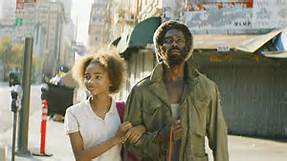 Cinequest screens several world premieres throughout its festival every year; however, none may have had as much impact as Princess of The Row on the loyal Cinequest audience.

The story follows 12 year old Alicia Willis (Tayler Buck), who has been around the block in the sometimes abusive foster system after her father Sgt. Beaumont Bo Willis (Edi Gathegi) comes back from Iraq with a major brain injury. Suffering from severe PTSD and brain damage, Willis lives on the streets of LA. The injury renders him unable to recognize his own daughter the majority of the time, but that doesn’t matter to Alicia, as she remembers the man he used to be. Inheriting her father’s creativity, Alicia loves to write and spends most of her time writing fantasy tales of a Princess on a quest. When Alicia’s social worker Magdalene (Ana Ortiz) finds Alicia the perfect home with award-winning author John Austin (Martin Sheen), Alicia is fearful she will never see her father again as Austin lives ten hours away from Skid Row.

Alicia runs away from Austin and his wife back to her father in the hope of living in peace in the dream she has created for herself. The film takes a dark turn in the middle when Alicia realizes what living on the streets will truly mean in order to survive. It’s an inspiring film which highlights the powerful bond between father and daughter, embodying the message that family is worth fighting for.

While Sheen will certainly be the name actor recognized, and he is great in his limited role, it is Buck in her film debut that steals the film as your heart breaks for the girl who wants nothing more than to be with her dad. Director/Writer Van Maximilian Carlson weaves a powerful story which touches on several important issues, including homelessness, veterans returning home, PTSD and the troubled foster care system. While the important questions the filmmaker raised are not easy and are certainly a commentary on a difficult set of topics which at times can make the audience uncomfortable. The crux of the film is of course between a father and daughter and the unbreakable bond the two share. The film at times is heartbreaking, touching, humorless, dark and will stay with you long after you leave the theatre.

While its world premiere run at Cinequest is officially over keep an eye out for more potential film screenings at other festivals around the country. Currently The Princess of The Row does hot have a distribution deal in place, don’t be surprised to find it being snatched up soon.