A comic that helped define the 80s independent boom, Matt Wagner’s Grendel started with criminal Hunter Rose. After Wagner brought that initial series to a close, he revived it collaborating with the Pander Brothers, making Grendel a legacy character that passed down to a new generation. Eventually, the Grendel became more of a spirit, morphing into a straight up science fiction series in the far future.

It’s a continuation of this idea that returns now from Wagner and Dark Horse, thus being a perfect point to jump on. Considering the quality of the previous volumes, this new book will be a great read.

Grendel Prime searches the stars for a new home for mankind, and Matt Wagner returns to his darkest creation! Today, Dark Horse is happy to announce a new Grendel series from Eisner Award-nominated creator Matt Wagner (Grendel, Mage), joined by colorist Brennan Wagner (Grendel vs. The Shadow, Batman), and letterer Dave Lanphear (Aliens vs. Predator: Deadspace, Mage: The Hero Denied). Grendel: Devil’s Odyssey sees Grendel back in action as he sets off into space to save humanity itself. This new series will see standard issue covers illustrated by Grendel creator Matt Wagner, with a special issue #1 variant illustrated by Eisner Award winner Fábio Moon and variant covers coming for all subsequent issues.

As civilization comes to an end on Earth, the final Grendel Khan gives Grendel Prime a new directive: Find a new home for the human race. But will the deadly and relentless paladin ultimately save humanity . . . or destroy it? Find out in Grendel: Devil’s Odyssey! 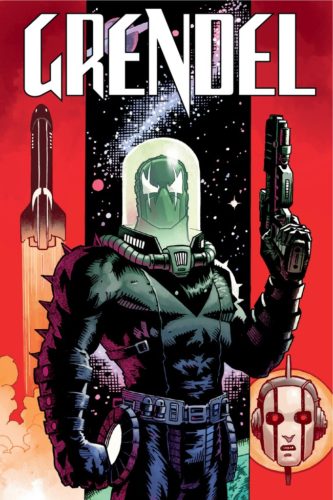 “Grendel is a brave and possibly even reckless experiment that has succeeded admirably.”—Alan Moore (Watchmen)

“Matt Wagner created a world for Grendel that is brutal, violent, tragic and sad. It’s also home to some of the best comic book stories ever created.”—Eric Robert Nolan (The Dogs Don’t Bark In Brooklyn Anymore)

“Grendel is a masterful creation that is ripe with inspiration and endless re-interpretation!”—Newsarama