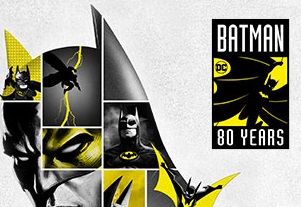 If you’ve ever fantasized at attending one of the Wayne Foundation’s fabulous fundraisers, this is your moment.

There are many comic conventions, but only one Comic-Con International. Called “the San Diego Show” by those who have been there since the beginning, or nearly so, it’s an event that has become linked to the beautiful California city, and when you get there, you wish there was a way to celebrate it any time of year. By creating the Comic-Con Museum, Comic-Con International wants to make that wish come true.

Coinciding with the 50th Anniversary of Comic-Con, the organization will launch “The Gathering” this year — a ticketed celebration of the Popular Arts to raise money for the museum. To be held from 5 to midnight on Wednesday, July 17, they’re kicking this inaugural annual gathering off by inducting one of the world’s best-known characters into its Hall of Fame — Batman.

Though the Balboa Park museum isn’t scheduled to open until 2021, it’s already planned to have a substantial Batman exhibit, likely on permanent display. For this year’s event, the space will be full of props and displays from the many, many media appearances of Batman, and something called “The Batman Experience Powered by AT&T.” (You may have read that at CES, a self-driving car display had a Batman-themed adventure — perhaps this is similar.) The invitation also promises special guests — I’d suspect you could catch a glimpse of Kevin Conroy or Mark Hamill… or both. Jim Lee? Scott Snyder? …Robert Pattinson? Who knows? But it will be fun to find out. 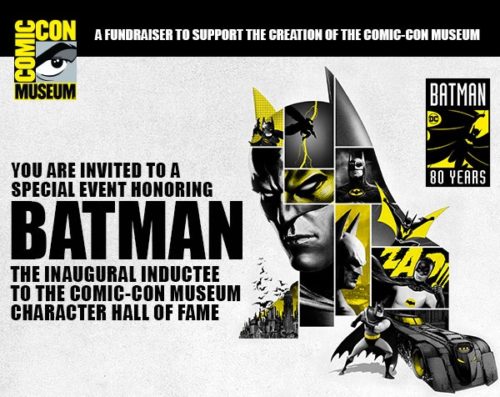 Tickets are still available here, in several tiers. For $750, you can attend the Black Carpet Reception at 5 p.m.; for $250 the actual induction ceremony at 7 p.m., and for $50, you can join the after-party at 9 p.m. and dance the rest of the night away in Gotham City. That’s actually 2131 Pan American Plaza in Balboa Park.