From page 2, writer Jim Zub and artist Lan Medina announce their intention to create a book that does what superhero comics should — thrill and amuse. They had me from a group of criminals who call themselves “the Scavengers,” pronouncing it so it rhymes with Avengers. It may be complicated to make that joke work on the page, but Zub does it, dang it, and thus we’ve got a tone.

Moreover, we’ve got a team of heroes that would have hooked in 7-year-old me — some familiar characters, some you think you might know, and then some flat out bizarre. It’s a line-up that Zub promises will change as adventures call for it. The title starts out with Black Panther, the Wasp, and Okoye of the Dora Milaje for those drawn in by the Marvel Cinematic Universe. But Zub and Medina also offer up Man-Wolf (please tell me Sony doesn’t own him) and kung fu master Fat Cobra — as the Wasp calls him, “…a walking cliche,” but to which he responds, “…yes, but a happy one.” 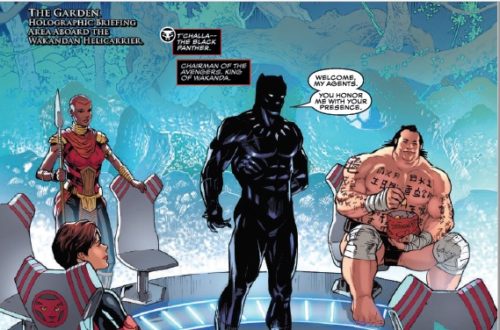 Though he serves as the chair of the Avengers, T’Challa has formed this group to handle those events the Avengers can’t. Take that to mean fewer star-spanning adventures (though a couple of aliens are on the larger team) and more quick fun adventures.

That’s another goal set forth by Zub — not writing for the trade, but creating 1 to 2 issue stories to make a book that starts and stays accessible. Maybe Black Panther will be on every team, and maybe he won’t. He is a king after all. But he’s also rapidly becoming the star of the Marvel Universe, and no doubt the lead of the larger plans for Marvel, with Disney attractions coming and a Phase 4 that needs someone combining the cool of Captain America and Iron Man. Looks like T’Challa to me.

Black Panther doesn’t need another title, but if it allows for a spotlight on more obscure characters, it had better be a good book. Zub and Medina, with color artist Marcio Menyz, have done more than that. They’ve offered a fun book. And those are the ones that bring me back. 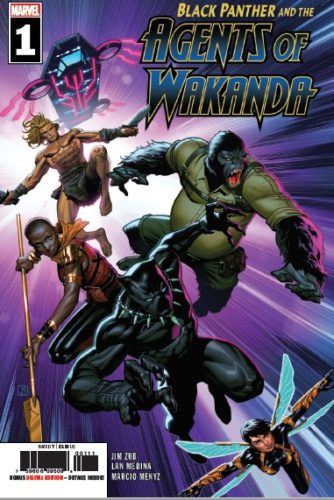