It’s been 7 years since I first met Conor McCreery at WonderCon to talk about this new book Kill Shakespeare. Since then, Conor and his writing partner Anthony Del Col have seen their series become a phenomenon, lauded and debated by Shakespearean scholars, turned into a multimedia stage play, and even become a board game (that’s this decade’s geeky highest honor). You may notice in our conversation today he even made a sly reference to an impending TV deal — and let’s face it, in the age of Game of Thrones, Kill Shakespeare is a no-brainer and please let me have a walk-on part, even if it’s only to get stabbed or poisoned. I’ve loved this book from the beginning.

Today, IDW releases the latest chapter in the Kill Shakespeare saga — a prequel of sorts that explains how Juliet Capulet, the bad-ass heroine of the original series, went from the ingenue of Shakespeare’s classic romantic tragedy to the woman of action comics fans came to know and love. Past Is Prologue: Juliet may even be my favorite mini-series within the series on the strength of the first issue, with some surprising guest stars from other Shakespeare plays — but then, that’s half the fun.

Conor agreed to answer a few questions via email, and I admit to being a fool for assuming that new series artist Corin Howell was male — my apologies for the assumption, and all I can say is, “lord, what fools these mortals be.” 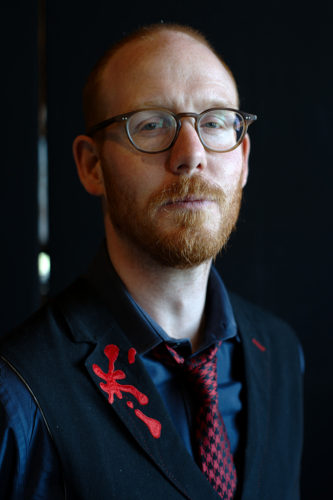 Derek McCaw:  It’s been a while since the last book in “Kill Shakespeare.” In the meantime you had a good run on Assassin’s Creed. What prompted you to go back and tell Juliet’s story?

Conor McCreery: Anthony and I had always wanted to get back into the Kill Shakespeare shoes, but between Assassin’s Creed, a couple of other comic projects, and working on a possible Kill Shakespeare TV show, we were running out of time to get to it. The Juliet idea was something the fans asked for really. We got so many people wondering how this ingenue from the play became this hard-nosed leader of men in the first books that we had to show them what happened.

Derek McCaw: How much of Juliet’s story had you had in your head way back when “Kill Shakespeare” started?

Conor McCreery: We had some — we knew roughly what had motivated her as far as Romeo was concerned. As for what gets her going in this new series, I won’t spoil it, we had a pretty good idea that that was going to happen from day one as well — although we changed a couple of things. At one point we had thought that maybe Lady Macbeth was behind Juliet’s second tragedy. That’s not the case in the book as it turns out…

Derek McCaw: From the very beginning, you portrayed Juliet as quite different from the play. This series goes back to show us a transition from selfish girl to woman of action — which really should resonate critically today. What inspired you to make Juliet an action hero?

Conor McCreery: We had always thought of Juliet as a much more active character than most do. If you look at her play she’s the one who pretty much runs everything. She’s the one telling Romeo to slow down in the balcony scene, and she’s the one taking all the risk. If Romeo gets caught with her, well, boys will be boys, right? If Juliet is revealed as having lost her virginity it could mean her life. She’s such a strong-willed character that we felt she WAS an action hero already – in the sense that she’s not the type to sit around and wait for something to happen to her.

I like to compare her to a modern day Princess Leia. Except one who doesn’t basically disappear after the first movie. 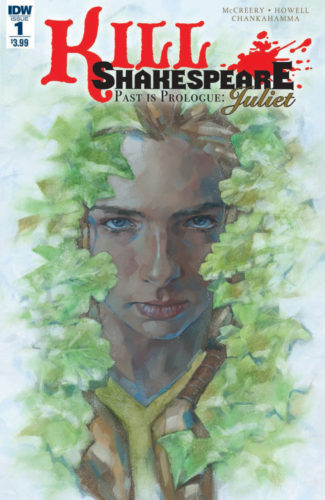 Derek McCaw: Do you have a map somewhere of all the connections you have made among plays?

Conor McCreery: A map? No…. a big long confusing list with lots of cross-outs, and scribbles? Yes.

Derek McCaw: Let’s talk about Corin Howell on art. What made him the right choice for you to continue the series?

Conor McCreery: Well first off, Corin’s actually a she, and that was definitely part of it. If I was going to be telling this coming of age tale of a young woman, then I really wanted to be able to work with someone who had, you know, GONE THROUGH that.

I actually first became aware of Corin through Janelle Asselin’s old “Hire This Woman” column and had considered her for a different project, but once Juliet crept closer and closer to fruition I reached out to her and pitched her the idea. Thankfully she loved it!

As for her skill-set and the fit on the book, Corin draws wonderful faces — she really nails the “Acting” elements of being a comic artist, and she has done some amazing background work, which is something I think original series artist, Andy (Belanger) really made a hallmark of the previous books. 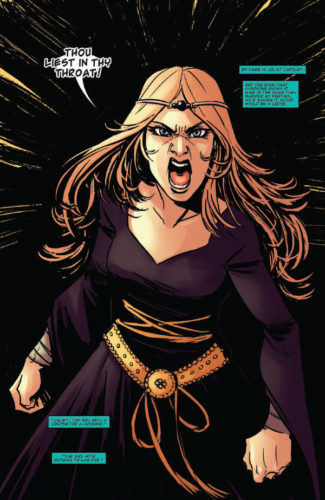 Derek McCaw: Is there any difference in the way you approach the writing for Corin than Andy?

Conor McCreery: Not a ton, no. The two of them are both such versatile talents that I don’t really need to change the way I work.

Andy B. was one of the rare artists who was totally comfortable taking a page and making it his own, he often put some pretty significant changes into our scripted pages and always had really interesting reasons for it. I think that was probably the skill I most under-rated. I just sort of thought ALL artists did that. As Corin and I get more comfortable with each other she’s been taking more and more initiative into changing the pages into something that fits her storytelling style.

Derek McCaw: You’re writing this solo, Anthony is writing The Hardy Boys/Nancy Drew solo. Is this break recharging, and you’re going to reteam for something HUGE?

Conor McCreery: Just a chance for us to a couple of different things. We’re working on the TV series every day together, so we’re still really working hard on Kill Shakespeare together. This gave us a chance though to try some new storytelling tricks. Work,ing with another writer is amazing, two brains! But it is also a bit of an exercise in compromise, and I think both Anthony and I were looking forward to doing our own thing as well. It’s kind of like the lead singer of your fave band doing a solo project, or the drummer joining one of those super bands.

Derek McCaw: I think I asked you years ago which Shakespeare plays were your favorite. After years of writing about characters in Shakespeare’s canon, has your appreciation of any of his works shifted?

Conor McCreery: The big one was seeing Othello push past The Tempest as my favourite all time play. I still love The Tempest, but Kill Shakespeare has made me really re-evaluate Othello and it just breaks my heart now.