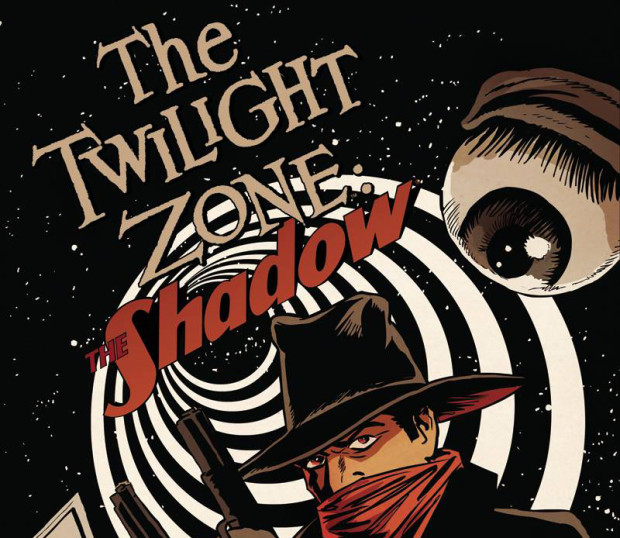 Last week, Dynamite Entertainment announced a crossover book between two properties that seem hard to connect, and yet, it makes a strange kind of sense. Twilight Zone and The Shadow? Stranger things have happened, and writer David Avallone is just the man to try and make it all make sense. We’ve known each other for a while, since before the multi-talented writer and filmmaker turned to writing comics. It was high time we sat down and did something formal for Fanboy Planet, and the chance to talk about a just-announced project was the catalyst we needed.

Also, the excellent blueberry pancakes at the North Hollywood Diner…

David Avallone: I thought it would be..

Derek McCaw: I love this place. You’ve just been announced as the writer of the new Dynamite Publishing cross-over… how should I title this?

David Avallone: I think because of the overabundance of “the”s in both of the titles…

David Avallone: I’ve been calling it The Twilight Zone/The Shadow. I think on the cover it says that.

Derek McCaw: There must be a title to the story… 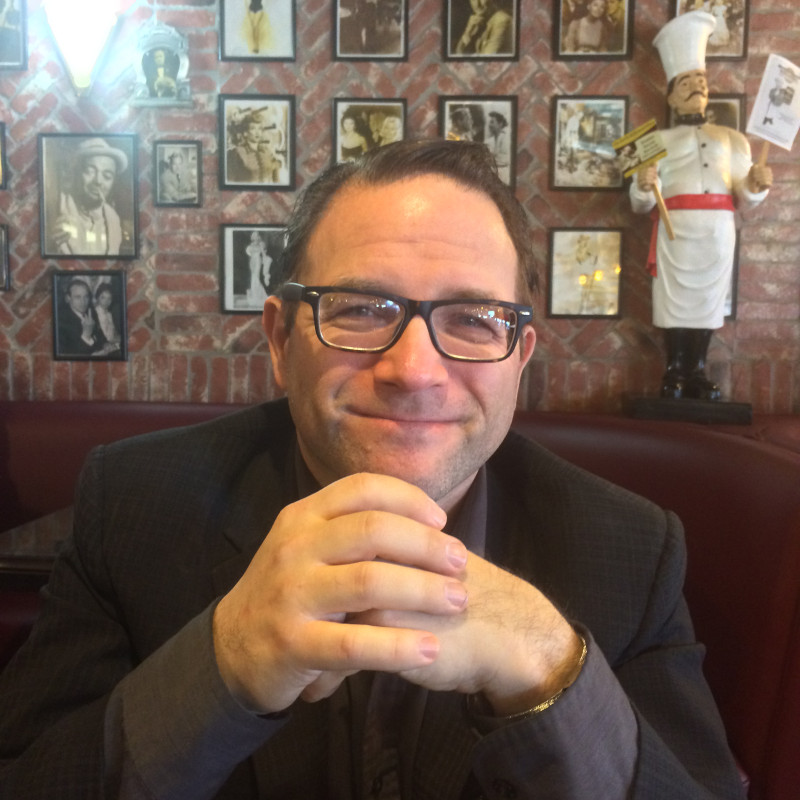 Derek McCaw: How did you get involved in this?

David Avallone: Sometime around Comic-Con I got an email from Joe Rybandt, editor-in-chief at Dynamite, saying… actually, it goes back. Last year I did two books that were “Altered States” – Dynamite’s version of “What If — ?” – and they did a Shadow, they did a Doc Savage, which I wrote both of those. They did Vampirella, written by Nancy A. Collins, and the Vampirella twist was great. They did what if Vampirella was a human astronaut who crashed on Drakulon, which I thought was a terrific story. Brandon Jerwa did a Red Sonja.

And I found out recently from Joe that where that came from was a desire to do something like The Shadow with The Twilight Zone, but they couldn’t work it out. Over the summer, Joe contacted me and said “we’re trying to do a Shadow Twilight Zone thing, so think about it. Try to crack it. Try to come up with a thing.”

I said, “so The Shadow is sort of an agent of the Twilight Zone,” and Joe said, “no, no, no, that’s not what they want at all.” We went back and forth on that a few times with me trying to make that work. And he told me what they want is something Twilight Zone-y happens to the Shadow.

But to me, the Shadow is a weird guy that encounters… he’s the weird thing in other people’s lives. But I went okay, and thought about it, and came up with a reason for odd things to happen to the Shadow. I’m trying to not spoil my own story, but the Shadow, like a character in a Twilight Zone story, encounters – for lack of a better word – himself. How the rest of the world experiences him. 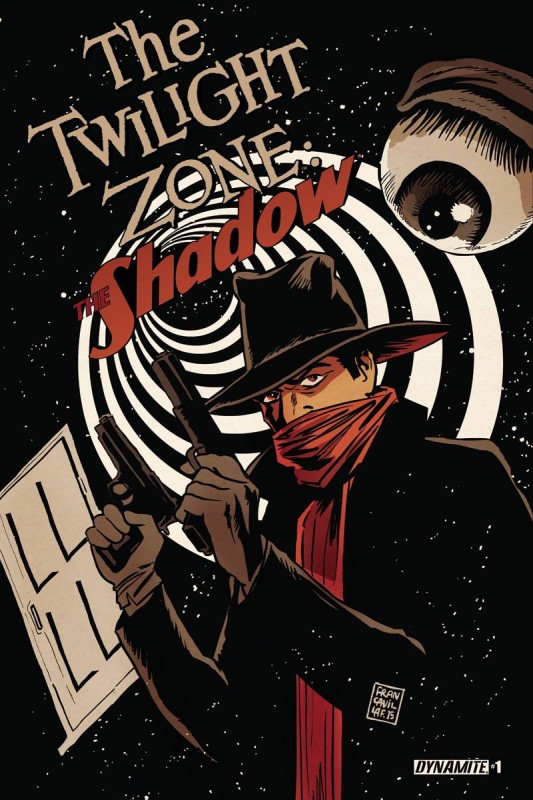 It’s a challenge, because in the pulps, everything about him is a mystery: his name, his origin. I’m dealing with, it’s what, 80 years later? 1931? I can’t really do this story and make the Shadow completely mysterious. But it’s sort of about he’s at a period in his career, the story opens in 1939, and he’s been doing it for a while. Maybe he’s lost touch with the idea that he’s ultimately helping people and doing good. Maybe he’s erring too hard on the side of “I am crushing evil.” At all costs, with no thought about any consequences for anybody else.

With any project like this, as I discovered with Doc Savage, something that people have loved for many years, and here I’ve got both the old-timers and the young-timers who love The Shadow, and the baby boomers who are obsessed with The Twilight Zone… I’ve got two whole universes to piss off people with how I handle things.

Derek McCaw: I want to talk about that, because I remember how much online blowback you got for your Doc Savage Altered States. But there was nothing about it, when it finally came out, that contradicted… it WAS a Doc Savage adventure.

David Avallone: I kept having to say he is absolutely Doc. I will admit, I wanted to make it – I won’t say it was a joke – but when they came to me with the title, I wanted to make it “Doc Civilized.” For those two books, Joe came to me with a premise – one sentence each. He said something like “Doc Savage regresses to being a caveman,” something very much like that. And I’ll admit that because it’s one of my favorite books and one of my favorite movies, even though Paddy Chayefsky hated what they did with the movie, I said, okay, it’s called Altered States, let’s have Doc Savage have the Altered States experience. He does a scientific experiment and essentially becomes a caveman. It’s very much a Ken Russell thing that I have him experiencing the world as a prehistoric hallucination. I thought that would be interesting to draw, and Dave Acosta drew that…

Derek McCaw: Who is working with you on Twilight Zone/The Shadow…

David Avallone: Yeah. Since I’m a brand-new comic book writer, coming to this very late in the game, that was the first time I was allowed to… well, I came on early and said, “hey, can I have Dave Acosta back?” I really like the way he drew the 1930s and I liked his characters and I thought, for the story I’m telling, I want it to look like THAT. I want what he did for my Doc Savage, because again, I thought he did a tremendous job.

We had a good working relationship and we still do. And The Shadow stuff… I have some of the pages, and he absolutely nails it. The very best thing about being a comic book writer is the emails with the art. That is the best. That every day, or every other day, you open your email and there’s some… because no matter how well you wrote it, you’re going to be surprised.

And I’ve been incredibly lucky to have nothing but amazing artists who did amazing work. Translated the scripts beautifully, or in one specific case, read my mind a little too well. I wrote one piece for The Shadow pitch – “he’s in the future, fighting aliens” – and what I came up with was that a computer program – a bit of a lift from Philip K. Dick’s Time Out of Joint – the Earth is about to be invaded, it’s the 30th century, and there’s a computer that runs all of Earth’s defenses. It fears that it’s been too long since there’s been any kind of war. It’s not savage enough, and it has predicted that it’s going to lose. So it reaches out through time and space for something savage and violent to help it protect the Earth, that’s a genius level tactical intellect. And it happens to find the Shadow while he is astral projecting and sucks him into the future. And it tests him on a gameboard floating in space, which I will admit I ripped off from a Steve Gerber issue of Mister Miracle many many many years ago that no one remembers, thank god.

I described the computer program as appearing like a beautiful woman whose face is formed out of stars, hanging over the thing. I said nothing about her hair. Nothing. Half-way through writing the comic, I went, am I making this character sound too much like Ilia from Star Trek the Motion Picture? Nah, it’s fine. No one will pick it up. It’s a good character, it works.

I get the pages – she’s bald and she looks exactly like Persis Khambatta. And I went, “damn.” On some level, Ivan Rodriguez (the artist) felt me. 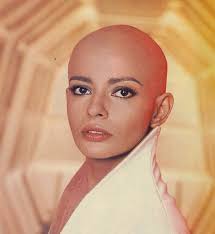 I’ve been very very happy. That was a long digression to say that The Shadow and the Twilight Zone are two of my ten favorite properties of that kind in the world. It was a trick to find a way. I actually re-read The Twilight Zone Companion cover to cover. Not so much to strip mine it for plots, but what are the tropes of the Twilight Zone? What happens in every episode, what is it over and over again? It’s people confronting themselves.

So I was like, what’s the version of the Shadow confronting himself? To me, the interesting part of the Shadow was his multiplicity of personas. That there’s the Shadow, and I use the pulp character about 98%, and the radio show character about 2% as inspiration. He’s really Kent Allard, flying ace of World War I. Lamont Cranston is a real dude whose persona he takes over from time to time. “Stay home, I’m putting on your tuxedo and going out to parties without you.”

But I also use, again not to spoiler myself, but I also use those Twilight Zone tropes of what if you aren’t real? What if you’re just a character in a radio show, or something like that? So that’s basically how the series runs. It’s about the Shadow learning about who he has become through other people’s eyes.

We finished our breakfast and spoke of other things. We plan to have David on the podcast once the release date in April gets closer…