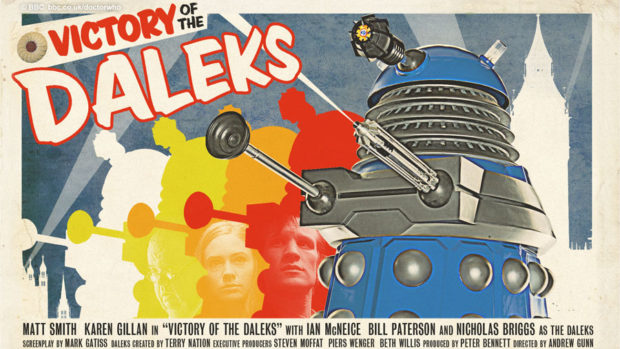 Just in case you haven’t heard, the Daleks are back! Again.

Steven Moffat’s decision to bring back the show’s most iconic (or most overused) villain may have been a bit premature—it’s only the third episode for Matt Smith’s Doctor, after all—but mix these pepper pots with Winston Churchill, World War II, and Nazis, and you’ve got a story that will make fans forget about the Dalek overkill. At least that’s what we hoped would happen.

Answering a distress call at the end of last week’s episode, the Doctor and Amy Pond arrive in the middle of the London Blitz and find themselves walking around the Cabinet War rooms with Churchill himself. But it’s been a month since Churchill had called the Doctor, and it turns out the prime minister no longer needs the Doctor’s help, thanks to a new secret weapon that will help Britain win the war, Bracewell’s Ironsides—or, as the the Doctor knows them, the Daleks. 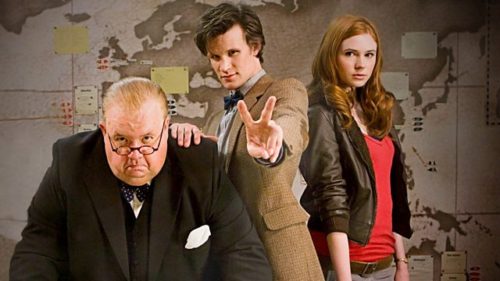 Supposedly invented by the genius scientist Professor Bracewell, these Ironsides behave like the perfect warrior and servant, effectively shooting down Nazi Heinkel bombers in one scene and offering the Doctor a cup of tea in the next. Unfortunately, only the Doctor sees through the Dalek’s military green façade, and this puts him in conflict with Churchill who would desperately do anything to win the war—even if that means stealing the key to the TARDIS. Ian McNeice gives us an amusing portrayal of Winston Churchill, though McNeice plays him more like a cartoon of the great wartime prime minister with all his zealous speechifying. However, Churchill and the World War II backdrop quickly end up taking a back seat in a story that is ultimately about the return of the Daleks.

Without spoiling too much, the Daleks’ guise of helping the British battle Nazis eventually falls apart, and the Doctor learns that he has been lured to WWII for one purpose—to witness the resurrection of the Supreme Dalek race. “Observe Doctor, a new Dalek paradigm!” screeches one as the Doctor looks on in disbelief.

Apparently, along with a new TARDIS, new theme music, and a new Doctor, Steven Moffat also wants to give Doctor Who fans a new reason to fear the Daleks—something unrelated to the fear of excessive Dalek exposure. And he’s giving us not just one new Dalek—but five! 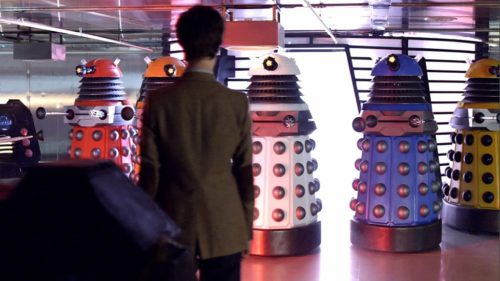 The sleek gold casing of the Russell T. Davies era has been replaced by Moffat’s own set of Mighty Morphin’ Daleks. Each color represents a different role on the Emotional Spectrum: the Drone, the Scientist, the Strategist, the Eternal, and the Supreme.

With a newly designed eyestalk and bulky metal hump, they are literally bigger, but are these Technicolor Daleks actually better? I really miss the simpler, classier design and their new colors fall a bit flat. Hopefully Moffat will deliver on this promise of a more brutal and menacing Supreme Dalek race, as there is no doubt that they will return sometime in Moffat’s run. Just preferably not anytime soon.

Although we were never treated to any out-and-out Dalek vs. Nazi warfare (too bad because that would have made one awesome episode), Mark Gatiss’s “Victory of the Daleks” still succeeds as a good episode of Doctor Who.

We also get another look at the Doctor’s chilling rage, something Matt Smith is proving to be very good at, as he faces a group of humans who refuse to listen to his warnings. “What does hate look like, Amy? It looks like a Dalek.” Hate is especially disturbing when mixed with the Doctor’s greatest fear, as it causes him to attack a Dalek in a frustrated attempt to get it to reveal its true intentions. 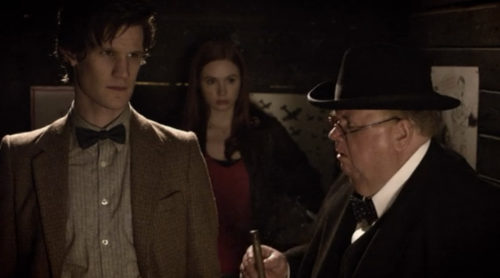 The Doctor and Amy’s relationship also takes another intriguing turn. In addition to once again playing a very essential part in saving the day, Amy also realizes just how unsafe life with the Doctor can be: “And here’s me thinking we’d just be running through time, being daft and fixing stuff. But no… it’s dangerous.” Even so, it still seems like Amy is treating her adventures with the Doctor like a child’s game, rushing into situations with a worrying lack of fear.

The most striking thing about this episode is the new mystery surrounding Amy Pond (who in this episode finally gets to wear some real clothes instead of her pajamas or that kiss-o-gram police uniform). When Churchill refuses to believe that Bracewell’s Ironsides are really an evil alien species, the Doctor asks Amy to tell Churchill about the Daleks, alluding to the events of “The Stolen Earth” and “Journey’s End.” “What would I know about the Daleks?” she says. “Everything. They invaded your world, remember?” replies the Doctor, but Amy is still at a loss.

Wait, what? The fact that Amy remembers nothing of the Daleks both worries the Doctor and leaves us viewers wanting for answers. “You didn’t know them, Amy. You’ve never seen them before and you should’ve done. You should.” Does this have something to do with all those mysterious cracks? Most likely, but just like the previous seasons’ story arcs, we probably won’t find out until much, much later.

For next week’s episode we do get to see at least one mystery resolved. Moffat brings back an old friend from series four (Hint: “Spoilers!”), as well as his most popular and frightening creation, the Weeping Angels. Better start practicing for those staring contests now.