After fourteen years of waiting, Amy Pond finally gets her long-promised ride in the TARDIS as the Doctor’s newest companion. For us viewers, we get our first outing with the completely regenerated and properly clothed eleventh Doctor.

It’s the 29th century and incredibly hazardous solar flares have forced the people of Earth to flee to the stars until their world becomes inhabitable again. And so, the Doctor and Amy stumble upon the enormous Starship UK, a floating metal landmass carrying the entire population of the United Kingdom — except for Scotland, which wanted its own ship.

Steven Moffat jumps straight into the mystery in his second episode as producer, having the Doctor go into detective mode when he spots on the TARDIS monitor a child crying silently in the London market and instinctively senses that there is something strange is plaguing the citizens of Starship UK.

“Look at this place. Isn’t it wrong? Use your eyes, notice everything. What is wrong with this picture?” says the Doctor to Amy as they begin to investigate their strange surroundings. Nothing is ever what it seems in the Who universe — but this episode seems to follow the typical “something’s not right here; let’s go figure it out!” plot structure of Doctor Who. 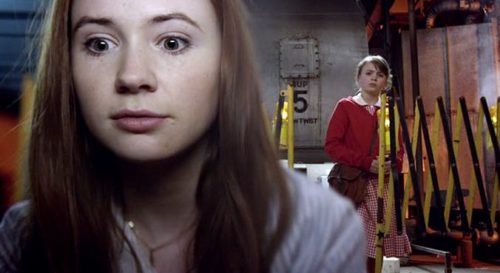 Not that it’s necessarily something to complain about, since Moffat nicely sets up the mystery behind Starship UK. What is the significance of the glass of water? Who are the hooded men watching from the surveillance cameras as the Doctor and Amy explore the hidden recesses of the ship? And who is the woman in the porcelain mask?

Moffat gives us a new monster in the form of robotic watchmen called Smilers. The Smilers could have been more frightening, though the artificial grins and lifeless eyes on their face-changing, rotating heads (think The Exorcist) still have a creepy effect. I had expected these monsters to play a more central role in the story, but they are pushed to the sidelines as an even greater problem is revealed.

Karen Gillan maintains Amy Pond’s feisty personality and boldness, which ultimately play a part in strengthening her relationship with the Doctor. For Amy’s first adventure in the TARDIS, “The Beast Below” is surprisingly heavy and trying.

Moffat came very close to shattering Amy’s fairytale image of the Doctor by having her experience the Doctor’s rage so early in the series. This episode is all about making difficult choices, and the Doctor’s own “impossible choice” forces him to take the morally questionable compromise. “I have to find a new name because I won’t be the Doctor anymore.” 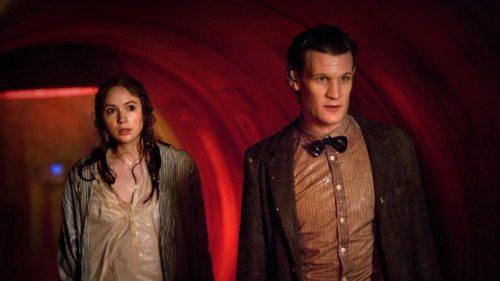 Disturbed by his decision, he takes out some of his anger on Amy, blaming her for unwittingly making a very “human mistake”. The Doctor’s unforgiving attitude towards her actions is unexpected, especially at such an early stage in the Timelord-companion relationship.

Matt Smith handles the Doctor’s rage in an interestingly quiet way, keeping his emotions bottled up until he eventually snaps in fiery frustration. As the series progresses, I am eager to see how Moffat and Smith explore more deeply the darker sides of the Doctor and if there will be any more moments of uneasiness that will test the friendship between the Doctor and Amy. 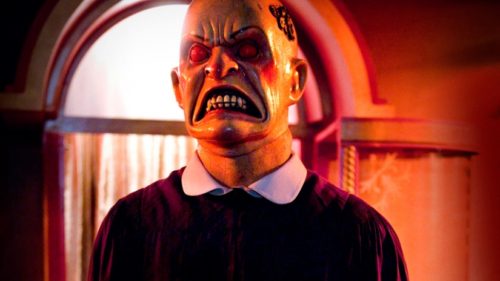 Compared to the mad dash that was “The Eleventh Hour,” this second episode feels noticeably slower. The pacing and lack of a proper villain may bother some, but the development of the Doctor and Amy’s relationship and the exploration of morality are what made “The Beast Below” a fair follow-up to the series premiere.

Fortunately, it looks like the energy level will be turning up a notch as right before the credits Moffat sneaks in a nice teaser for next week’s episode. The British Prime Minister (don’t worry, it’s a fun one this time) phones the Doctor, asking him for help with a “tricky situation, potentially dangerous”, and we catch a glimpse of a very familiar pepper shaker-shaped shadow lurking in the background.