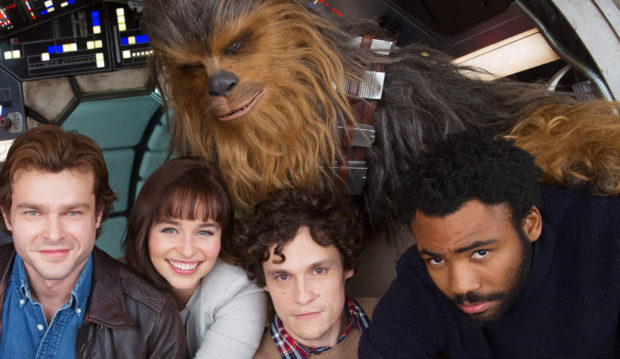 Principal photography began yesterday on the as yet untitled Han Solo solo film, though most people refer to it as Young Han Solo. To celebrate the beginning, StarWars.com posted a picture of the cast this morning, crowded into the cockpit of the Millennium Falcon.

Directors Phil Lord and Christopher Miller (The LEGO Movie) posed with Woody Harrelson, Phoebe Waller-Bridge, Alden Ehrenreich, Emilia Clarke, presumably Joonas Suotamo as a young Chewbacca, and Donald Glover. Only Suotamo, Ehrenreich (Han Solo), and Glover (Lando Calrissian) have been identified in their roles — and Suotamo has some experience subbing in for Peter Mayhew in the more athletic Wookie scenes of The Force Awakens. We know that Harrelson will be a roguish mentor figure, naturally. But Waller-Bridge, Clarke, and the not pictured Thandie Newton play completely unknown characters.

As both Ric and I have lamented on the podcast, it’s too much to hope that this will draw from the Brian Daley Han Solo Adventures, books that kept fandom alive between The Empire Strikes Back and Return of the Jedi. But rumor has it that Harrelson’s mentor does pull in elements from other “Expanded Universe” characters — let’s remember, though, that’s just rumor. 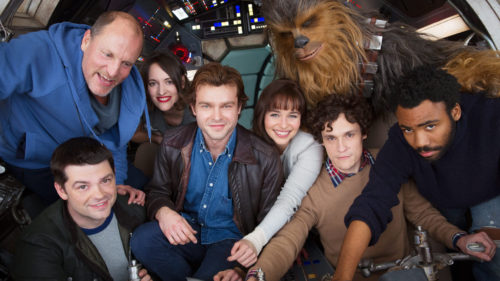 In addition to Lord and Miller directing, the screenplay is by Lawrence Kasdan and his son Jon. We talked briefly about it with Kasdan last year at Cinequest.

Keeping with tradition, the movie is being shot at Pinewood Studios in England (the one in Atlanta, Georgia is currently busy with another “War”). It’s slated for release on May 25, 2018.