Anyone reading this site or listening to the podcast knows our credo: use your powers only for good. Saturday at Gallifrey One, attendees of the Pop Culture Hero Coalition panel were reminded just how powerful they can be. The organization, founded by longtime attendee and transmedia star Chase Masterson (Star Trek: Deep Space 9, The Flash, Vienna for Big Finish), works to raise awareness (and money) for anti-bullying efforts in schools, at conventions, and… well, wherever its powers are needed. As Chase said at the panel, it was originally the Pop Culture Anti-Bullying Coalition, but she really wanted the message to be more positive — that people need to be (and can be) the heroes that the world needs.

Could there have been better proof than the panel that Chase assembled? In addition to herself, Chase brought Suleiman Bakhit (an activist, TED Fellow, and comics creator in Jordan who is working to provide positive stories and role models for children in the Arab world), United Nations Association President Bettina Hausmann, Legion of Leia founder (and pop culture commentator) Jenna Busch, gaming insider and attorney Angelo Alcid, and scientist/writer Phil Plait (aka The Bad Astronomer). To tie it directly to Gallifrey One, Chase invited Sixth Doctor Colin Baker to join the conversation.

As the hour progressed, Baker was visibly honored to be a part of this panel and moved by the stories being told. That extends to his own experience and reflections on bullying, including what he described as his “Road to Damascus” moment, captured on video here:

Don’t think that these panelists aren’t put on the line for their outspokenness. Busch, who started the #WheresRey movement to persuade Hasbro to do what should have been no-brainer things like including a Rey playing piece in the Star Wars The Force Awakens Monopoly game, said that she gets called the “C” word online at least four times a day. “Creative?” someone hopefully shot back from the crowd. Alcid and Plait both acknowledged that the risks they face are far less, though they are horrified by the behavior of cyberbullies (and real world bullies), in particular for the GamerGate scandal.

Taking it a step further, Plait admitted to being a middle-aged white guy trying to be better. As such, when he comments on issues such as equality, he doesn’t attract nearly the same kind of vitriol that Busch and others endure. For himself, he observed that the word “privileged” to describe his upbringing is inadequate. “Privilege” should be a positive thing that everyone has an equal shot at earning. Instead, he prefers the word “insulated.”

Bakhit has faced challenges and censorship from the Jordanian government, but was happy to announce that his comics are being published as textbooks for Jordanian schoolchildren. In 2006, he was set upon by extremists, who tried to cut out his eye. The scar that now runs down the left side of his face stands as a testament to his belief in his work and has “…considerably improved (his) dating life.”

Hausmann grew up in East Germany, and has seen first-hand the effects of bullying in adult life. When the opportunity to ally the United Nations Association with Chase’s coalition arose, she jumped at it.

What can you do to help? Start by checking out the Coalition’s website, perhaps donating to the cause, or volunteering your services. It’s never too late to use your powers only for good. 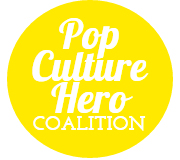