A. David Lewis has been a comics writer, publisher, and noted academic for over a decade. I first met him in San Diego and devoured his graphic novel Mortal Coils (almost Black Mirror before Black Mirror) and later found The Lone and Level Sands. Since then we’ve occasionally chatted about issues around comics, representation, politics, and religion.

A few months ago, I recommended his webcomic Kismet, Man of Fate, published online through A Wave Blue World. This week, Kismet gets print publication, in a graphic novel that I’ve been eagerly awaiting. David agreed to answer a few questions about the project — a revival of a Golden Age hero, both explicitly and vaguely Muslim, who had a very brief run in 1945 before slipping into the public domain. What David and artist Noel Tuazon have done with the character, however, is not what you might expect.

Derek McCaw: What drew you to this character originally?

A. David Lewis: He had this strange nobility, sort of a panache, that I was surprised to find in a comics character from the 1940s, particularly a non-Caucasian, non-Christian one. In bringing him to the present, I’ve kept him from being too precious, too holier than thou, but I like to think that strength of character remains. Sometimes, in describing the series quite quickly, I shorthand him as “the 1st Muslim superhero who I did a ‘Captain America’ with and brought to the present,” but I hope I’ve made Kismet a bit more grounded than Cap. Kismet never became an icon, and, instead, he had just as much a responsibility to himself and his principles as to the people he wants to help. I think it helped that, even in the 1940s, he wore no mask and seemed to have no secret identity: Kismet, of all things, came across as genuine. 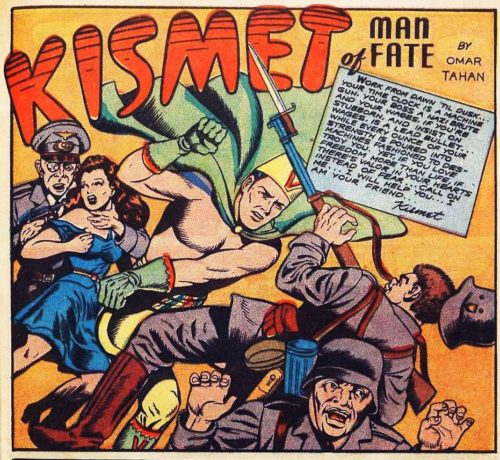 Derek McCaw: I know this will be an awkward and naive question. With Kismet and characters like the Green Turtle in the Golden Age, is it fair to say that there was a very brief WW2-era embrace of diversity, even if it was muted and often ignorant?

A. David Lewis: Saying that there was an “embrace of diversity” may be taking it too far. Instead, for the more liberal-leaning comics creators of the Golden Age, I think there was a fascination with other cultures, even if it was only at the surface level. Though it came much later, a key example of this was Stan Lee and Jack Kirby’s treatment of Norse mythology for Thor in Journey into Mystery. That is, they obviously thought the Nordic mythos was compelling and rich — but mostly so that it could be applied to their entertaining ends. I doubt there was any real thought given to the real-life practitioners or inheritors of this lore, just as I think there was little deference given to Muslims or Asians with Kismet and Green Turtle, respectively. There may be something complimentary in comics creators seeing the potential for this non-Western material to fuel their stories, but it was largely Orientalist and filled with Anglo-centrist presumptuousness.

Derek McCaw: You took an interesting and different direction with Kismet’s revival – early on, he turns his back on the standard superhero career, instead working to empower others. What drove that as a story idea, and is that A. David Lewis speaking loud and clear?

A. David Lewis: Yeah, it’s me. [Laughs.] Look, I love superheroes, and they’re a major source of inspiration. But it didn’t feel particularly important for me to publish my take on the superhero; at least, that’s not how I wanted to utilize Kismet. If I was going to bring him out of the public domain, if I was going to put him back in print, it had to be for a reason. Initially, that reason was Islamophobia. Then, it became my response — or my responsibility — to Islamophobia as a white, liberal convert to Islam, as a progressive Muslim. 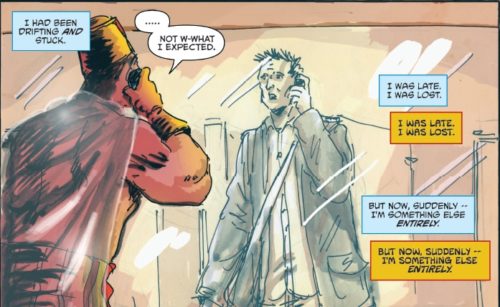 Finally, though, by the time A Wave Blue World expressed an interest in doing a long-form Kismet story, it became about the state of American politics and the threat of home-grown fascism. Antifa worried me, but martial law worried me more: yet, I couldn’t rationalize vigilantism for Kismet without endorsing other physical conflict. So, as “cool” as fight scenes are (and, in all honesty, there are still a few in this book), I had Kismet make the choice that both working through activism and empowering other voices was the best use of his abilities.

Derek McCaw: What made Noel Tuazon the right collaborator for this project?

A. David Lewis: Noel is super-talented, just look at Elk’s Run or, even better, Tumor. In addition to being a generous collaborator and a thoughtful creator, Noel also recognized that we weren’t going for the traditional “superhero look” here. I needed someone who could both humanize these creators, showing a range of responses and emotions, while also making them distinct and attractive. And, to be honest, I needed someone reliable and steady as well as talented; Noel has become a good friend, even through our all-online collaboration, and he continued to prove himself up for the challenge of this project, in all its evolving forms. I would like to take credit for this brilliant pairing, but it just worked out that Noel’s illustrations combined with Rob Croonenborghs’s rich color work made for beautifully evocative scenes and environments. I think Kismet has a look that is unmistakable.

Derek McCaw: How did you get involved with A Wave Blue World, and is this the comics publishing model of the future?

A. David Lewis: When I “discovered” Kismet (i.e. found out he was in the public domain and untouched since the 1940s), I also learned that my old colleagues at Broken Frontier were planning an anthology. The circumstances were perfect: Noel, Rob, letterer Kel Nuttal, and I were going to do a 10-page Kismet story, his last WWII adventure, and the Broken Frontier Anthology was a great space to feature it. As it happens, A Wave Blue World (AWBW) organized and published the anthology, so we call became familiar with each other. 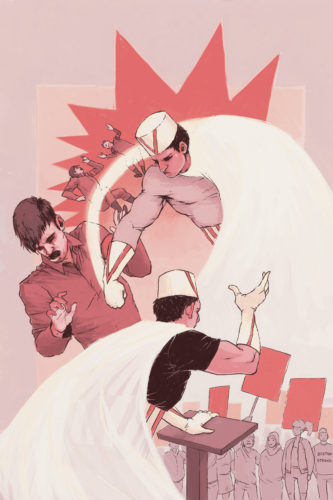 I do like the model we’ve developed with AWBW: Their “Under Current” initiative has our pages debut weekly on their site for dedicated online readers, which is then later collected into print editions for purchase. Also, having Kismet remain creator-owned was very important to me, and publisher Tyler Chin-Tanner has given my teams complete creative control. (The only thing he had to veto was our reproducing the full lyrics to a David Bowie song, if only to avoid litigation.) I’m hoping that sales on this first volume of Kismet, Man of Fate are strong enough to argue for our continuing with the next volume.

Derek McCaw: You’ve carved a career that melds religion, academia, and comics – Kismet provides some statement on that, but what is it that draws you to all three?

A. David Lewis: I wish I had some coordinated reason for my professional interests! As it is, I’ve now built healthcare management, nonprofit work, and graphic medicine into the mix as well. Certainly, these don’t replace my earlier passions, since literary theory and narratology also remain, which predate my interest in religion, etcetera. I guess I’m just working my way blindly/intuitavely to my own “Grand Unified Theory,” or I’m keeping things fresh in my mind. They don’t feel disconnected to me, though, or entirely distinct. If anything, I enjoy the alchemy of mixing and matching them, blending them into some novel concoction. In its own way, that’s what led to the mechanics of the comics medium in the first place and its continuing expansion. To quote Warren Ellis: Change or die!

Derek McCaw: So I’m telling everyone to buy and read Kismet, Man of Fate. What are YOU reading?

A. David Lewis: Well, I tend to have a whole bunch of books going at the same time, honestly. To keep up with my kids, I’m finally reading Harry Potter and the Prisoner of Azkaban, but for my graphic medicine research, I’m reading Rita Charon’s Narrative Medicine, Arthur Frank’s Wounded Storyteller, and Peter Dunlap-Shohl’s My Degeneration. I’ve got a signed copy of Elizabeth Warren’s This Fight Is Our Fight that I’m moving through, and I’m a third of the way through Alan Moore’s Jerusalem. Omid Safi’s collection of Sufi poetry translations Radical Love keeps me going most days, and my weekly comics pulls have recently included Mister Miracle, Infidel, Ms. Marvel, The Black Monday Murders, Seven to Eternity, and a number of projects from Bad Kids Press.

Thank you to David (and Noel), and be sure to pick up Kismet, Man of Fate, at your local comics shop on Wednesday, November 28!