I first met comics creator Keith Champagne at a Comic-Con many years ago, when he invited me to join him for dinner with a group of artists including Tom Nguyen. At the time, Champagne had been mostly known as an inker, including on high profile projects such as Firestorm for DC. He was starting to make a name for himself as a writer, with issues of JSA and Green Lantern Corps under his belt; with Peter J. Tomasi, he co-created The Mighty, a 12-issue creator owned series originally published by DC Comics. He’s done a variety of projects, writing WWE comics and the Western Death Valley, as well as maintaining steady work as an inker. Nguyen has as well, often recognized for his work over Doug Mahnke’s pencils.

Now, Champagne and Nguyen are about to launch a Kickstarter campaign for a creator owned. UPDATE: The campaign is launched! Go here!

Derek McCaw: First off, The Switch. Tell us what it’s about.

Keith Champagne: I’ll not only tell you what it’s about, m’man, I’ll also tell you how it was inspired. Whenever possible, I try to germinate ideas from a place that feels true. If I can find a theme, something that everyone has experienced or can relate to on some level to build a story on top of, I feel like I’m off to a good start.

The Switch comes from the idea that, as we get older, we change and sometimes grow apart from people that, in our younger days, we could never imagine not being an important in our lives. I think most people, when they’re growing up, have a circle of friends. Those relationships become automatic; we don’t really think about them, they’re just a part of our lives. We take them for granted.

But sometimes, people grow in different directions. Sometimes, people pick their heads up, look around at their circle of friends and think, “do I have anything in common with these people anymore?”

And then I started thinking about a group of supervillains. Let’s say you’re a member of The Legion Of Doom and one day you look around at your fellow villains and you realize you’ve got nothing in common with them anymore. You don’t really even like them; in fact, they’re kind of a terrifying group to be around.

What do you do?

And that’s what The Switch is about, a supervillain named Electricia who is at a point where she’s questioning this life she chose for herself. How did she get here? Who are these people she’s surrounded herself with? What has she done with her life? What can she possible do to start over? Those questions were the starting point for this character’s journey. 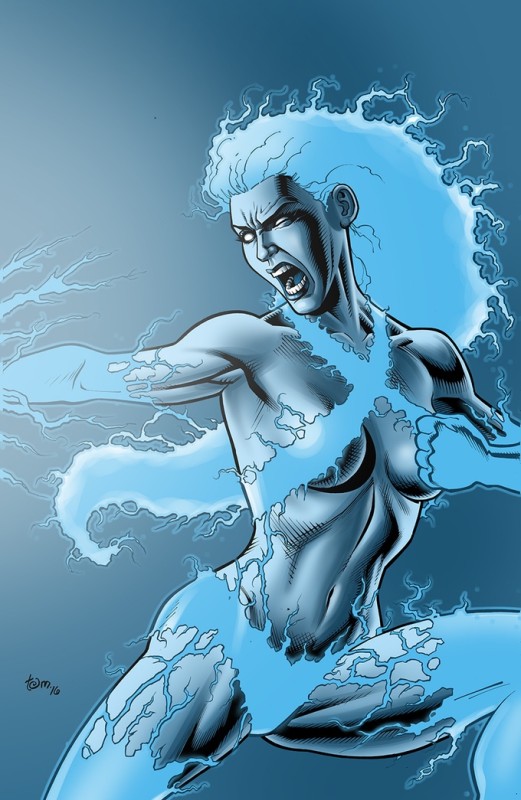 Derek McCaw: Who came to who with this project? Did you approach Tom Nguyen, or did he approach you?

Keith Champagne: Tom and I are great friends, he’s one of my favorite people both in and outside the industry. We’ve talked for a few years, off and on, about developing a project together. The last thing we produced was an WWE Undertaker series for Titan Publishing.

So once in a while, we’d bat ideas around but could never seem to find anything we both wanted to do. I was into doing a teenage samurai project, Tom wanted to draw a grim and gritty Santa Clause adventure. I came up with the initial idea of The Switch and we both agreed it was worth developing further.

In keeping with the theme of the project, Tom keeps trying to outgrow me but I just won’t let him!

Derek McCaw: What inspired the project?

Keith Champagne: Ruminations about life while driving my kids back and forth to karate, mainly.

Derek McCaw: Do you believe in redemption?

Keith Champagne: I honestly don’t know. I believe people can choose a different path and make better choices in their lives but if someone does something really heinous, it’s impossible to overcome. I know if Charles Manson got out of jail and moved next door to me, even if he was the greatest neighbor in the world, I’m still not forgetting he’s Charlie Manson.

A person may be able to find peace within themselves by living their lives in a better fashion but in the larger picture,  I’m not sure if there’s really such a thing as redemption. But it’s definitely something to shoot for in the case of Electricia.

Derek McCaw: How does the creation of this book work? Are you and Tom co-plotters, or do you go to him with scripts fully fleshed out?

Keith Champagne: Every story is different. In this case, I just gave Tom the fully-fleshed out script. When I can I like to go off and write in a corner, alone with my thoughts and ideas, especially when it’ s something coming from a personal thing.  I imagine my version of the story as completely as I can and for me, the collaboration comes from seeing Tom re-imagine the stuff I’ve given him, filtered through his own creative vision.

I always tell the artists I work with that just because I asked for four panels on a page or a certain perspective on a scene, to chuck that aside and interpret it through their own lens. 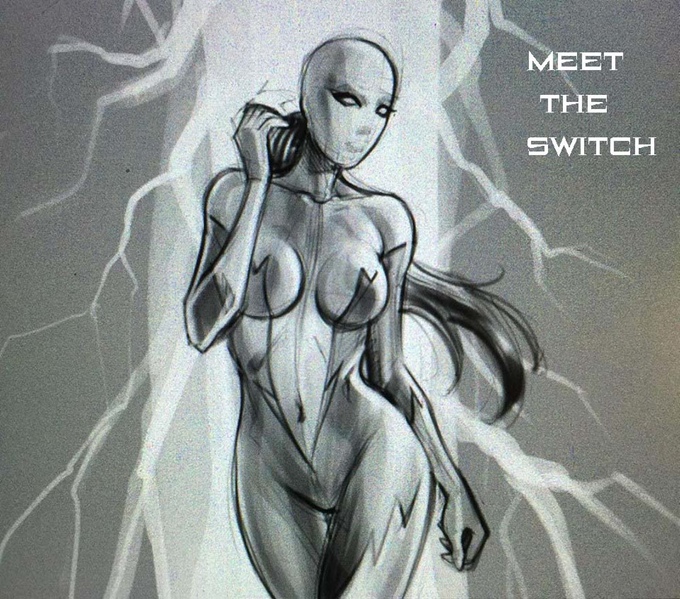 Derek McCaw: Why go Kickstarter and not pitch to a company like Image?

Keith Champagne: First of all, the idea of building a direct relationship with readers is very interesting to Tom and I. At conventions, we always treat people who read our work like they’re our close friends because that’s how we both feel. A kickstarter is an organic continuation of that relationship. We’re asking them, “is this something you’d like to read by us?” If they fund the project, we know we’re doing something that people are going to enjoy.

It’s also a very quick decision-making process. Sometimes pitching to company is a process of eight to twelve months of waiting to hear if a project is going to be picked up. Maybe not for everybody, I’m sure Mark Waid gets more priority. But while that pitch is tied up, there’s no way to make a living off of it.

With Kickstarter, we’re putting it out there and in 30 days, we both know if it’s going to click or not. It’s a very efficient blessing that way.

Derek McCaw: Your rewards have some other well-known artists doing pieces for you (Jerry Ordway, Doug Mahnke, Leonard Kirk, Bill Morrison, and many more). How did you get them involved?

Keith Champagne: Yeah. We do! And they mainly got involved because we know a lot of really awesome people.

Tom and I really put a lot of work into making our Kickstarter campaign something different and a big part of that was finding a way to give readers something they can’t normally get through a campaign. So we asked a bunch of our friends if they’d donate sketch rewards. Every single one of them said yes, which is amazing! It’s a huge list of names, guys like Pasqual Ferry, Pat Gleason, Doug Mahnke,  Jerry Ordway, Khoi Pham, Leonard Kirk…we’ve got a good 25 guys lined up to help us out so by all means, check out the kickstarter for the complete list.

The way we’re going to work it is that we’re starting out  with four guest artists offering rewards. As soon as one of them gets taken, we’ll add another artist. So if your favorite artist isn’t up there at first, keep checking back! We’d hate for anyone to miss out.

Also, when we hit the stretch rewards phase of the campaign, we were lucky to have an absolute legend of comics agree to donate a sketch reward. Just one of the nicest guys. Wait’ll you see who it is! 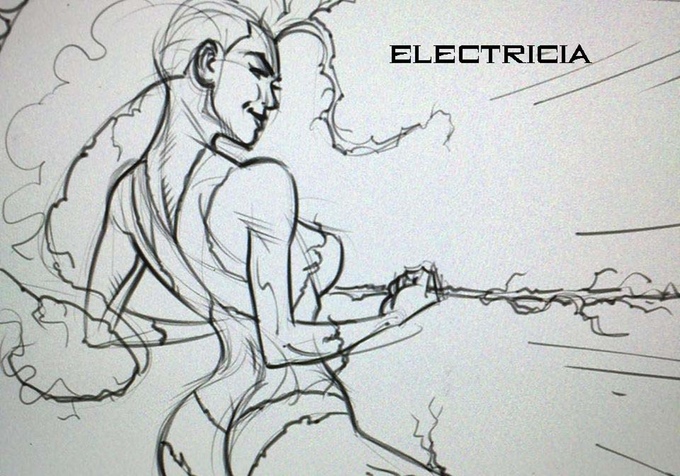 Derek McCaw: I think that the last time we really talked, your oldest son had just been born. Do you find that your approach to writing, the things that interest you, has changed now that you’re a father? Are you seeking to create work to inspire them?

Keith Champagne: I don’t think that I’m trying to inspire my kids but I am conscious that at some point when they get older, they will probably want to read the stuff I’ve done. That’s usually in the back of my mind.

Derek McCaw: I love Tom’s art, but I am curious: why don’t you pencil?

Keith Champagne: I honestly just enjoy writing more. I do have one personal project that I’ve set aside for myself , something that I want to do for my kids when they’re grown, that eventually I’ll get around to doing completely on my own: write, pencil, ink, letter, color…thank God for computer lettering because I’d be screwed without it, I’ve got the worst handwriting.

But really, Tom is the perfect artist for this one. Very few people draw the female form better than he does and there’s also a sense of humor in his work that fits The Switch perfectly. This one is a match made in heaven, it’s totally the Tom Nguyen show and his work on this is going to finally show people how great he is. He’ll be too in demand to work with me again.

Derek McCaw: Can you tell us if anything is happening in Hollywood with The Mighty?

Keith Champagne: I’m sorry, our connection cut out for a sec. Hey, I’ve gotta wrap this up, it’s pizza night and the kids are waiting on me.

Derek McCaw: Will we see you back on the West Coast any time soon?

Keith Champagne: It’s not in my immediate plans. I don’t enjoy the San Diego convention anymore, the last time I went I spent half the time in my hotel room because it was so crowded. But who knows? Stranger things have happened.

Derek McCaw: Are your eyelashes still as thick and lustrous?

Thanks for your time and thanks everyone for  your help with The Switch!

And we thank Keith for the conversation. Check out The Switch on Kickstarter, launching Wednesday, February 17!