Doomsday Clock is a title that proves to me I have a problematic addiction to comics. As much as I admire the artwork of Gary Frank and the effort of Geoff Johns, Doomsday Clock #3 finally brought together all the things that have been bothering me, even as I want to be excited.

As the previous issues have, it opens with a direct homage to Watchmen. In this case, Johns and Frank revisit two iconic pages from that game-changing work and then add a third page that undercuts those pages. Essentially, by this continuation (if you read it), the classic pages don’t matter. What you felt is undone in order for Johns’ secrets of the DC Universe to keep unfolding. While not as guilty of rewriting its inspiration as Highlander II: The Quickening, these opening pages left a bad taste in my mouth.

The “homage” goes further. An aged Johnny Thunder waits for his granddaughter to visit him in a senior facility, crosscut with scenes from the last “Nathaniel Dusk” movie, being watched by a couple in the rec room. With this, Johns kills two birds with one stone: he has a sort of Hollis Mason figure with Thunder, and “Nathaniel Dusk” becomes this sequel’s Tales of the Black Freighter.

And, of course, the presence of Johnny Thunder must mean something about the JSA coming back, as was teased in DC Rebirth and the Batman/Flash crossover The Button. Both of those stories also teased characters from Watchmen — but the more I read this, the more I’m convinced it just didn’t need to be those characters. Heck, Grant Morrison even gave DC an alternate earth where the Charlton Heroes (inspiration for Watchmen) had become more like Alan Moore’s pastiche — so we could have Captain Atom and the Peacemaker wreaking havoc on Earth-Prime.

And yet… there are cool new elements. Though I’m convinced the Mime’s abilities violate the rules of the original Watchmen saga, he and his wife Marionette (analogs to the Charlton characters Punch and Jewelee) are disturbing and thrilling, with Johns setting up a great confrontation for the next couple of issues. The characterization of the new Rorschach ends up being more logical than I thought it would be, deepened and intriguing. 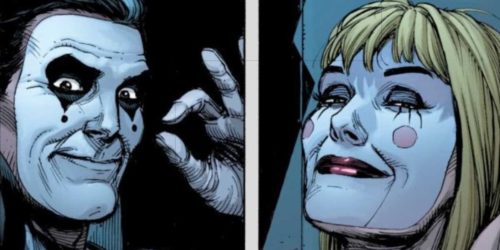 As on the nose as it might be thematically, seeing Nathaniel Dusk brought at a diagonal angle to the DC Universe was a surprise. It acts paradoxically as a reminder that this series really is key to the History of the DC Universe while also pointing out that every personal piece of work that any creator ever did for DC is just a puppet for whoever has editorial control. Want to really honor Don McGregor and Gene Colan’s work, DC, and not just pick its bones? Collect the two mini-series into a trade. (Also, side note, let’s get the original Silverblade back, too.) 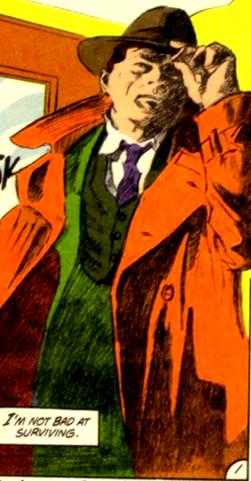 We buy this series because at this point, what else are we going to do? It’s not the excitement of “what happened to the characters in Watchmen years later,” because that book was so perfectly self-contained. It’s because it’s what we do as fans. And if this review has been obtuse, full of character references that you, dear reader, don’t understand, that points to another problem that DC (and Marvel) have — once again, they’re really only looking back to serve the readers that have been there forever, instead of getting new readers excited and involved. Doomsday Clock is a good series. At least, that’s what I’m telling myself to justify why I’m going to keep reading it. But I’m also not sure that I’m right.