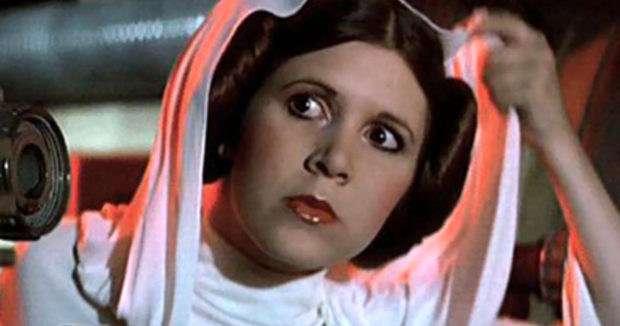 Jordan Hembrough, popularly known as the Toy Hunter, posted this reminiscence of Carrie Fisher on Facebook this morning. With his permission, Fanboy Planet reprints it here. Because Carrie Fisher in person was bold, bawdy, and honest, some of the language herein may not be suitable for younger readers.

Thank you, Jordan, for letting me run this.

A STAR WARS STORY
Good-Bye, Farewell and Fuck You Carrie Fisher:
My Love Affair with A Princess

I’m not going to lie; the death of Carrie Fisher has had a profound effect on me. Being a Star Wars fan and growing up with the original trilogy, I am not alone when I say that she was a huge part of my childhood and formative years. To wit… Princess Leia was my first girlfriend.

I was seven at the time and saw Star Wars on a family vacation in Maine, with my twin brother. While he enjoyed the movie he was more interested in cars and motorcycles than missing droids or heroic missions throughout the galaxy. My brother has always been centered in reality, the “here and now.” I on the other hand, tend to cast my gaze towards the heavens and ponder about life on other planets and worlds not of the Universe. I guess that’s why my twin finds himself the Vice President of a major car corporation and I find myself doing… well, whatever it is I do. 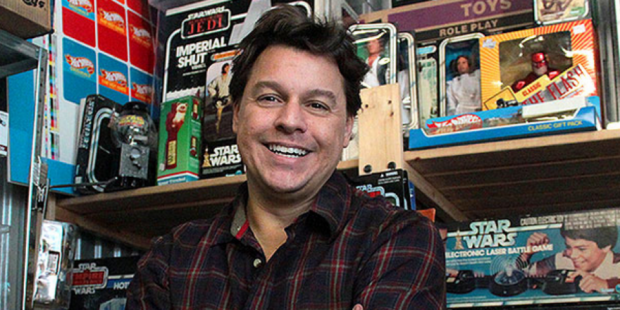 I’ve made my career in pop culture. I sell toys, I consult with production companies and theme parks… I appear every now and then on a morning talk show. I show up… give a few witty sound bites and pick up a paycheck. Done and done. But more than just being the TOY HUNTER, I help people rekindle their memories of their youth. I help bridge a gap between the innocence we lost as a child and the burdening responsibilities we have as adults. I fly around the world delivering toys to adults… that they once had as children.

Not a day goes by that the Star Wars franchise does not creep into my life in some way. Whether in the mainstream media or someone’s toy list.. I am surrounded by a Galaxy, far, far away. I find myself thinking more of my youth… more of the innocence of 1977, and of my “first girlfriend.” 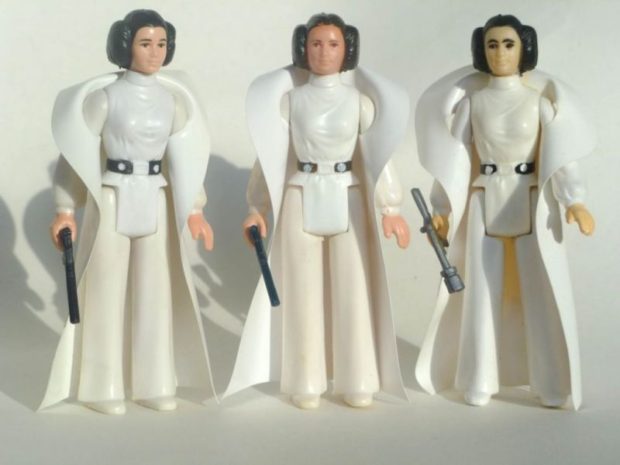 Carrie Fisher was Hollywood Royalty. The daughter of Eddie Fisher and Debbie Reyonolds… her home growing up was a virtual hot spot of Hollywood elite. After her work in the original Star Wars trilogy… she worked on other films; When Harry Met Sally, The Blues Brothers, The Burbs… etc.

All of this you may already know. All of this… is documented. But what Carrie meant to the fans and how she interacted with them, is not so known to the public. And let me tell you… she was one of kind. Unabashed and unapologetic … she brought her bawdy sense of whit and dirty humor to every convention and event… and the fans ate it up. They loved her.

Carrie knew what people wanted, and knew how to give it to them. She walked the fine line between being the ICON that so many people wanted her to be… and the ever-approachable “normal person” others knew her to be.

Carrie could look a small child in the eye and smile.. telling her how pretty she looked dressed as Princess Leia, while the next moment turning around to another fan and firing off a dirty joke or limerick. Her sense of humor was quick, he whit was sharp… and for the most part, she was always the smartest person in the room. 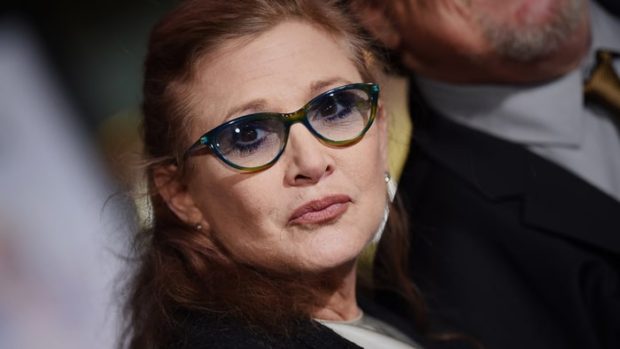 Carrie not only broke the mold, she smashed it to make sure there were none after her.

I spent yesterday re-connecting with old friends talking about her. We shared our stories, told each other our experiences at conventions and other work related events. We laughed, some cried… we hurt together. And it was good.

The stories we shared were as varied and far reaching as the Galaxy Lucas created more than 35 years ago… and while I listened, I took notes. I mean… literally took notes. Here are some of my favorite Carrie Fisher quotes…. as told to me by friends and fans who witnessed them.

“You look so sweet honey. How old are you? Well.. that dress looks better on you than it ever did on me.” ( To a small child at Star Wars Celebration III)

“Did that guy just walk up and ask for my autograph while wearing a Star Trek uniform? What an asshole.” ( To another fan in line at Star Wars Celebration IV)

“Look how great you look. You have great tits, I never had tits like that.” ( Told to a friend of mine who was dressed as Slave Leia )

“You should meet my daughter, Carrie. I’ll tell her you say hi.” (Carrie to a fan who yelled to her from a convention floor… calling her Debbie)

“Can someone please get Gary a Coke? If he doesn’t get a Coke he will shit all over the floor and I ain’t cleaning it up.” ( As told to a handler while on a press tour for Force Awakens. Gary Fisher, is her dog). 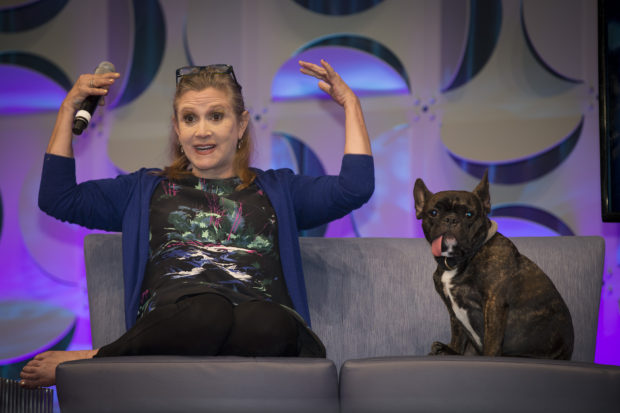 My experience was just as unique, and just as memorable. It was during Star Wars Celebration III and after the very first day, all the dealers were exhausted. I had left the convention floor but needed to run back to my booth because I left my money bag sitting on the stool behind the counter. I snuck into my 20ft booth and disturbed the drapes we laid over the counter to prevent theft. Everything fell and I had to scramble to get it organized before the event staff kicked me out again.

As I turned to exit the booth… there in front of me, was Carrie Fisher with two handlers. She was walking back from the autograph area through the dealer section and stopped to look at some of the displays.

(extending my hand) “Carrie? Hey, I’m Jordan Hembrough. You probably don’t remember me. I worked for Starlog and we met a few times. Good to see you again.”

Carrie smiled and shook my hand and looked at me with a sort of quizzical expression on her face. To this day I’m still not sure if she was trying to recognize me, or I had egg salad left over from lunch on my face. She pulled me close and touched my arm.

“Did you sell me prescription drugs?”

She turns and walks two feet before I see her smiling and turning back toward me. I walk up to her with my arms opened…

“Really… fuck you Carrie.” And… I’m laughing as I say this because I see she is now smiling.

The handlers are totally oblivious to this interaction.. and I start to apologize until one says ” It’s fine, she’s been doing this all day.”

That was the last time I saw her in person. My last interaction, that made… a lasting impression.

So with that I say Goodbye to my first girlfriend. Goodbye to a Princess. Fuck you Carrie Fisher… and I will miss you dearly. 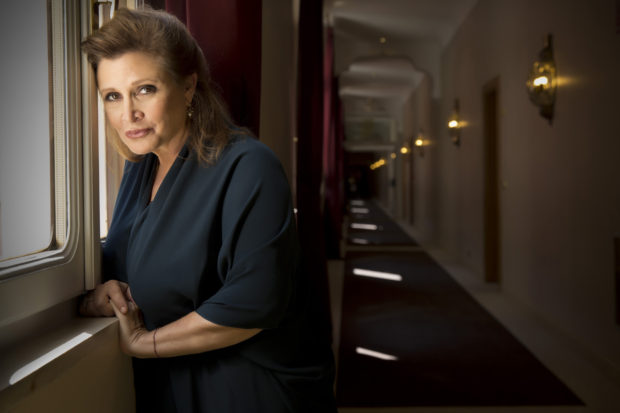