Even the most well-meaning of parents are often mystified by their geeky children. They love us, sure, but when you post pics on Facebook of yourself at this year’s Ren Faire they “Like” the picture, but never comment. You get the sense that if this was anyone else in a corset and a highly anachronistic hat-with-a-ship-on-it, your parents might roll their eyes at someone like you. But because you are their child, they try–really hard–to accept it. To accept you.

Your family’s bemused kindness at your lack of fitting-in skills is never more apparent as it is during the holidays. You go to the dinners, you seek out the best gifts you can find for your loved ones. You pretend to watch football with your uncles, because you genuinely love to see them.

The reality, though, is that the holidays can be uniquely lonely for geeks. We know that we’re supposed to be on board with this flagship of mainstream culture, this enshrinement of traditional religion and consumerism, but the gulf between how we feel and how we’re expected to feel can be discouraging. After all, you love your family too, and your dad worked so hard on the tree this year. But the truth is, Christmas can feel like a reminder of how little you feel you belong.

This cult staple was born in the late eighties in Minnesota, and I got into it again because the new cast was touring to promote the reboot. When they came through San Jose, my husband and I went to the show. We sat behind a woman with an undercut almost as Vikings-y as mine and a guy in ornate professorial robes but with no visible reference to Harry Potter. A few rows back was a bootleg Tom Servo. Blue hair was everywhere. I looked around and uttered an audible sigh of relief: here were my people. I forgot how good it felt not to stick out.

I was so impressed with the live show that I went home and Netflixed the taped one. I didn’t binge-watch; I don’t have that kind of attention span, but during the second episode of the reboot–I think it was Cry Wilderness, a tale featuring Bigfoot and a disturbing amount of inappropriate chuckling– I had that same feeling: I’m among friends.
I can’t explain it exactly, and yes, I realize how weird it is to feel like you’re friends with people on TV. But here are my best guesses as to why watching the new MST3K felt like coming home and why you, too, should consider letting the Satellite of Love soothe your nerves this holiday season.

You’ll feel seen
The works cited in the riffs are reminders that there are other people on the planet who share your cultural references, and what’s more, you and your weird people are numerous enough that someone made a show for you. Monty Python, Weird Science, Game of Thrones… The casting alone is like a whole bunch of people saying, “We know who you wanna see!” and then finding them and hiring them. Patton Oswalt and Felicia Day serve as anchors, and wait til you see who Day’s long-distance love interest is. I won’t ruin it for you, but if you’re like me, when he shows up you’ll shriek like a joyful pterodactyl. 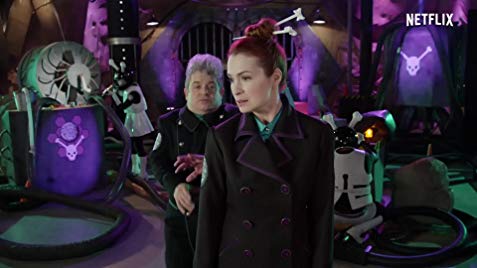 The humor is kind
Geekdom is getting better at inclusivity, but as a woman, I often feel sad when I see… most things. Even modern movies still manage to surprise me when they throw in sexual assault as a plot device (thanks, Overlord). But the new MST3K not only avoids the easy sex jokes, but also stays away from low-hanging appearance-focused jabs and calls out the constant misogyny in the old films they’re riffing on, without being preachy.

I didn’t note any references to racism, but that might be because they didn’t choose films with people of color in them. This might seem like an oversight, but considering the prevalence of casual bigotry in all of film history, the absence of any racial stereotypes in twenty episodes begins to seem less random. This might be a function of the fact that one of the writers and the voice of Tom Servo, the brilliant Baron Vaughn, is a person of color. This is what happens when you hire brown people: less bullshit around race.

Not everyone will get everything, but everyone will get something
Alongside Animaniacs references are shout-outs to Joanna Newsom and Ray Harryhausen. There’s even an entire segment, called “Concepts,” based on The Music Man— which, by the way, is so good that it alone is enough to justify giving the series a try. If you just want to watch that one episode, the movie they riff on is called The Day Time Ended. Vaughn’s performance will blow you away. Trust me. 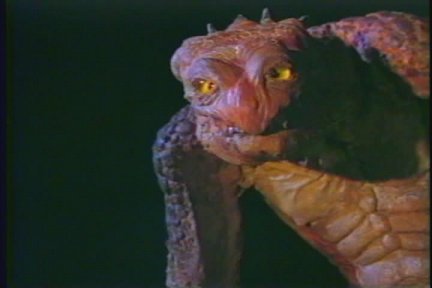 The live MST3K show my husband and I attended was conceived to promote a new set of episodes released on Thanksgiving, called “The Gauntlet.” At least one episode in this set contains an explicit mention (a whole segment actually) about turkey, and the acknowledgement of the start of the holiday season by a show aimed at folks who often feel unseen by mainstream culture felt like a cold drink of water in a desert of sameness.

It’s likely that I’m suffering some millennial nostalgia, as my relatively new adultiness makes me miss feeling safer in my strangeness because I was a kid. But the MST3K reboot is–there’s no other way to say it–comforting. Little swearing (and no hardcore words), but still a blast for adults; funny, smart, and relatable; interesting enough to sit down and watch, but episodic enough to leave on in the background as company.

It might even be appropriate to turn on after presents with the fam, or while you help out with Christmas dinner. It’s entertaining enough on its own, but it’s also geeky enough to perhaps help your loved ones get to know the adorkable weirdo you really are.

Hey — Editor’s note here — if you have a chance, you should pick up Lauren’s impactful non-fiction book, The Beauty Suit. You can order it here!

About Lauren Shields 2 Articles
Lauren Shields is a pastor and improvisor living in Silicon Valley. Her first book, The Beauty Suit: How My Year of Religious Modesty Made Me a Better Feminist, will be out through Beacon Press on May 15, 2018.