We talked about this on the podcast last night, but not a lot of information was available — we’d just picked it up on the wind. This, however, bodes really well. Not only does this book look like a lot of fun, Automatic Publishing isn’t just offering an excerpt for Free Comic Book Day; they’re giving us the entire first issue of the four-issue mini-series for free. This is the publishers’ first major offering that steps outside of Frank Beddor’s Looking Glass Wars (which you really should have checked out by now), and it’s bound to make a splash, along with a LOT of good will among fans. So hang on tight and get ready for Spectrum, the show within the show that is Con Man. Pick it up, and then tell your friends!

When Alan Tudyk and Nathan Fillion crowd-funded their hit web series Con Man last April, the sci-fi fan-favorite actors struck a chord: a 735%-funded campaign at $3.2M that quickly became the largest crowd-funded web series in history. Now, the record-breaking duo are lending this magic to a comic book series. Spectrum, based on the show-within-a-show featured in Con Man, debuts on Free Comic Book Day next May at comic book stores nationwide.
Con Man, which starred Fillion (Firefly, Castle) and Tudyk (Firefly, Rogue One: A Star Wars Story) as actors from a canceled cult sci-fi show, was a comedic look at the wild world of fandom and conventions. Spectrum will tell the story that launched their careers. In the comic, a vicious attack from an alien invading force devastates the globe, but the prophetic dreams of Captain James Raaker warn that the suffering has just started. Humanity’s last hope is escape in an untested spaceship built by a madman.
“In the world of Con Man, Spectrum has given my character Wray Nerely a huge fan following,” Tudyk said. “A comic book is the best way to tell the story that ignited that fandom. It’s the serious sci-fi story, inside the comedic story, told inside a comic book that is sold inside comic book stores. Every good Con Man needs a comic.”
The four-issue series from Automatic Publishing will be written by Tudyk and novelist/producer PJ Haarsma (The Softwire Series) with artwork by Sarah Stone (Transformers) and overseen by Shel Dorf Award-winning editor Shannon Eric Denton. The Free Comic Book Day offering is not a sampler or a preview, but the actual first issue of the series.
The first season of Con Man is now available on Vimeo, and centers on Wray Nerely (Tudyk), who has struggled to find his big break following the untimely cancellation of Spectrum, while his friend Jack Moore (Fillion) has become a major celebrity. Jack enjoys the life of an A-lister while Wray tours the sci-fi circuit as a guest of conventions, comic book stores, and pop culture events. The show explores the crazy (and real) behind-the-scenes antics in the world of fandom. 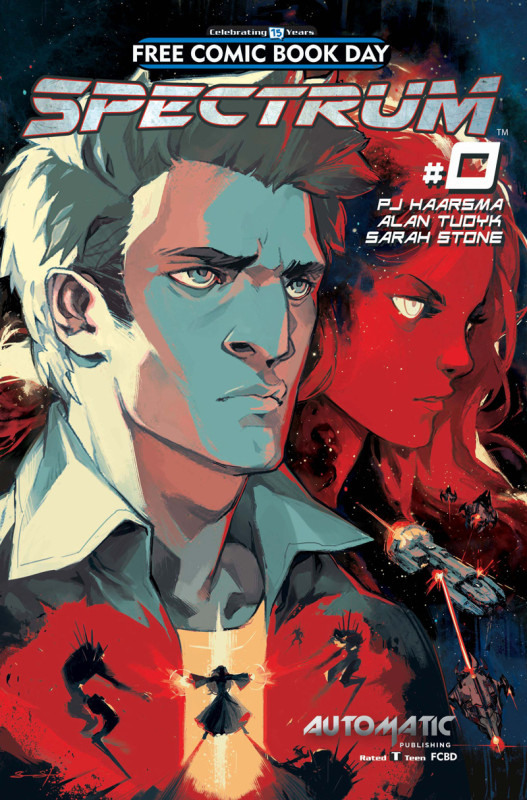 ABOUT PJ HAARSMA
PJ Haarsma is an award-winning Canadian born science fiction author best known for creating the Rings of Orbis universe, which encompasses The Softwire series of books and now the Spectrum comics. His production company Redbear Films creates content for film, television, and video games as well as ads and multimedia productions with over 300 awards to date for prestige clients such as Burger King, Sony, NFL, and Hewlett Packard. He resides in California with his wife and two children. Haarsma is currently writing Spectrum novels slated for release in 2016. For more information on Con Man, please visit www.conmantheseries.com or the Con Man Facebook and Twitter pages. To download and watch Con Man, visit vimeo.com/ondemand/conman.
ABOUT AUTOMATIC PUBLISHING
Los Angeles-based Automatic Publishing focuses on story projects that inherently harness the imaginative energy of authors, artists and fans. The company has developed a unique marketing strategy that focuses on the very personal author-reader connection, operating on a continuous marketing model that ensures books connect with audiences where they are: in schools, in stores, in libraries and online. In addition to Spectrum, Automatic Publishing’s Spring 2016 slate includes the novels Hatter Madigan: Ghost in the Hatbox and Static; and the graphic novel Looking Glass Wars: Crossfire.