It’s Sunday, and there’s an extra stack of comics for me to read, because yesterday was one of the most important holidays for a comics fan: Free Comic Book Day. Actually, it really isn’t for die-hard fans, though they all show up. It’s for those people who are just discovering comics. Originally created by Flying Colors store owner Joe Field twith the idea, as he put it, “…that comics are, on their own, the most awesome entertainment medium.” As the first one fell on the opening weekend of Sony’s Spider-Man, the two became linked in the public’s mind. Field further explained, “the fact that a big movie also debuts the same weekend as FCBD is testament to the power of comics as the creative force behind the movies. In short, comics drive the train and are not the barnacle on the bigger movie ship.”

Since its inception, Free Comic Book Day has ballooned from a few offerings from major publishers to… piles and piles of books that mean anyone stopping by would have to be able to find something that appealed to their taste. 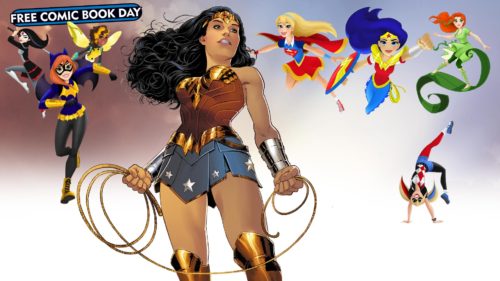 My first thought was that was kids, and there were plenty of books available for children. But is Adam Hughes’ Betty & Veronica quite the kid-friendly book that old-school Archie Comics were? No matter, there’s still Spongebob Squarepants. Marvel divided their line — with an All-New Guardians of the Galaxy (what will Marvel do the next time around? Brand Spanking New Guardians?) to tie in to the movie, and a glimpse of the most controversial book of the week, Secret Empire. DC offered DC Superhero Girls featuring a young Wonder Woman, and a reprint of the sublime Wonder Woman: Rebirth for older readers. Wise move, DC. And there’s no way kids should be near Grimm Fairy Tales from Zenescope — good book, just not for bringing in an audience under the age of 12.

But it isn’t just about comics; it’s about community, and most stores do a good job of showing off what kind of community they offer. Of course Illusive Comics & Games could capitalize on that; their location is actually pretty perfect for events. It wasn’t that fine a line between the Franklin Mall Farmers’ Market and Free Comic Book Day, which meant that the Day was more a Free Comic Book Festival.

Owners Anna Warren Cebrian and Mark Anthony Masterson brought in cosplayers — and cosplayers came of their own accord — with the added bonus of Belle performing a magic show and wandering the line making balloon animals. In the middle of the store, an art table was ready for younger kids who did not want to stand in line.

The event was actually subdivided. To get the actual free comics, one had to stand in a line that wrapped around the building, entering into the back space of the store usually used for art classes. Initially, patrons had an option of three free comics — and let’s face it, these comics are not free for retailers — but for additional donations to Parents Helping Parents, you could pick up more.

Then as a matter of good form, hey, why not actually spend a little money helping the store? The line to buy comics inside Illusive Comics was almost as long as the line to get free comics outside. What was most amazing? Everyone was happy, and as the line snaked around, people were chatting excitedly, talking about various comics and shows and… what do you know? It’s a community.

So if you dropped by a comics shop for FCBD, I’m hoping you plan to stop by sometime when the comics aren’t free, because what you should have picked up is that the best retailers are cool places to be. I loved being able to be there for Illusive Comics & Games, but also wish that I could teleport down to shops in L.A like Earth-2 Comics and The Comic Bug. There’s probably a really good place near you — find it here: