In Part One of this interview, model-actress Gina Gatto talked about becoming an action figure.

In today’s section, she goes on to discuss her last minute casting in Comic Book: The Movie, and her hopes for what it may become. Also, how does one go about reversing that hyphenate, and becoming an actress-model?

Gina Gatto: I love her. I love that character.

DM: The story I was told is that the guys in the cast just met you in the hotel.

GG: Well, what happened was Jess (Harnell), he does animation voice-overs, for all I know he does other things as well, he had seen me, maybe, I don’t know. And he left his number with the valet people to give to me but they never did.

The next day they ran into me at the convention. They said they wanted me to be in the movie, and I said, call my manager, here’s the number for the details, because I’m working. I really can’t do anything. By the end of the day, they were calling me saying, can you be here at this time? I’m like, fine, I can be there by this time but I need to shower. So I took a shower at their hotel. I left a message saying I wear a size 10 shoe, because I’m used to fittings and everything for acting. I know they didn’t know my shoe size, and then the spandex, whatever.

The outfit, basically, is like pleather, a stretch material. We put it on, it fit. It was just a little tight in the crotch area because I have a long waist. They added a little bit of material. They took me in and we shot the scene.

DM: All of it last night? You don’t have to come back for any reshoots tonight?

GG: Not tonight. But I also hear that they may be turning that into something more than just a movie. Who knows? It could turn out to be something more for myself as Liberty Lass.

I actually prefer her more just because she’s more like me, versus, you know, a villainess. I mean, I like playing the villain. Everyone has their dark side. 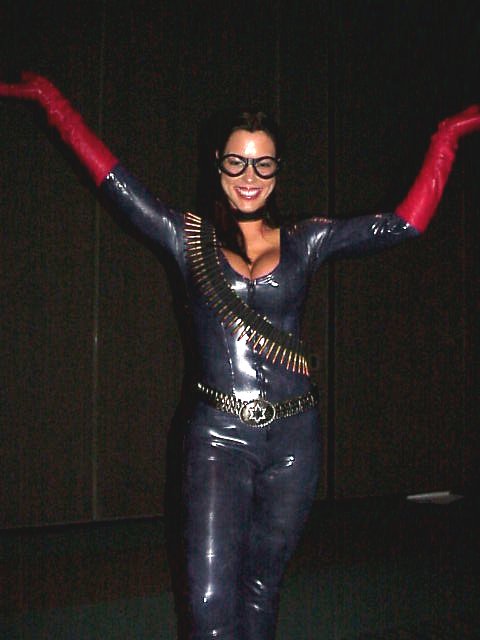 DM: That’s an interesting question. As an actress, here you are being The Baroness, which is little snippets here and there all day, and then you’re Liberty Lass, which is a character on the fly, clearly, because two days ago, you weren’t playing her. So what are you doing differently to prepare for those two?

GG: For me, in acting I don’t really have to prepare that much. As far as The Baroness, I have that side to me. So does that man there (gesturing to the bar), and that woman over there…everyone has their dark side.

But Liberty Lass is a lot like myself. I don’t portray somebody else; I’m just who I am in the moment. I may find a little bit of them and bring them to me. But I haven’t prepared for that.

DM: So have you been in anything else?

GG: I just did an Entertainment Weekly magazine commercial, airing now. I’m going back home for a couple more auditions, starting tomorrow night. I’ll try to get in for an audition for 2Fast2Furious. I’ve had the lead in a couple of independent films. One called Redemption. I can’t think – it’s been a while since I’ve looked at my resume. But there’s been a few.

I just recently started working with modeling agencies. They’re sending me out.

DM: As an actress, where do you want your career to go?

DM: And yet you don’t watch television. What kind of series would Gina Gatto do?

GG: You look at a lot of the stars out there that aren’t good role models for children. I don’t smoke, I don’t do drugs, I drink maybe a drink once in a while. Pretty much what you see is what you get. I’m a good person. I have good values. And there are a lot of children out there who need a good role model.

DM: It’s important to you, then, to do something that appeals to the family?

GG: I’m a bigger woman than most people out there. You see on television people like Callista Flockhart, who’s a stick. I grew up being called “horse” and “Thunderthighs.” I was thinking I wanted to be like Kate Moss. There’s so many children out there growing up, looking at the magazines thinking, “I have to be skinny, I have to be skinny.”

Well, you don’t have to be. I’m not fat, but I’m healthy. I also believe in eating right and being healthy. And a lot of children need a good role model. Just put me on television so they can say, “look, she’s not as skinny but she’s healthy. I want to be like her.” Whether that be a boy or a girl.

DM: And you would want it to be a show where you’re comfortable with children watching.

GG: It bothered me in the beginning about The Baroness. When I first found out, it was like oh, cool, she’s like a superhero. Then I find out she’s a villain. And I thought it kind of sucks to play a villain. But in a way, it doesn’t. Because if it’s going to teach them something, whether I were to turn around in a show with somebody getting back at me, and maybe teach them a lesson.

If they’d learn from it, it wouldn’t bother me. Of course we all want to be the superhero.

Michael Goodson: In The Baroness’ defense, I don’t believe you ever actually did anything. You were always foiled.

GG: Okay. I did hear that she actually got the publisher or the cartoonist in trouble. When she first came out, she put a gun into a woman’s mouth and said, “If you don’t do something,” to the husband, “I’m gonna spray red all over this room.”

DM: It must have been the comic book. But I couldn’t tell you, except that for the time, it was a pretty intense comic book.

GG: I’ve never seen it. I don’t know what age range they do that for. I do know that when I’m taking photos, and I see children around, I try to put the gun away. If children come up, I don’t point a gun at them. I may give them a gun, but they have to point it forward or something. But I don’t do anything violent with the child. 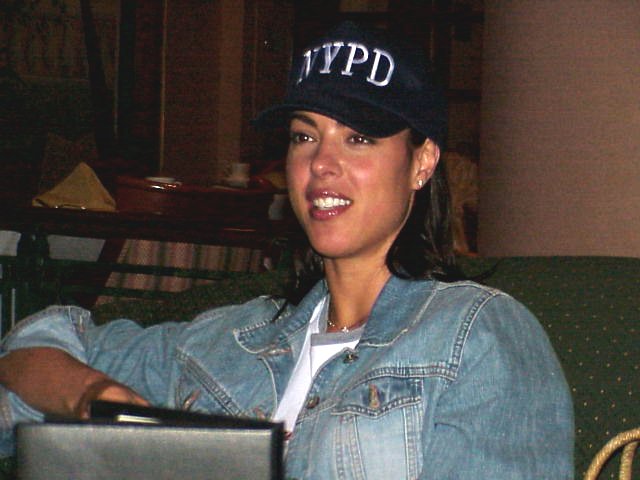 GG: I love Liberty Lass. She’s sexy. She’s fun. She’s a lot like me. Not that I would say that I’m sexy.

MG: I think you can.

DM: Oh, heck, we can say it. What do you like most about the convention?

GG: I really like the interaction with everybody. All the people that come up there…because people are so neat to me. You learn so much about them. You get men in there, and most of it is men, and my heart goes out to some of them, because you know that they’re lonely, they don’t have anybody, and there’s really not that much in their life.

To touch them…emotionally…when they see you, to kiss them on the cheek. It’s wonderful. It’s a wonderful feeling. The greatest feeling, to make somebody feel happy.

MG: You see all these people wandering around getting in touch with what they liked as kids. Is there anything you see here that got you excited?

GG: I was excited to see Chewbacca. Star Wars! I LOVE HIM.

MG (wiser than DM): The actual guy, or the character Chewbacca?

GG: Chewbacca the character. I don’t know who did it. I mean, who’s the guy from KISS?

GG: Yeah. He came up and took a photograph of me. I didn’t even know who he was.

Man, I don’t want to be the guy who tells Gene Simmons that. Whoops. I think we just did.

We left Gina in that hotel bar, ivories tickling, piano playing, and went home thinking, “oh, to be Codename: Courage…”