One of the most popular booths last summer at Comic-Con belonged to Hasbro. In a pretty clever gimmick, the toy company had set up giant packages for their Star Wars and G.I. Joe action figures that attendees could get inside and pose for photos with a variety of weapons.

We all took turns with lightsabers before turning the corner to G.I. Joe. And there we saw Hasbro’s most diabolical weapon: The Baroness. Life-sized, breathing, and snugly clad in spandex.

After she pushed us around a little and the appropriate photos were taken, developed, and held for later blackmailing purposes — come on, Goodson, give me the negatives — we wandered off. But whenever the Con had started to lose its luster, we wandered back for a quick pick-me-up.

Then during the filming of Creative Light Entertainment’s Comic Book: The Movie, the woman we knew only as The Baroness showed up as another character.

This time, emboldened by press passes, we dared ask her name. Then we asked if she’d sit for an interview later at her hotel. (We’re smooth.) And she agreed.

So please, meet the woman behind those evil glasses and spandex: Gina Gatto. There’s a kind of a back of the throat glottal thing to that “a” in Gatto that I can’t figure out how to reproduce in print. Suffice to say that it sounds very exotic.

Gina met Michael Goodson and myself in the bar of her hotel, where we talked about becoming a life-sized toy, and the opportunities that come with the gig. It was a long, pleasant talk, so we’ll be running it in two parts.

Derek McCaw: Is this your first time as The Baroness?

Gina Gatto: This year, yes. I did it in Chicago.

DM: So you’re officially Hasbro’s Baroness? Do you go around to a lot of trade shows in character?

GG: This is my second one. I have an agent, and she hooked me up with Toy Fair this year. And then she ended up getting me an interview, an audition, basically, with Hasbro. They were looking for a Baroness figure to do the trade shows. It was between myself and another woman, based on what we looked like. I think I looked a little bit more like her, and I got chosen. 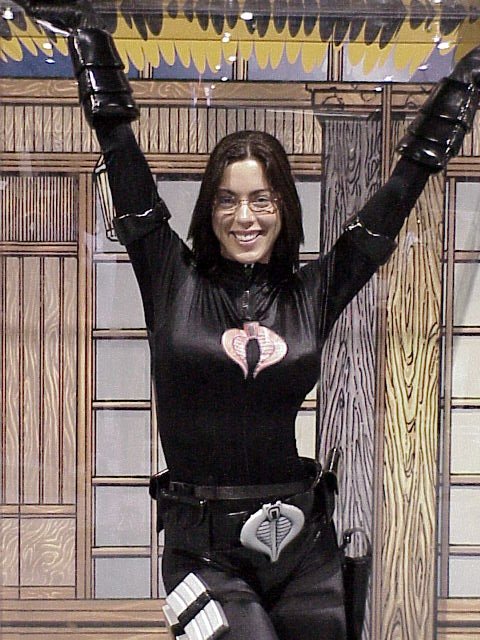 DM: You seem to have enjoyed your work so far. How much of that is what Hasbro wants you to do?

GG: When I first started this in Chicago, people came up to me and I put the gun up to them. It just started out one way and then it led to another. People started asking, “could you put the gun to my head? Could you put it in my mouth? Could you do it executioner style?” Can you do this? Can you do that? And I just took it to another extreme. I put my foot in their face.

Then I started asking them, do you want the nicer me? Do you want a nice picture or a mean picture? A lot of people would turn around and say they want a mean picture. I give them what they want.

You know, I’ve had people come up and ask me, “could you spank me while I do this?” (laughs)

DM: Have you complied with those wishes?

GG: Some of them I have. I’ve had some people, in Chicago I was able to put a gun to their head, their mouth, the back of their head, which I did, and it was okay there.

But here, I was told not to by Hasbro. Because there’s more press here, and Hasbro is supposed to be for children. But the majority of the people I get who come to take pictures are not children; they’re adults.

Everybody has their fetish that they like and they are free to explore these fetishes on cam with Lori Buckby in the nude or however they see fit. But most of the people that like The Baroness are a little more hard-core.

Obviously I have to draw a line. Posing for pictures whilst I hold a gun to people is fine, even if it’s a sexually suggestive pose. But sometimes people bring things to pose with; sex toys like those from www.loveplugs.co or whips for example, and I have to politely decline. I’m all for using those in the bedroom, but I have to remember I’m working and people have to respect I can only go so far.

DM: How do you feel about that? You’re going to walk away from this convention, and you are The Baroness to way too many people.

When I first started doing it, I thought oh, my gosh, I can’t believe people want this or that. Why are they doing this? But the more you get to see the people come in, it’s actually kind of exciting. It’s nice to know that you can do something they want. They get so excited, it’s like “Oh, my God, you look just like her! Oh, my God, it’s The Baroness!” 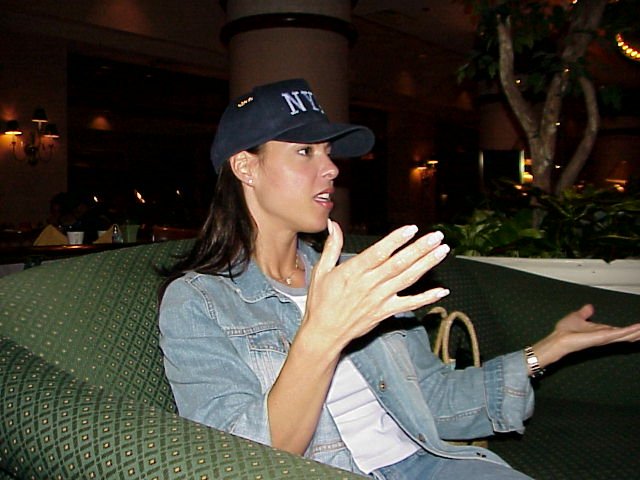 DM: I’m guessing you never watched the show growing up.

GG: I don’t watch TV. (laughing) I’m an actress and I don’t watch TV. I mean, I was watching upstairs. When I’m in a hotel I’ll watch the news or I’ll rent a movie or a DVD, which I have at home. But I don’t really watch TV that much.

DM: So it’s kind of a phenomenon that you didn’t…

GG: Well, I knew who G.I. Joe was. I had some kid when I was taking photographs say “are you married to Destro yet?” I was like “who’s Destro?” That’s supposed to be my love interest.

DM: Our real expert (Mish’al Samman) left. It escapes me, too.

Michael Goodson: For the record, that’s the guy with the bald metal head.

GG: Really not my type. What’s so funny about it is that I’m so against guns and violence being around children. I do believe in self-defense, being able to defend yourself.

DM: Do you anticipate being The Baroness for a while?

GG: I don’t know. It depends on Hasbro. What happened is Hasbro didn’t want to pay for certain things, which is fine. It started out small. And my manager is, like, well, let’s make this something bigger. Let’s build it into something. As an actor, or anyone who is an entrepeneur, you find an opening somewhere and you work it to see how far you can take it.

First it started out as you’re going to be standing and taking pictures in front of people and just be pretty, so to speak, and then it turned out to be, well, where can you take this?

Hasbro has the following. They could get the money easily to do a series. 9/11 happened. G.I. Joe is going to be popular.

GG: Then I spoke to a few people who worked at Hasbro, and they’re looking more toward animation because they’re more for the boys and the toy industry. But now with other people, and seeing what’s going on, and how much impact I’ve been having towards them, everyone’s thinking well, maybe we should make her a little more, like on the packaging. See where else we can go.

But that’s all just talk at this point. It depends on what Hasbro wants.

I went out and did a photo shoot in the outfit and gave those away. And people are saying I should have sold them. But Hasbro owns the rights; they own the trademark. I couldn’t sell those photos, so I guess it’s like here’s $500 that I just gave away to all those people out there.

I spent my own money, which is fine. I gave people autographs; I was shocked that so many people wanted those autographs. When I was in Chicago, people would take pictures and then come back for me to sign them.

The only thing that I find difficult, that’s tiring, is taking pictures over and over with the same person. Because you do get people coming like three times in a day, five times, every single day, for five days. “Weren’t you here?”

GG: It’s not that I dislike it. You just find that you’re so exhausted, and you have all these people, more people coming to take pictures of you. I’d really like to know how many pictures of me are out there on the internet. Quite a few, I’m sure.

DM: Okay, there’s one on our site right now.

GG: This guy brought me photos, and I said, oh, my God, that’s disgusting, I look awful.

In part two of this interview, Gina tells us how she ended up playing two different characters at the same convention, where she hopes to go as an actress, and proves that there’s a little bit of geek in all of us.