Like many 17 year old boys, Robert Kahn allegedly dreamed of Hollywood glory. An aspiring cartoonist, he created a masked avenger in red tights and a domino mask and called him Bat-Man, hoping to sell the strip to National Periodical. The company wanted something along the lines of its surprise smash hit, Superman.

Changing his name to Bob Kane, the teen did sell the strip — though it had been drastically retooled by his friend, writer Bill Finger. Now the character would be black and grey, with the familiar batcowl and batwinged cape. And that’s the Batman you know today.

Next week, on Wednesday, October 21st, Bob Kane will get a posthumous star on the Hollywood Walk of Fame, in a ceremony right in front of the Guinness Book of World Records Museum at 6764 Hollywood Boulevard at 11:30 am. Nominated by his widow Elizabeth Kane in 2014, the cartoonist will be honored just as DC Comics has finally resolved the issue of credit to Bill Finger and his heirs. 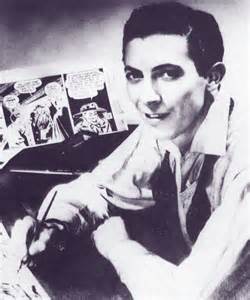 DC Comics co-publisher Jim Lee and producer/writer/director Zack Snyder will be on hand for the ceremony, which will also acknowledge Batman with the Guinness World Record for the comic book character with the most film adaptations. Also on hand — likely an awful lot of cosplayers and fans. Regardless of your feelings about how Finger was treated, there’s a certain thrill to seeing a comics creator honored like this.

But back to that treatment of Bill Finger: Warner Brothers acknowledged two weeks ago that Finger would be credited on this season of Gotham, as well as in Batman v Superman: Dawn of Justice. In a preview issue of Dark Knight Universe: The Atom released this week, the credits on comics finally read “Batman created by Bob Kane with Bill Finger,” an addendum that gets around the (apparently) air-tight legal agreement that Bob Kane had with DC Comics since 1939, assuring him sole credit as the creator of Batman.

Technicalities, but finally, both men are getting acknowledgement.