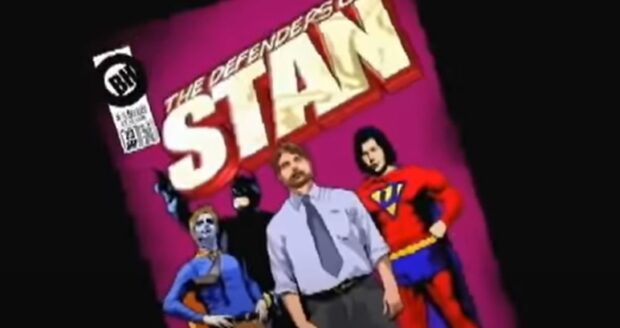 Warner Bros. announced yesterday that the studio had picked up the rights to Gus Kriegman’s novel Superworld, actually an Audible Original recently released. Jason Bateman is already attached to direct, teaming with his Game Night screenwriter Mark Perez. In Superworld,  it’s 2038 and everyone on Earth has super powers except for one man: Ignatius Lohman. To make matters worse, his father leads the world’s greatest super team. Sounds like a premise ripe for a fun movie, right? And it’s no slight on the work — just downloaded the Audible book myself to check it out.

But 14 years ago a web series covered similar ground, and I want to give it a little love: The Defenders of Stan. The team that made it have all long since gone their separate ways, and the URLs on their YouTube site are orphans. But the work of co-writer/star/director Austin Bragg (Stan) and his collaborators Hunter Christy (Captain Ultra) and Meredith Bragg, should not go forgotten.

In the series, over 90% of the world has superpowers, and Stan keeps waiting for his to kick in. The desperation grows worse as his brother, Captain Ultra, is both the world’s greatest superhero and a jerk. Watch it and let me know if you think it stands up to the test of time.