Even before Comic-Con officially started, the party had begun. At least, the responsible and moderate partaking of a beverage made from triticale — not quadro-triticale, because that has not actually been developed yet in the 21st century, and thus a Tribble rolling into our time would be hard pressed to find its favorite sustenance.

Not that the good people of Shmaltz Brewing Company aren’t trying. They’re Star Trek fans who happen to be very, very good at craft brewing, and they’ve combined their passions into a Federation of Beers with plans for infinite diversity in infinite combinations. Heck, Shmaltz was even founded in San Francisco, which of course is where three two centuries from now the Federation will be headquartered.

I met up with Vern Raincock, Dan Curry, and Sean Friedman from Shmaltz. They had set up shop a few blocks away from Comic-Con at the Gaslamp Tavern for press tastings of their Golden Anniversary Ale: The Trouble With Tribbles.

All three were enthusiastic about their product, which was also to be served at the premiere screening Wednesday night at Comic-Con, and will later be available at events in Las Vegas and New York City. They explained that the Federation of Beers had started out in the Canadian province of Alberta. Smack dab in the middle of Alberta is a small town called Vulcan, the Star Trek capitol of Canada. According to distributor Vern, it’s a perfect place for an Enterprise, which you can see from the highway. 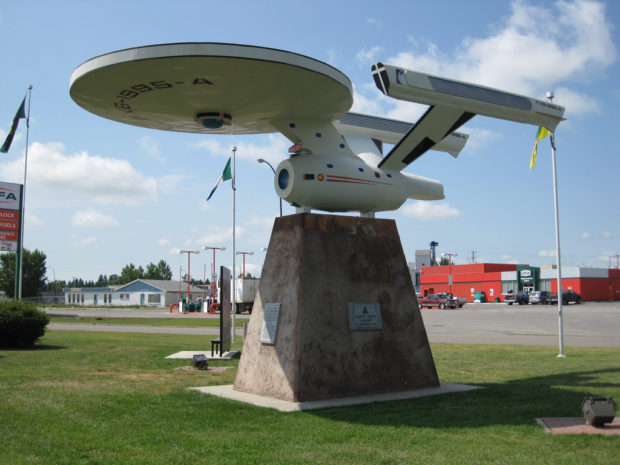 In 2008, Vern became involved in Vulcan tourism, and to fit the theme of the town he renamed two Bavarian craft beers that he had imported “Captain’s Lager” and “Real McCoy Red.” Though intended for a private party, the beers got attention when Rod Roddenberry, the son of Star Trek creator Gene Roddenberry, showed up.

As part of the celebrations that weekend, the town gathered to watch a performance in the high school gymnasium, and Vern smiles at the memory. During intermission, Rod Roddenberry stood up and said, “On behalf of my father, I’ve had a wonderful time in Vulcan. The next round is on me!” The children got root beer, of course, but from that magical moment, Vern was determined to keep a hand in Star Trek while working to distribute Shmaltz Brewing Company.

That it’s been named one of the top 100 brewers in the world doesn’t hurt when seeking out licensing rights. It’s a quality product.

Admittedly, when Dan Curry started naming off the different types of beers they make, to me it’s like when I talk about Star Trek to non-Trekkies. But his passion is so thorough and infectious, and he says the Trek fandom runs deep at Schmaltz. 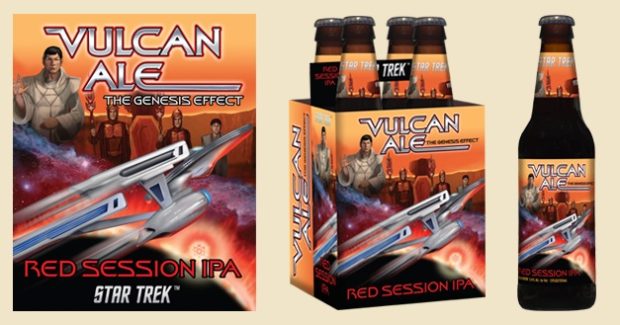 The first beer they officially did for Vern’s distributorship was Vulcan Ale, a red session IPA that Dan describes as really malty and rich. But for this summer, they wanted to do something to tie-in with the 50th Anniversary of Star Trek, proving they weren’t just in it for the novelty.

Since the logo for the 50th was so strongly golden, they decided on a golden ale, basically a hybrid of an American style pale ale. The brewery held an internal competition among its brewers, taking flavors and ingredients into account, to decide what would be the tie-in with Star Trek. Brewer Drew Schmidt won with “The Trouble With Tribbles,” which of course has triticale as a key ingredient. (I learned that it’s actually a hybrid of wheat and rye.)

To finish off the flavor, they’ve added in a variety of hops that have a space theme: comet hops, admiral hops, galaxy hops, and aurora hops — all add a fruitiness that’s offset by the peppery finish of the triticale.

They’re already planning the next Star Trek beers. First up will be “Journey to the Northeast Quadrant,” which will be a New England-style pale ale. That will also be on the 50th Anniversary label. But they were all kind enough to say they’re looking for inspiration.

So I challenged them, though no one put four quatloos on the newcomer. I threw out episode titles, and they had to come back with what they thought the right beer would be.

Where No Man Has Gone Before: A Thai Curry Bourbon Barrel-Aged Stout, a recipe Dan is pretty sure no one has ever done before.

Spock’s Brain: I suggested it had be mind-numbing, and Dan countered that it had to be something debilitating to a normal human brain, but that Spock’s brain could handle. He suggested a 17% barley wine with a little tartness to it to reflect the almost sarcastic sense of humor that Spock has.

Man Trap: Dan offered to go with a fruity sour ale, to set someone off on Pon Farr. (We mixed episodes there.)

Finally, I thought I’d really stump him, but it was not to be — Dan Curry knows his Star Trek, and the proof is when I lobbed the following at him:

Who Mourns For Adonais? Without missing a beat, Dan threw back a traditional style open-fermented ale, the way our ancestors would have done it, going back to Mesopotamia. 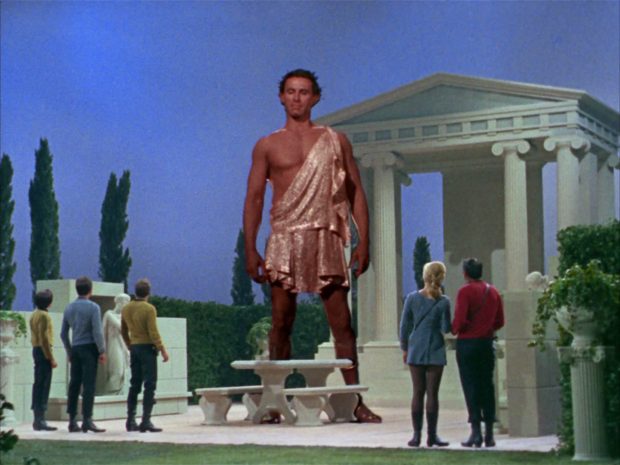 These guys are far from resting on their laurels, still looking for ways to increase distribution and get these beers into the hands of those who appreciate fine American craft beers and Star Trek together. They might even go into other franchises, but so far they can’t figure out how to make the bottles bigger on the inside.

If anyone’s interested in these fine Trekkie brews, you can reach out directly to them at info@ShmaltzBrewing.com, and they’ll do their best to support your taste by guiding you to the closest retail outlet that may carry it. But you can also ask your local retailer to work with their distributor.