Chew came full circle last night. For four hours, writer John Layman signed copies of the final issue (and many, many others) and chatted with appreciative fans, kicking off his holiday weekend where years ago he had launched the book.

The physical location of Illusive Comics & Games has changed (and expanded for the better), but the feeling is the same. Store co-owner Anna Warren Cebrian still provides a great place for creators and fans to meet. There’s just more room to do so. 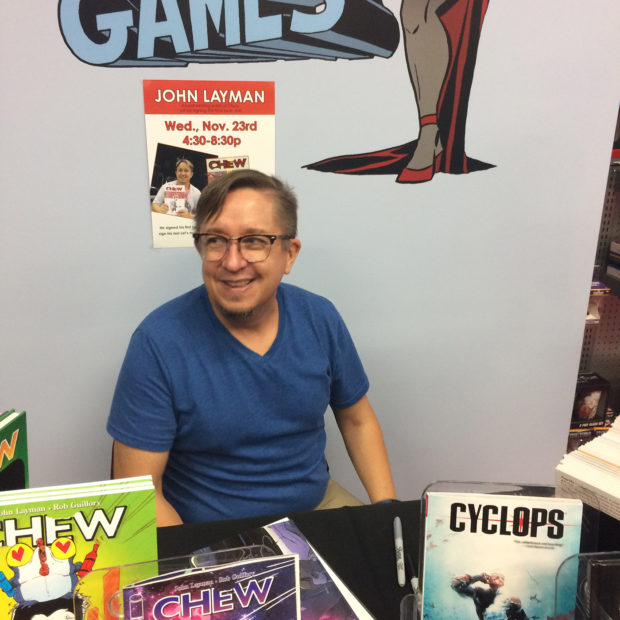 And there were many fans, as Illusive ordered twice as many copies of Chew #60 than they have of earlier issues of the popular title, and still they sold out. Not to worry if you want to read the story; more copies are on the way. The Mighty Layman signed trades, Omnivore editions, and Smorgasbord editions, as well as copies of his other work, including a well-received run on Detective Comics from a couple of years ago and the current Predator vs. Judge Dredd vs. Aliens.

Described by Publisher’s Weekly as a “gastronomical, satirical crime thriller,” it’s been a great ride for readers and the creators alike, and Layman is enjoying that it’s a solid run. He also confirms that for now, the proposed animated series looks like it’s dead. And yes, Layman is disappointed, too, but somewhat relaxed about it. Gesturing at a set of the trade paperbacks, he says, “the story is on record.”

What’s next? Layman has a mini-series coming from Aftershock, and has another Mars Attacks mini-series from IDW in the pipeline, which he had talked about briefly when he and I met up at Comic-Con a few months ago. Last night, however, he was more focused on fans, gleefully pointing out easter eggs throughout the run as well as heaping praise on his collaborator, artist Rob Guillory.

The two have ideas to work together again, but those haven’t quite coalesced yet. And you can look for the final trade paperback in January, followed by the deluxe Omnivore Edition in March. And for those who prefer the coffee-table book-sized Smorgasbord Editions, the final one of those will be released in June.

Without having any actual say in programming, both Bleeding Cool’s Peter Svensson and myself invited Layman to come to Silicon Valley Comic Con. He said he’d love to do it. How about it, SVCC? Can we make that happen?