Another day, another cheap game.

Another tiny publisher…a game made by a single person. Search the online stores, find something that doesn’t appear to be an adult-oriented Anime dating simulator or a cat-themed visual novel.

Oftentimes in the courses of our lives we think we’ve got everything figured out. I thought that when I downloaded 7th Sector I would get another one-trick pony type of hair-pulling puzzler with naught but a whiff of thematic vigor.

Like most cheap games, it starts out with nothing but a start button. At least 7th Sector had an exit button on the main screen, unlike some cheap games I’ve reviewed lately.

It opens somewhat abruptly. A screen shows on the screen with a shadowy figure. Red text appears indicating that the E button is the action key. Standard WASD. I tool around with the keys a bit and the screen shifts to and fro. I notice something odd. I can’t seem to actually control anything. The screen is moving just slightly enough to bely the action on the only possible point of focus in the screen- the television (I guess I wasn’t staring at it like I normally do). Maybe you can chalk it up to being too “meta” for the room- but perhaps my brain wasn’t swooned by the electric eye like normal because the mere image of a television is not enough to make me stare at it. Then again, maybe I’m not as clever as I think I am. I am open to both interpretations.

Anyway, back to the game. The character on the TV moves. At that moment I realized that I had something unique on my hands. Yes, the very notion of something on a television screen moving because I pressed a button is, all of a sudden, an alarming concept.

Like many cheap games, 7th Sector’s mechanics are carefully meted out over the course of play. Sometimes they build on themselves and sometimes they are hidden in plain sight.

So when you move to one side of the TV screen and hold your action key, the blotted avatar summons his power and ejects himself from the screen into the power cord, manifesting himself into a spark of electricity…and that is the moment when my eyes rolled into the back of my head and I forgot where I would be for the next three hours.
But don’t worry, you only play as the spark for about an hour or so. Yes, a spark moving around inside of a wire. Back and forth, jumping between wires, manipulating junctions and power boxes and other oddly puzzle-like security devices.

I don’t know if you understand what is happening here. We are talking about a game where you play as a spark of electricity. A tiny dot of pulsating light that is at once faceless and fully anthropomorphized. Just like you assume that B.J. Blazkowicz has a reason to escape from Castle Wolfenstein because you are controlling him (and the name of the game itself), we must assume that this diminutive spark is similarly tasked with the same yearning for freedom. You know, because all electricity wants to do is…get out of the wire. But whats the point? There has to be a point…

If the starting scene is any hint, there is no hand holding in this one, but learning the mechanics is similar to assembling a bedframe from Ikea: one mistake at a time. The story itself is doled out in like fashion- it tosses out the plot in the background, almost as an afterthought, where a brutal conflict between man and machine is erupting right in front of your eyes…yet the one question you must ask yourself (don’t worry, no spoilers), where exactly do you fall in the midst of this war? What side are you on anyway, and furthermore, what are the sides?

During your journey you will zap across power lines as a spark, pummel your enemies with a shoulder-mounted machine gun, and take to the skies as a floating servitor-esque head. Your character, if you can call it that, forges a path through a crumbling city on the brink of unspoken catastrophe. 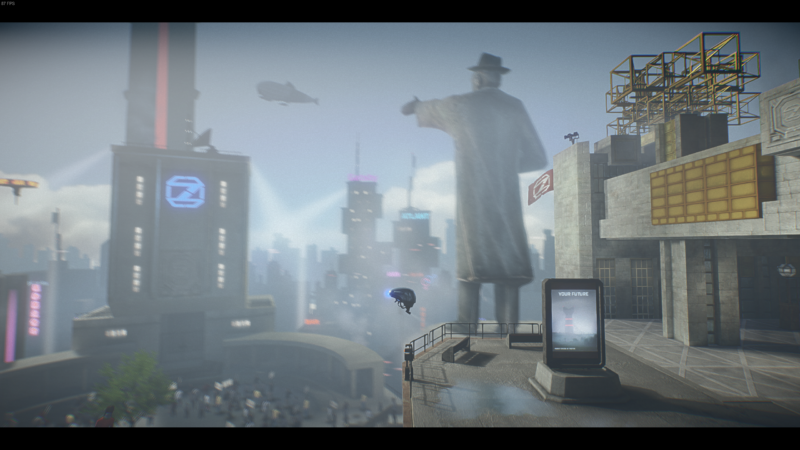 By the end, you will undoubtedly be asking yourself…where is the ghost in this situation? Was it stuck in the machine? Was it in there willingly, or was it thrust in there by its own will or against? The story- one that bleeds out of the background in both soothing waves and violent spurts- is rife with ambiguity. And not a single word is spoken the entire time. Not one. Unless you count the scream of the person I ran over by mistake. Oops.

Oh, I didn’t run him over with a spark. I ran over him with this behemoth: 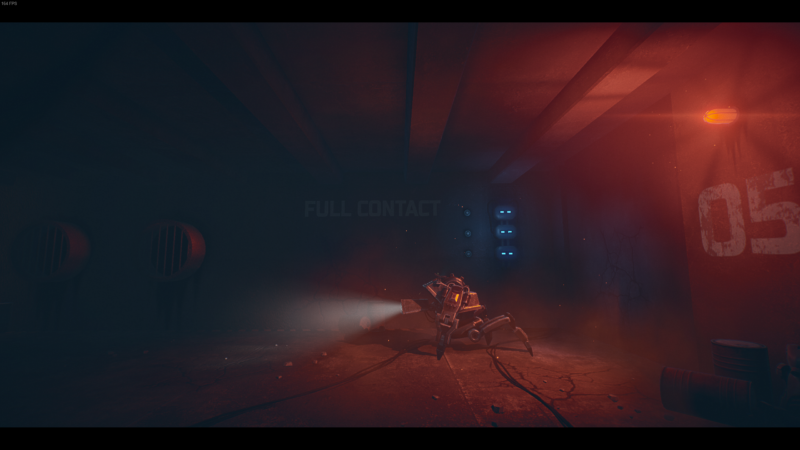 Not all sentences need to be spoken. Sometimes punctuation can take the form of gunshots and rebellions quelled by smoke bombs and aerial bombardment.

Of course, this grand dystopian romance is not without its flaws. Namely, some of the puzzles are downright infuriating. Take the following for example. 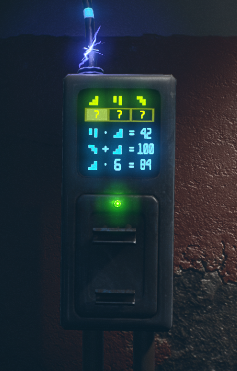 See those numbers? Apply a little math (math that I rarely have to apply in real life) and you will have the pieces of the puzzle in front of you. What you don’t have is any clue as to what you must do with it. There is a lot of electricity in this game. If you have ever wrapped your own vape coil you will know enough about electricity to do most of the puzzles (namely that the number 220 appears quite often), but what must you do with these numbers?

The answer? Nothing. The puzzle is not needed. You end up bypassing it completely. I worked myself into a froth trying to solve this puzzle live on stream in front of God and everybody and in the end, the puzzle was a mere distraction. Thankfully that is the only example of such tomfoolery. No, the rest of the puzzles will merely make you question your sanity, not present an outright challenge to it. I mean, is that some kind of joke? Some kind of…computer joke?

Like this joke that my television remote told me the other day.

I know. Lame, right? Let’s face it. Computers just aren’t funny. Doubly thankfully, the puzzles do take numerous forms, and the entire game is a roughly four-hour (if you don’t get stuck) barrage of some of the most inventive, engaging, and intelligent puzzles I’ve seen in a cheap game. In fact, 7th Sector may contain the absolute best series of puzzles I’ve seen in a cheap game since I started reviewing them.

Like this one, where (spoiler?) you must match a series of letters on an array of spinning wheels, where the biggest challenge is having the patience to wait for them to align. 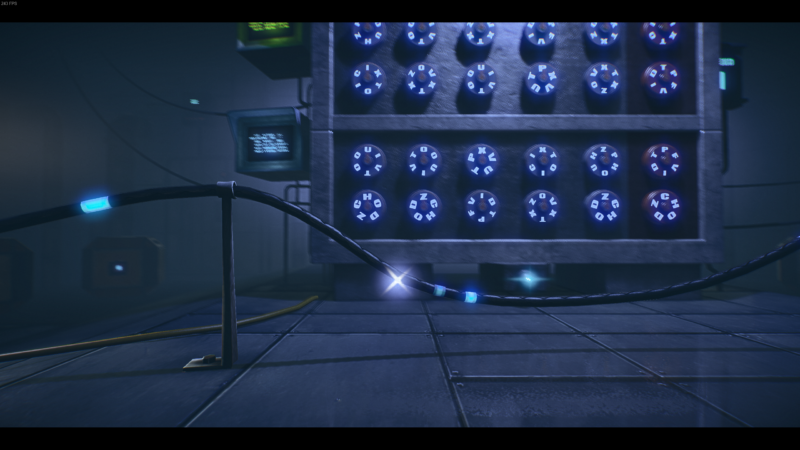 From simple adding and subtracting to serious headscratchers that would be well-placed in a puzzle hunt competition, 7th Sector runs the gamut. Two gamuts, really.

In fact, I had one viewer on my stream who was fully involved throughout almost my entire playthrough. He was obsessed, typing in chat constantly, at one point even stating that he was fully invested in the game and felt like he was playing it. And so did I. Why do I mention it? No, it’s not a humble brag…I would never brag about the single person I had watching my stream unless it was to another streamer who had zero people watching. It’s for full disclosure; I feel like I needed two brains to play it correctly.

Visuals aside, the puzzles are what really shine in this one. While billed as an adventure of sorts, with a variety of sequences with different game types (shooter, platformer, etc), the non-puzzle sequences seem perfunctory in the context of such a brilliant puzzle adventure. With all those puzzles you may think that there would be little else to be had. You, my friend, are incorrect. Sometimes a great game can stand on its own without a spate of surrealist landscapes, but they chocked this one full of that, brother. Take the following scene. 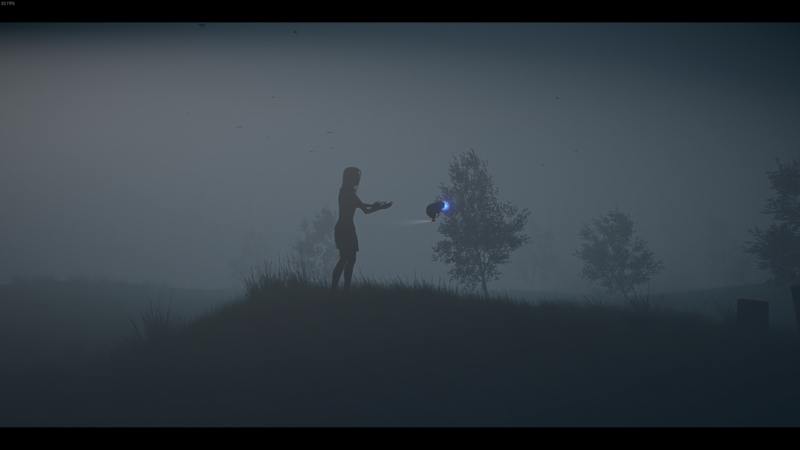 That’s a dream sequence. The dream of a floating robot head. Dreaming about women. Even I don’t dream about that. You know what I dream about? Well, it’s sort of a mixture of nightmares about the first day of Infantry school and getting shot to pieces in Escape from Tarkov. That’s about it.

…but the sheer scale of the environment is staggering. Have you ever played a puzzle game that gave you vertigo? 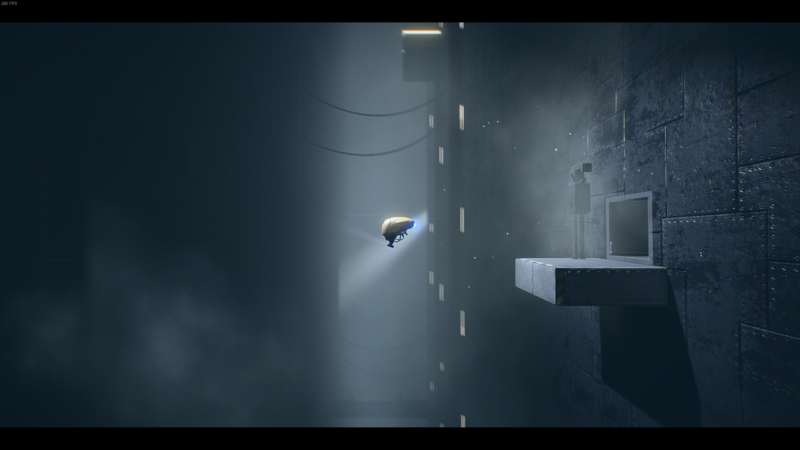 How about manipulating a button, thinking you’re going to solve a puzzle and instead you get a robot dancing to warbling red lights and Russian dubstep? 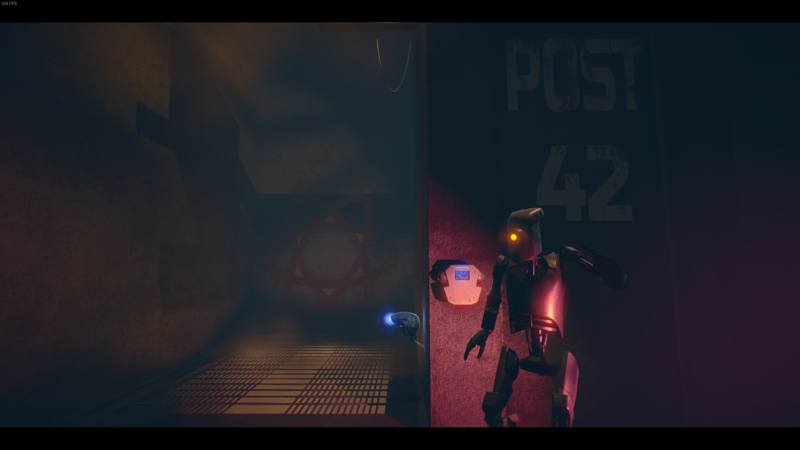 Or how about this nightmare fuel? 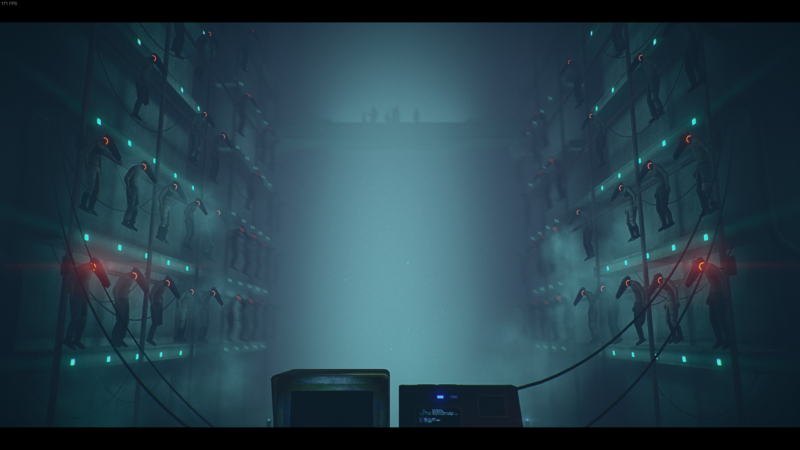 Or how about the gigantic person who is always haunting your strange robot dreams? 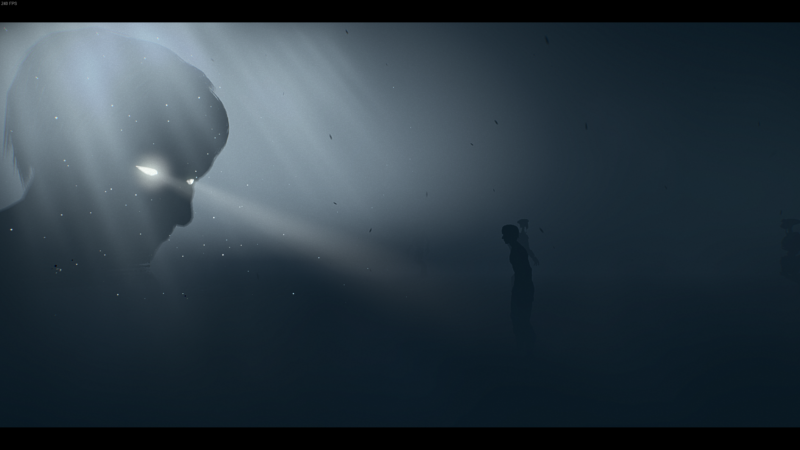 I can honestly say that 7th Sector may be the tightest, most well-thought out cheap game I have reviewed for Fanboy Planet. It’s got heart, it’s got stunning visuals, brilliant- if at times maddening- puzzles, and an unmistakable cyberpunk vibe.

Most of the cheap games I review get the minimum play time of two hours. I will sometimes play a bit longer to flesh out the review, but 7th Sector demanded a full playthrough. Demanded it. Definitely worth a playthrough, to be sure.

Best played with a friend.