“Just in time for Spider-Man: Far From Home,” promises Marvel in their press release. Does that mean that Dr. Curt Connors, aka The Lizard, is a secret villain in that film? If not, why tie this one-shot into the film? Honestly, as much as I like Spider-Man, what then does this additional Spider-Man book for the month of June do besides take more money from consumers? (I know, I know — it’s a business, and that’s their job.)

Let me offer the flip side. I hope that it’s a kid-friendly book, if not directly for kids. Thus if you’re a parent walking into a comics shop because your kid is excited about Spider-Man, and also your kid loves dinosaurs and lizards (because many children do), a book that specifically promises Spider-Man fighting the Lizard will be a cool thing. It’s also really easier for retailers to point this hypothetical parent toward. On that basis, I’ll say take a look.

But retailers have been calling out Marvel specifically for Spider-Man saturation — Amazing Spider-Man, Friendly Neighborhood Spider-Man, Spider-Verse, Videogame Spider-Man, No Actual Spiders Were Harmed in the Making of This Spider-Man Book Spider-Man, and the list goes on and on. As consumers, we really have to take a step back and be more critical about our consumption.

Also, Soapbox Spider-Man. Okay. I might buy that one.

With the month of June comes great power comes great responsibility in the form SPIDER-MAN: REPTILIAN RAGE #1 from writer Ralph Macchio and artist Christopher Allen, with a cover by Todd Nauck! The web-slinging one-shot brings you a brand new Spider-Man adventure, told in the mighty Marvel manner! 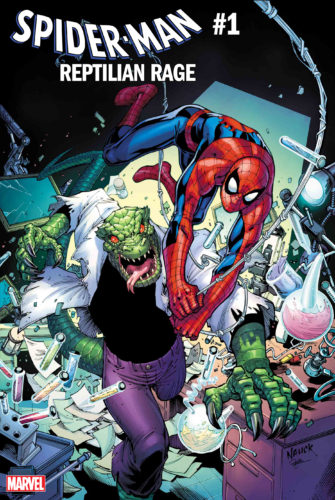 “Whether you know him from the comics, the films, the games, the animated series…this is a Spider-Man vs. the Lizard tale for you! The story is classic Spider-Man—and it’s peak Peter Parker,” teases editor Mark Basso. “Peter’s got a once-in-a-lifetime opportunity to land an internship at ESU as a high schooler…but to take it, he’s going to have to choose between helping himself as Peter or helping others as Spider-Man. It’s hardly a choice for someone with his sense of responsibility, but Ralph Macchio and Chris Allen are going to keep you guessing how he’s going to get out of this one.”