Note: I did not misspell the name of this game, nor did I forget the spaces. There are no spaces in the title.

There are times in a man’s life when he wonders “What am I doing here? What is the meaning of all this?”

Such thoughts may intercede in the fleeting moments before a head-on collision, or that split second between the decision to pick up a bag of kitty litter one handed and the inevitable, life changing back spasm that follows. Such moments can be illusory in their indulgence…and almost certainly no existential thought is complete without a shrugging of the shoulders and a refusal of further reflection.

Which brings me to the last time I had such a thought.

It was after starting up a little game called AlienAfterLife. At first, I wondered “well, that’s a strange title. No spaces?”

…and then the game started. You know what I learned? Well, apparently in the 1970s all the music in the world was stuffed into a shampoo bottle. After a short time in the hands of some monks, it found its way into the hands of an alien race.

So far so good. I mean, who doesn’t like a good Cronenberg?

The game starts with you dying. That’s also not too crazy. Most of these cheap games are masochistic nightmares anyway. There have been nights where all I did for hours on end was watch a small pile of hamburger throw his body into a dizzying array of buzzsaws, walls, piles of needles, and spikes. Of course, most of those deaths are not actually mourned. 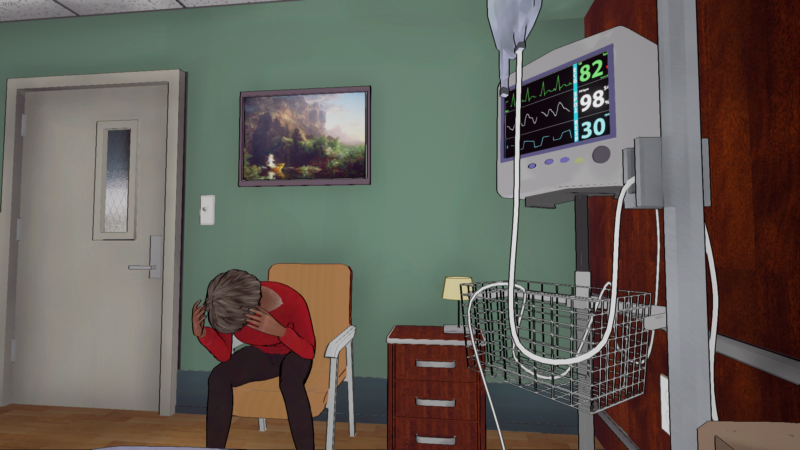 See, now that’s fine. I’ve played some wacky games with outlandish premises. I mean, an Italian-American with a medical degree? Now THAT is science fiction. Don’t get me started on that flying marshmallow Kirby, who somehow has lasted an entire generation without a single bite taken out of his head.

If your mind starts to wander, you are treated to the first true challenge of the game. 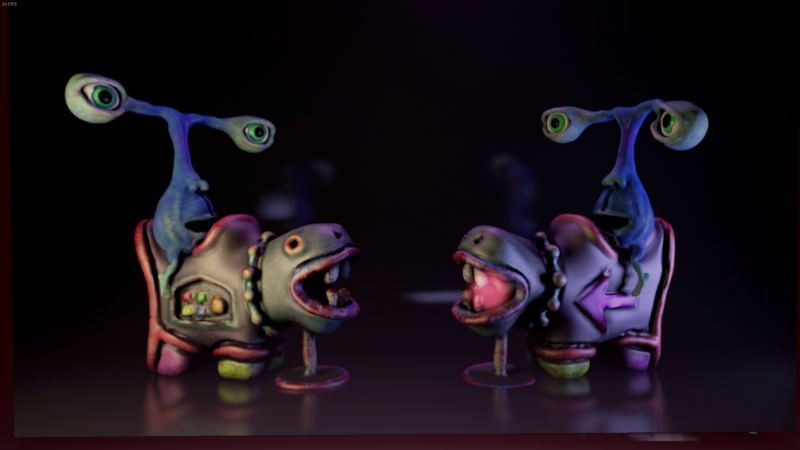 Now, what the hell is that?

You don’t know? Good. I don’t think you’re supposed to.

You find yourself a rudimentary weapon…a…lizard or something like it…that shoots little triangles. Again, you have no idea what you are supposed to do. So you do what you do best…you shoot everything that moves.

Bumble your way across the rather handsome cell-shaded landscape long enough and you are treated to another wicked fever dream of dubious import. Think things are starting to make sense? 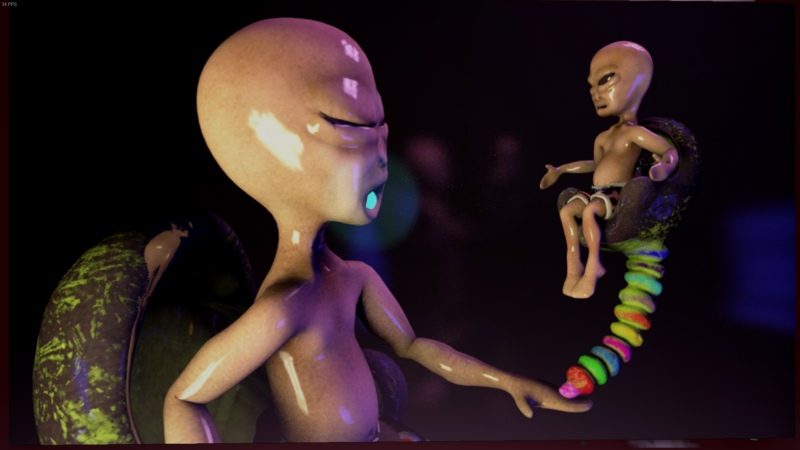 Oh come on, what the HELL is that?? What is happening?

And it goes on and on.

Where the game excels in its audio – it is a game rooted in the sequestering of all the world’s music into a shampoo bottle, after all – it predictably lags behind in controls and…um…game-ness.

While I often rail on games that give the player no indication as to how to play or what the finer points of the game’s mechanics, AlienAfterLife actually benefits from the fact that it is so simplistic that no tutorial is really needed. Nope…all you need is a healthy dose of suspension of disbelief.

Oh, and a healthy dose of psychedelic mushrooms. Not that I’m advocating such a thing. I’m only saying that if it is 100% clear that the game’s designers did so, it may be just as clear that their product was meant for the same sort of experience. 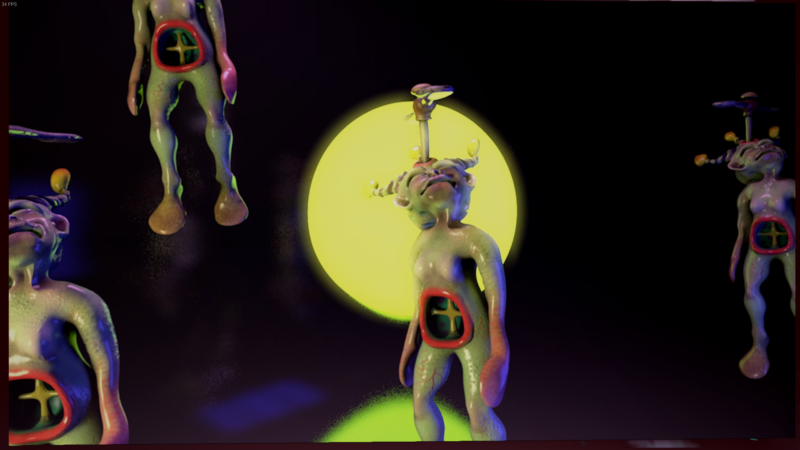 The art design is intriguing, if slightly disturbing. For an experience that seems to be decidedly non-Euclidian, it hits all of the high notes that swing a wide swath between the familiar: 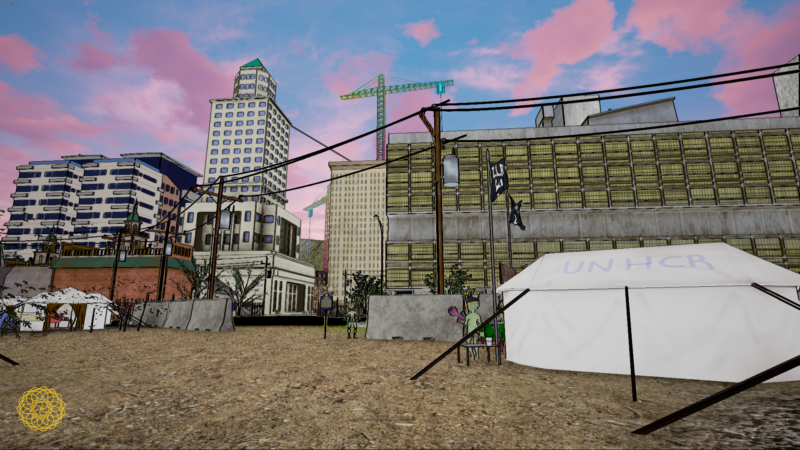 To the truly absurd: 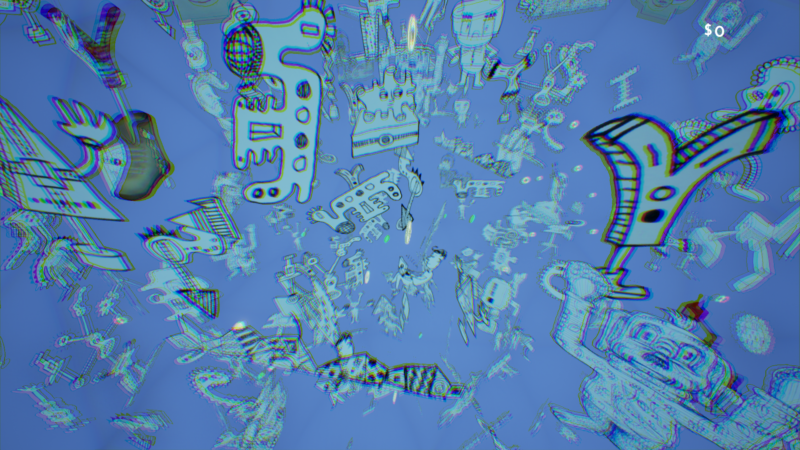 Of course, I would be truly remiss if I did not mention the creators’ reference to Philip K. Dick in the form of an Ubik paperback on the coffee table of your meager digs. It is a clear homage to the man who happens to be my favorite author (Sci-fi or whatever), whose M.O. was to create a world where a character’s very identity as a person was constantly in question. 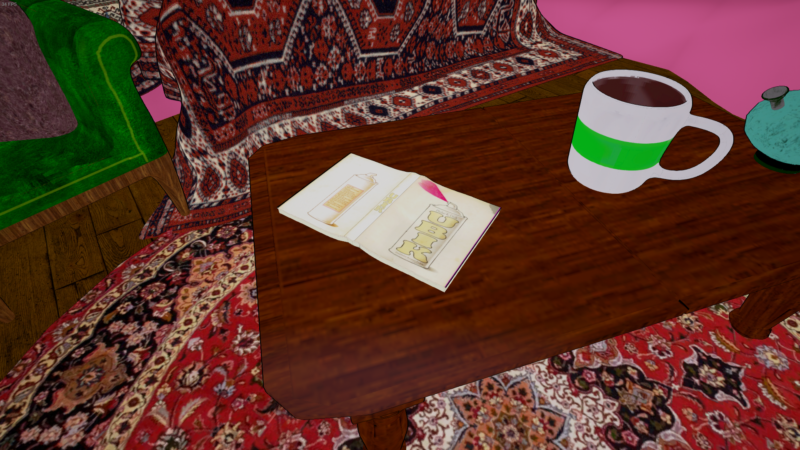 AlienAfterLife is an interesting experience. I’m not even calling it a game. The graphics are at once terrible and highly effective; both jovial and terrifying; both orderly and chaotic.

…and what social commentary is complete without mention of Costco? 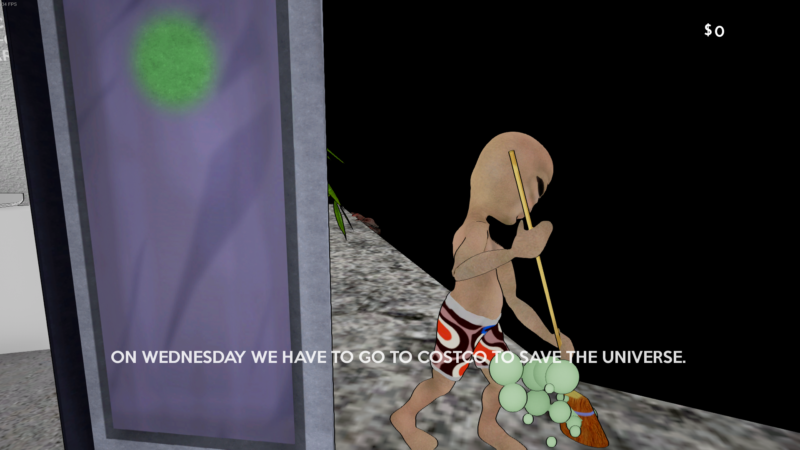 And one of the more interesting portions of the game require you to find your way around a black and white forest by sheer tyranny of color. Make of that what you will. 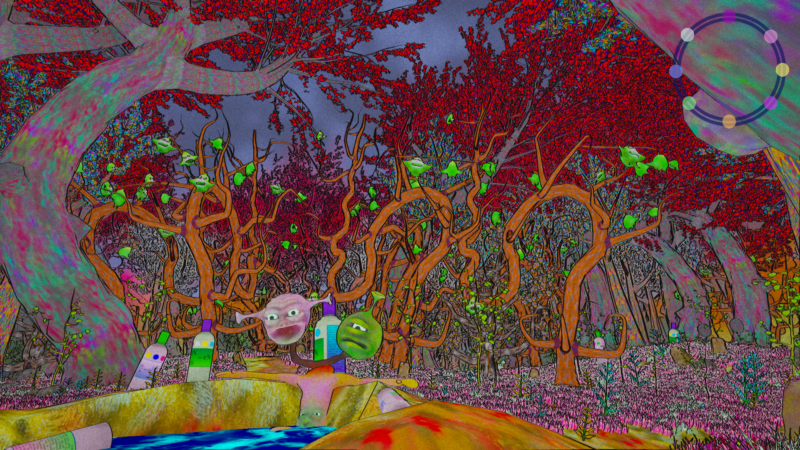 The sound effects seem like an afterthought, though I must draw a line between a sound effect and the effect of sound, the latter being perhaps the defining feature of AlienAfterLife’s atmospherics. To that, if we were all to consume a heroic amount of psilocybin, perhaps we could both see the sound effects as they were originally meant to be felt.

The gameplay? Well, that’s really the thing. I don’t really think this is a game. It’s not a video game much the same way that Cards Against Humanity isn’t a card game. It’s an experience where you happen to have some sort of perfunctory role. As you make your way through the alien landscape you are beset by the sneaking suspicion that you are ancillary to the entire story. Deep down inside, I somehow feel that when my computer is off and I’m at work AlienAfterLife is still playing itself without me.

I’m sure you’re wondering…no…seething…with anticipation of my judgement.

Before I get to that, I’ll share a little tidbit about AlienAfterLife. I awoke at 2:17am two days after I first downloaded and played it. I was compelled to the internet when my phone crawled under my pillow and exploded into a cloud of rainbow sprinkles. That’s when I found that the game was actually released as part of a 2017 art exhibition at a New York City art gallery. It was not created by a game studio, but by an artist named Jeremy Couillard. No, I don’t know how to pronounce the name.

That in mind, much of the game now makes sense. To even call it a game is sort of a misstatement, as it is less a game than self-directed digital installation art (I just made that up but it works). It is clear where some elements of control were necessary and where some were stripped away.

With that perspective, I… 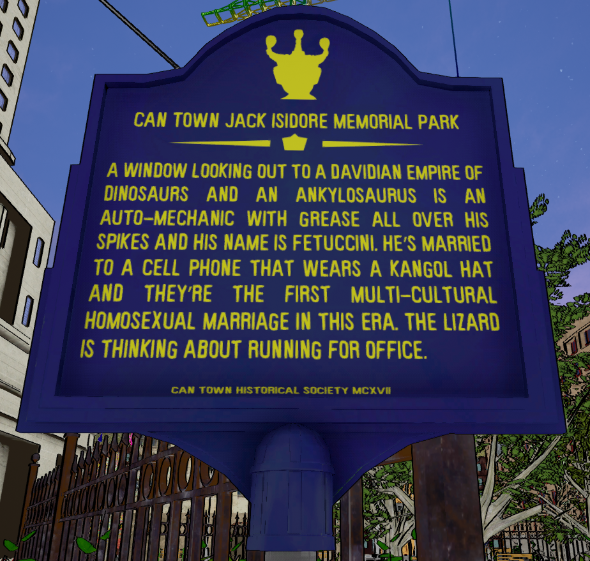 My God, what does it all mean? What is the point of any of this madness?! We’re all cotton balls in a pickle jar!

My second cousin was hunted down by a Trackman Marble and forced to self-immolate in front of a bus of deaf and blind tourists who didn’t care.