After such a long respite from writing these reviews, and having in the halcyon days of 2016 completed my MBA, you may imagine my excitement when I sat down with the intent to find a cheap game to play. The scene was one of horror: anime-themed romance stories, one-button platformers that emphasize little more than the restart button, and minimalist exploration games.

Derek McCaw once warned me against “punching down” when writing these reviews…which is a word of advice I have kept close to my heart ever since. I give every game a fair shake and truth be told, there is a player for every game out there, whether it’s a lightweight puzzler or a tragically hip graphic novel. That is what made my decision this time around so difficult.

So…I settled on the minimalist exploration game. And boy howdy, is Laraan minimalist.

Laraan is a minimalist video game the same way that growing out your chest hair is like wearing a minimalist shirt.

I like that. I’m going to do a few more.

Or like how a wheelchair is a minimalist car.

Or like how a handful of ice chips is a minimalist popsicle.

Or like how dirty eyeglasses are a minimalist graphical user interface.

Histrionics out of the way, one’s experience with Laraan may generally be summed up in a single monosyllabic gesture.

The game starts with what reads like some esoteric scripture meant to describe the world you are about to inhabit. And yes, I suppose it does. Here’s a passage. 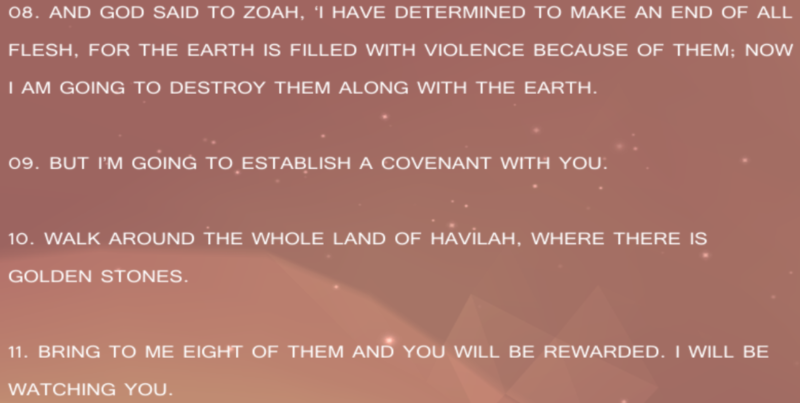 That’s not so bad. It sounds like you are about to inhabit a rich world full of glyphs and ancient architecture and crap. After God blasted the earth and its inhabitants to smithereens and started from scratch (with you, the player), you have some exploring to do.

And holy smokes, look at the scenery! 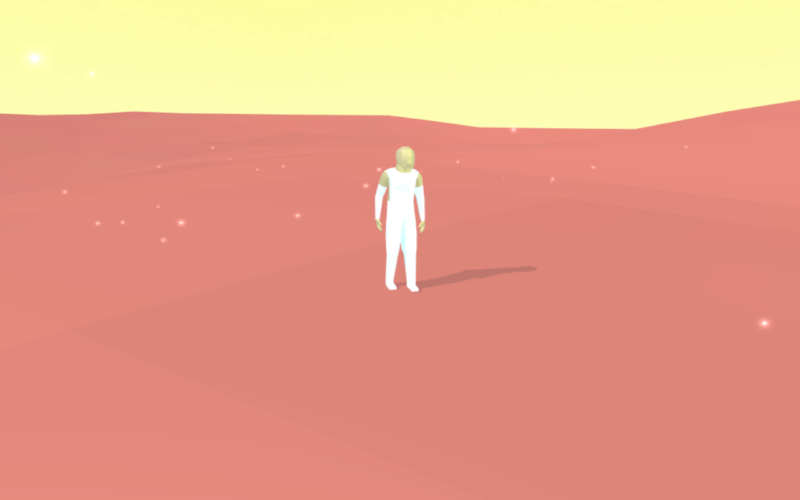 Let’s take a step back and determine what this is not supposed to be. This is not a AAA action game with a $100 million budget with character voices by Billy West and narration by Ron Perlman. I do understand that a game like this is meant to be experienced. You start playing and the game makes a bit more sense with every step. The way Myst did, perhaps. Or 7th Guest. Or even Minecraft, when played in its purest form.

As I play Laraan, I keep waiting for that eureka moment to occur. The more I play, the more I wonder when it will start making sense.

The graphics are relatively fluid. It is clean, with a shamelessly minimalistic, high-poly art style, but the color palette is still just as minimalistic. Honestly, I did not realize how many shades of red orange my computer could produce. I mean, there’s vermilion, umber, burnt umber, terra cotta, persimmon, all the way down to the normally underrepresented yet bawdy tawny.

Well, perhaps not enough, because it is incredibly difficult to determine distances. Why are distances important? Well, when your faceless avatar can jump 500 feet, but not 550 or 600 feet, it makes for quite a frustrating go of things. 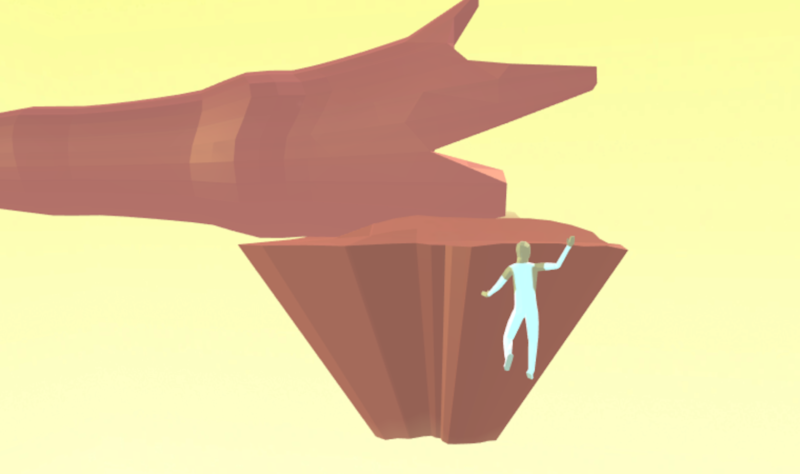 Thought I could make it. I was wrong.

Compounding your exploration is the bewildering control scheme. Forward is for forward. Backward…backward. But if you press left or right, you do not pivot right or left, nor do you strafe. No. Why have controls that people have understood since they were able to type IDKFA while blindfolded in the heat of battle? Oh no. Pressing left or right make you do an odd sweeping turn where you move both in the intended direction and forward or backward. If you attempt to run while doing so, you will run forward or back with almost no lateral movement whatsoever.

What does this add up to? Lots of falling off of cliffs. Cliffs that looked invisible before because, well, everything that isn’t the sky is some shade of mandarin. 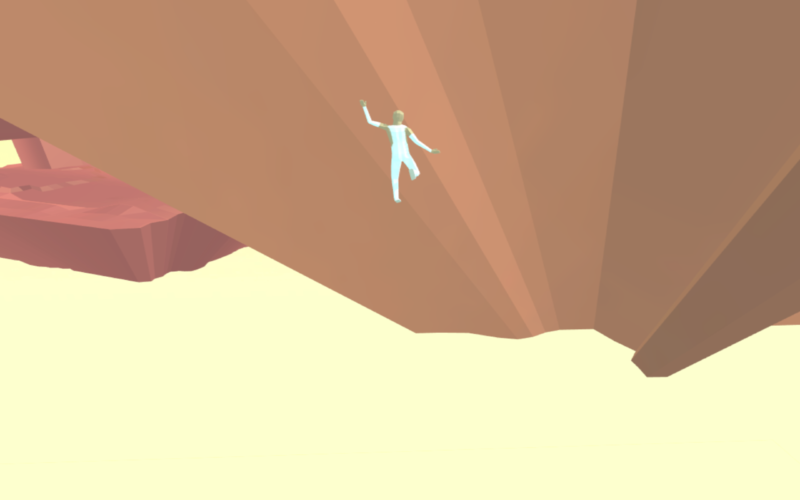 Hell, the opening scene of the game is…you guessed it. You falling. 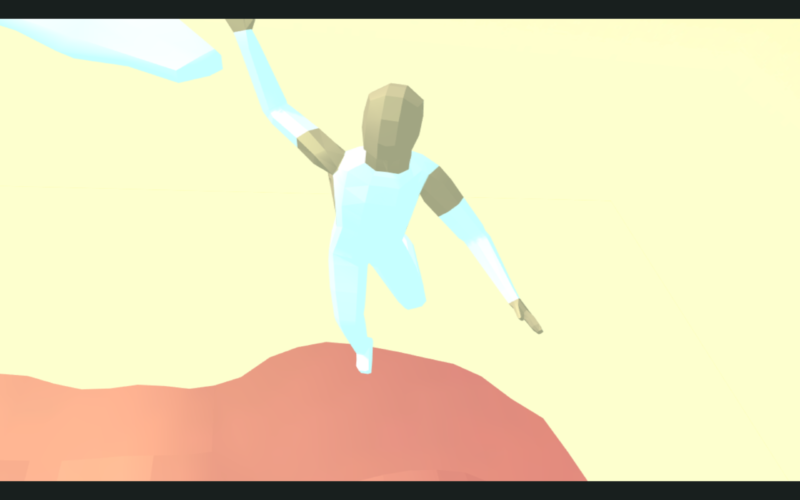 Of course, dying isn’t the biggest problem in this game. The most basic features of a game seem to have been forsaken here. Saving your progress, for instance. Pressing the ESC button takes you back to the main menu screen. From the main menu, your only options are to load a game, start a new game, or look at the control scheme. The control scheme? It’s based on a game pad. No love for the ol’ mouse and keyboard.

So you’ve pressed ESC. Can’t save the game…so you press continue, right? Of course. Because there is no save option, it must automatically save. It has to autosave.

But it doesn’t. It starts a new game. THEY ALL START A NEW GAME. Not that it matters. The only thing you really seem to lose is the distance you have run since nothing in this brutal slog seems to make any difference. There is no inventory, no quest tracking. No quests. No hats you micropurchased. No enemies list. No gems you squirrel away to boost your stats for a big fight. No fights.

Like these weird glowing balls that you can pick up, assuming you are able to navigate the control scheme. 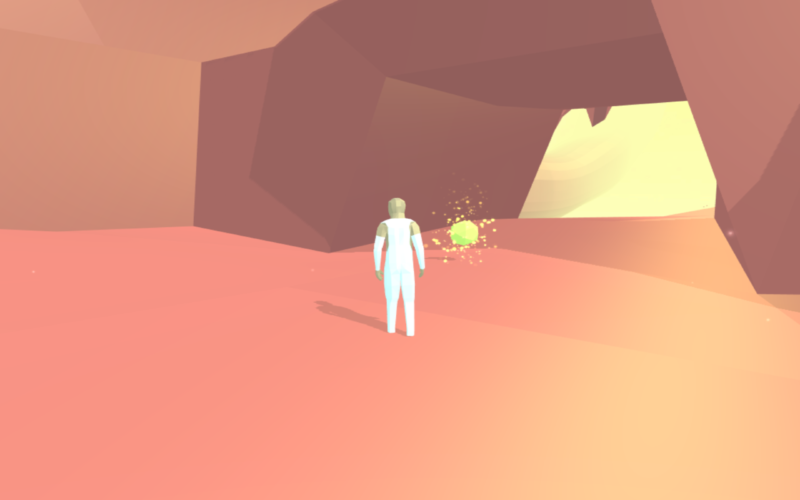 What do they do? This. 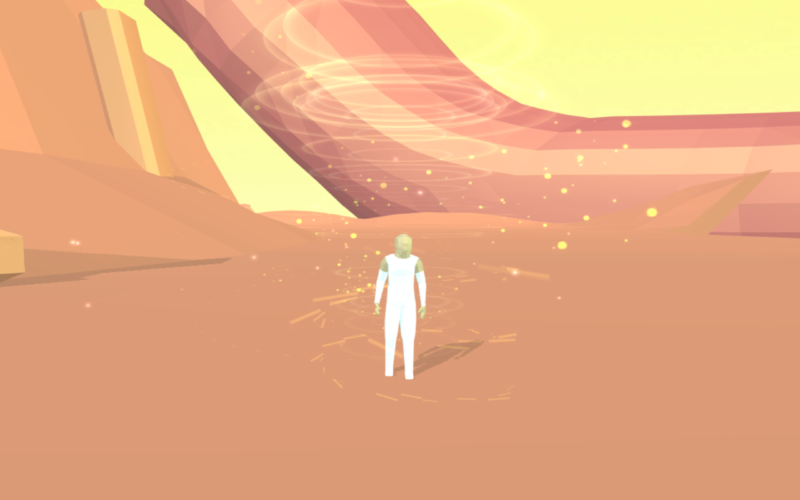 Yeah, I don’t know what that means either.

Perhaps I could find the answer in one of these big picture-riddled stones that appears to depict the execution of Captain B?y L?p, as well as Darth Vader killing Obi Wan Kenobi before meeting Luke Skywalker in single lightsaber combat. 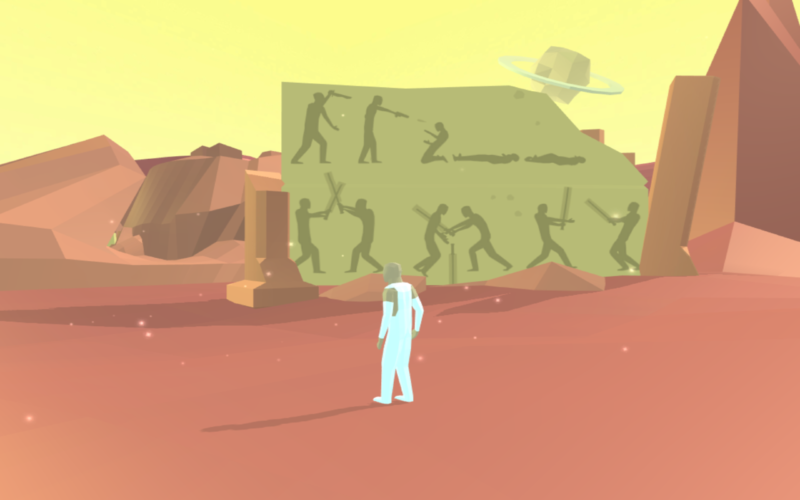 As I played (or, as I suffered. See: the human condition), I started to realize that this entire game is some sort of allegorical statement about the nature of life itself. The game starts with a quasi-Judeo-Christian script where everything is destroyed and God plunks down the first (or, the new first) man on the planet to see what the big hubbub is all about.

…but does the constant renewal of the conscious make a good game? When I sit down to play even the most obscure game, are these the types of philosophical gymnastics I should be playing just to try to justify a four-dollar purchase? Does it deserve that level of intellectual scrutiny? Sure, I suppose. Most things do. Except for The Curious Expedition, of course.

It’s not that the game is bad. It’s just that it’s not a game. The same way that Cards Against Humanity isn’t a game, how Chipotle isn’t Mexican cuisine, or how Kung Fury isn’t a movie. It’s more of a blank slate than you may think, even after reading this far.

Please indulge me in a bit of self-reflection. I have had several traumatic experiences in my life that I have spent decades trying to decipher. I’m 35 years old and I played little league baseball for five seasons. Out of all of those seasons, I only actually remember about five things, and three of them are me drinking a Capri Sun after contributing nothing of value to the game. During one such fruitless matchup I was languishing in the outfield (because thats where they put the fat kid), already considering my life choices at the ripe age of eight. I spotted a humongous dead frog in the grass, and thought that the righteous course of action would be to kick it over. It looked all dry and brittle, but when it turned over, it was a festering pile of green effluvia come to life with the writhing of maggots and ants. I couldn’t have been more than nine years old. That was the first time in my life I ever smelled death. When I smell a rotting corpse (of any species), it does not make me wretch or revile in disgust. It takes me back to the first time I ever saw something in that state of existence, in that part of the cycle of life.

Laraan is not necessarily a terrible game, it is just the projection of a specific state of gaming. It feels more like a tech demo of a game that should be released a year from now. One that will probably be scrapped in favor of something clearly superior. Like the broken yet hopeful Van Buren to Fallout 3’s eventual excellence.

Playing Laraan is like kicking a dead frog during a little league game. Happy New Year.

But do you know what is recommended? A great broadband deal so you can game to your heart’s content. My friend recently changed his broadband provider through Usave and was a big fan of his savings. It is worth checking out if you aren’t happy with how much you’re currently paying.