For a movie about time travel and alternate realities, it’s only appropriate that 7 Splinters in Time has another name in the Cinequest program. In an another universe, it was called Omphalos, a word that haunts Darius Lefaux (Edoardo Ballerini), a police detective forced onto leave for mental health reasons. But are you really mentally ill if everyone agrees that someone is out to kill you, and has already succeeded twice?

Called back in to help solve the murder of his doppelganger, Lefaux finds himself drawn deeper and deeper into a surreal mystery. One of the biggest clues is that he himself cannot remember anything more than ten years prior. Complicating matters for us is a post-apocalyptic narrator (Greg Bennick) who could be spouting wild conspiracy theories on his home-made video camera, or could hold the key to the whole thing. If he doesn’t, maybe the mysteriously helpful yet aloof librarian (Austin Pendleton) does. And why does Lefaux’s therapist (Emannuelle Chriqui) call him Daniel when she first meets him, the name of the murder victim? 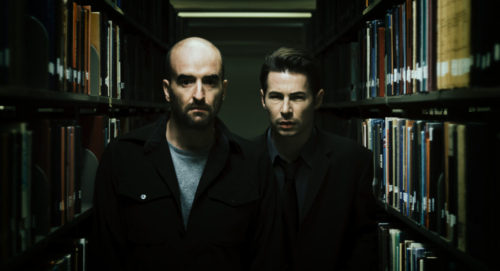 It all spirals like the mysterious tattoo on Lefaux’s arm — identified as the symbol for the Greek word “omphalos,” meaning navel. As the librarian explains, Zeus once sent two eagles to meet at the navel of the world, and somehow, maybe, Lefaux is the navel of the mystery. Certainly wherever he goes, reality is uncertain. Is he in the future? Is he in the past? And why does everything seem to glitch around him?

Writer/director Gabriel Judet-Weinshel has crafted a thriller with the DNA of several great artists before him. That’s not an insult — as Pablo Picasso allegedly said, good artists borrow, great artists steal. So though you can see traces of influences from films like La Jetee, Alphaville, and maybe even Dark City, 7 Splinters in Time will unnerve you with a power of its own. It’s as if David Lynch and Terry Gilliam had a love child.

(I couldn’t find a trailer, but I could find a YouTube link to Max Gabriel’s score — and yes, Max Gabriel is actually Judet-Weinshel. There are levels here, people.)

Cinematographer George Nicholas has used just about every film format available. While much is shot on 35mm, flashbacks seem to go to 16mm with a touch of Kodachrome, and he admits to using an iPhone 6 in a pinch. The result keeps the audience as off-balance as Lefaux. If he can’t trust what he sees, neither can we. 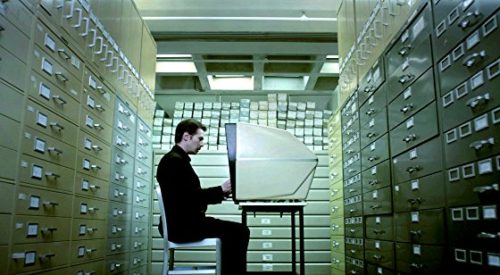 What you can trust is that this movie knows absolutely what it’s doing. To say more would be doing 7 Splinters in Time and Judet-Weinshel a disservice; if the Lynch/Gilliam comparison hooked you, you simply need to see this movie. If you don’t, another you just might, and you don’t want that to happen, do you?

3Below Fri, Mar 9 6:45 PM
For tickets, go here.
It’s film festival season again! Cinequest 2018 starts on February 27 and runs through March 11th, so if you’re in the San Jose / San Francisco Bay Area you might check out the films and events for this year. And watch Fanboy Planet for upcoming reviews and podcasts from the Planet’s crew.