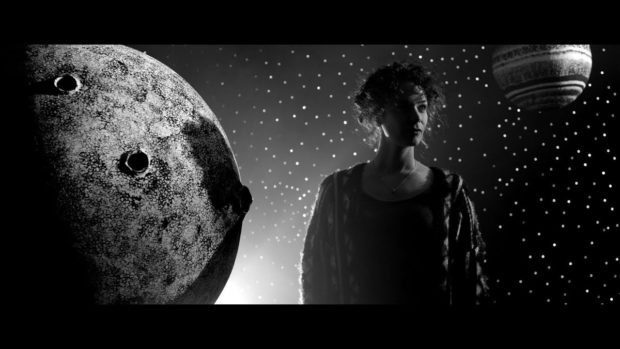 This is exactly what I love about film festivals.

Sure, a lot of the time you end up walking out of the theatre and back into daylight with a new perspective on a way of life, a hopefulness about our children’s futures, a dire warning, or even a quick little laugh. And that’s all great, very nice, a good use of time.

But occasionally you get to experience a film that mashes up a half-dozen things that shouldn’t work together, but somehow do, and exceed your growing expectations with each new creative scene. It’s the kind of film experience that has you chatting with other viewers about all the films it kind of reminds you of, but agree that you’ve really never seen something even close to this before.

And it starts with two girls getting ready for a night out.

Charlie and Hannah have friends, past lovers, prospective lovers, jobs they’re not excited about, and an evening free to get drunk and forget about things. They also have two foil-wrapped pieces of magic. Those packets may have looked like a drug, but they turn to the audience and assure us “it’s homeopathic” right before the lights begin to flash and a short kaleidoscope of psychedelica. Eventually things calm down and they decide to leave the party for other debauchery. But a door has been opened, and it’s time for a ride through.

This is where it no longer makes a lot of sense to follow the “plot.” Rather enjoy that we’re treated to a series of character introductions, tests, vignettes, an elegant bordello that offers a tryst with the Bennet Sisters, and part of town where the town’s parts discuss their own lives. The black and white of the film occasionally breaks into other soft-edged aspect ratios and old fashioned telescoping dissolves.  Scenes from earlier in the film play out later in the unacknowledged background. A quest for Tilda Swinton’s scalp is failed because, although a mummy in denial is in tow, “Fonzie” forgot to hop. It’s crazy, lovely, absurdist stuff, with sharply clever dialogue and amazingly creative situations for our characters to literally fall though.

Where else will you encounter Catherine the Great bumming a cigarette and making a reference to a sexual encounter using the Large Hadron Collider as a metaphor? Some unexpectedly high-brow dialogue occurs between Charlie’s left and right breast. And can you imagine how things go when Hannah ends up in as spooky old house where all of a sudden they’re washed in the somber blue and red lights of a Hammer horror flick? Of course you can.

Charlie and Hannah’s Grand Night Out draws deeply upon the best dialogue from late ’70s Woody Allen, Federico Fellini’s crazy night scenes, and physics and biology charmed from the films of David Lynch. I could go much further, but this is one of those cases where you’re best prepared when you’re unprepared.

Go, see the film. Trust me. This is what film festivals are for.

Oh, yeah. Don’t leave until the projector bulb goes dark or you’ll miss one of the funnier side stories resolve itself. It’s worth waiting for.