Everybody deserves somebody to love them.

As cliché as it may be, that might mean loving themselves. From the opening scenes of Wild Honey, it’s clear that while Gabby (Rusty Schwimmer) might know who she is, she’s not particularly happy with who she is. It’s not exactly that she’s self-destructive, but whatever she’s been doing hasn’t been working particularly well. But being a phone sex operator will provide her the key to change all that.

Maybe that seems unlikely to you. The middle-aged Gabby has dumped her latest waste of space boyfriend Vince (Todd Stashwick) and been forced to move back home with her mother (Paulette Cary). Constantly in the path of the criticism that only a mother can provide, Gabby tries to hold her head up high. Her job isn’t pulling in enough money (it pays by the minute), until she gets a lonely client named Martin (Timothy Omundson).

Two lonely souls have connected, and Gabby becomes willing to break some of the rules of her job in order to build her friendship with him. As it just so happens he’s an L.A.-based screenwriter and Gabby’s estranged sister Esther (Stephnie Weir) lives out there, it’s time to take a risk and have an adventure.

Written and directed by Francis Stokes, Wild Honey is a bubbly comedy with a pained soul underneath. And that’s a very good thing. At turns hilarious and touching, it’s not really about two lonely souls making an unlikely connection; it’s about a woman regaining her self-confidence and dignity. Though it occasionally veers into scenes that seem de rigeur for such a story, Stokes has created such full characters that we get drawn in and need to see those scenes.

I don’t want to say that Gabby is the role of a lifetime for Schwimmer, a character actress who has been doing memorable turns in movies and TV for years. Instead, I’m hoping this is the beginning of a breakout for her, because she gets to show so much — at turns sassy, brassy, and occasionally sad. She feels real, and in the few moments that she realizes that she’s actually happy, she lights up the screen.

Another reliable character actress mostly known for comedy, Weir has Esther tightly wound, but if you live in L.A., you know this woman. That’s not fair to L.A.; there are Esthers everywhere, seemingly all put together but barely holding it so. As the gentle soul Martin, Omundson just exudes decency and kindness, and his scenes with Schwimmer are just a beautiful budding romance to behold. Or maybe it’s just the beginning of a beautiful friendship. And that’s okay, too.

Every year at Cinequest, I get to see a movie that reminds me that maybe we’re all just struggling to get through this life, and that the journey to simple kindness, decency, and dignity is worth the trip. Wild Honey is that movie for me this year. Funny, heartbreaking, and funny again, it’s a movie about real people trying to find their place, and discovering that maybe Gabby was further along in the journey than anyone else she knows. 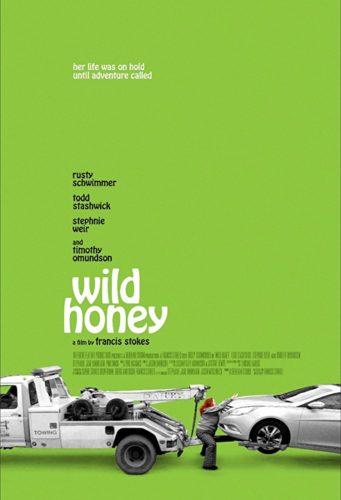