Peterloo tells the story of the 1819 massacre in Manchester which killed as many as 15 people and wounded 700 others. Veteran director Mike Leigh retells this beautifully.

While the film is based on the incident, the majority of the 2 1/2 hour runtime is all about the lead up to the event at St. Peters Fields and how those historical figures arrived on that fateful day. It follows several characters, some historical and some fictional, and the political system at the time which forces change. The crux of the film is about Parliamentary reform and an extension of voting rights; in other words the rich are getting richer and the poor are getting poorer without any influence to change their lives or conditions.

Henry Hunt, played by Rory Kinnear, is the orator and politician in which the crowd has gathered to speak despite attempts to arrest Hunt prior the crowd assemblage. While the actual events at St. Peters Field is the climatic moment in the film, the moments in which the camera follows Hunt and indeed several families is where Leigh truly shines as a filmmaker. In poor rural areas the people are struggling, whether factory workers who have no control over wages and living conditions or soldiers retiring home from war with no jobs or place to go.

The tone of the film is heavy and drawn out; after it had ended, someone at the Cinequest screening  said “Well, that was long”. And indeed the film is a test of patience for the audience, and while not nearly a perfect film, it is worth the view. One of the signature films of Cinequest mostly due to Leigh’s resume, which includes Topsy Turvy, Mr. Turner and Vera Drake, the film will find fans of Leigh’s previous work as well of those who regular BBC America or PBS type style drama, such as Downton Abbey.

The film has already been released in the UK and should be in limited release on April 5th in North America through Amazon Studios and Film4. 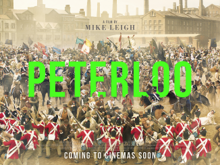