Julian Fellowes has done it again, creating a very specific period piece with a timeless connection to modern audiences.

Fellowes, the writer/creator of Downton Abbey, wrote the screenplay for The Chaperone starring Elizabeth McGovern from Downtown Abbey. Michael Engler directs. While Fellowes changed his setting from the UK to Wichita, Kansas and New York City, his sublime dialogue still draws audiences in to immediately relate to the characters and story unfolding.

The story centers on the teenage Louise Brooks (Haley Lu Richardson), who ventures to study dance at the Denishawn School in New York City in the company of a chaperone . The chaperone Norma’s (McGovern) reasons for wanting to leave Wichita are two-fold: one her husband’s infidelity, but also her desire to find out where she came from.  An orphan from New York City, Norma hopes to find information on her birth parents. While McGovern is as solid as always in the world of Fellowes, it is somewhat newcomer Richardson who takes a huge leap forward in her career.

Mostly known for supporting roles (Split, The Edge of Seventeen), Richardson really is the star of the film as it follows her growth pursuit of her dance passion. While clearly a talented dancer, Louise has some demons of her own as she tries to find herself and leave her past in Wichita behind. Fellowes deftly touches on issues of the time period subtly, such as segregation and prohibition, while still maintaining focus on the characters.

The Chaperone will get a limited release in March via PBS Films and will also release Downton Abbey The Movie written by Fellowes in September of this year, again directed by Engler. 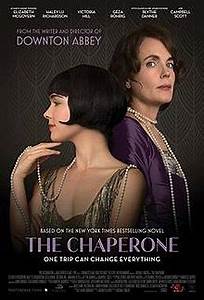