So you’ve joined the police force of Middletown, U.S.A. It’s a fairly quiet place, but there are a few things you’re going to need to know, so luckily, sometime in the late 1980s, Survival Solutions put together a VHS for training purposes. Featuring Officer Jim, it’s bright, friendly, and… it keeps going astray.

Processed and beat up just like an old VHS, Survival Skills starts out disturbingly accurate to training videos from that decade. Jim (Vayu O’Donnell) pops up on a screen next to the Narrator (Stacy Keach). He’s a simulation of a computer simulation, naive and cheerful, the perfect image of a friendly neighborhood policeman the way we used to like to think they’d be. Though he’s living in a training video with his obligatory vague girlfriend Jenny (Tyra Colar), the other characters in the video aren’t cooperating with being picture perfect. 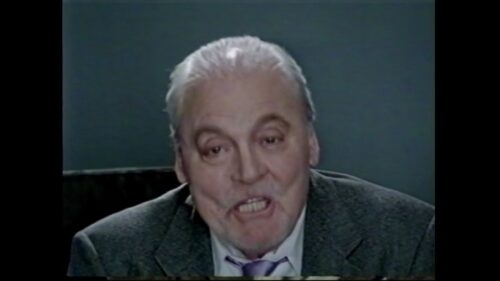 In fact, there’s a dark undertone running through Middletown, and Jim is doing his best to deal with it. The Narrator, however, grows increasingly upset at his lack of control. At times almost parodying lost police sitcoms like Holmes and Yo-Yo, Survival Skills interlaces comedy with surprising social commentary. It’s a delightfully disturbing piece, not for everyone’s taste, but at times laugh out loud funny.

It works because of O’Donnell in the center of it, playing counterpoint to the ominous seasoned presence of Keach. O’Donnell dances deftly from comedy to drama, and we can see his light demeanor struggling to win out over existential despair. Tethered by Keach when needed, O’Donnell also has great help from Ericka Kreutz as Jim’s partner, who keeps pulling him into the reality of police work.

Writer/director Quinn Armstrong keeps a tight hand on it all, playing with the medium well. It’s a careful parody, and a stinging statement. I need a term for this kind of film, reminding me in approach of films like Brigsby Bear or producer Colin West’s previous Cinequest short, “Here and Beyond.” Call it VHS chic, and if it’s in your wheelhouse, you cannot miss Survival Skills. 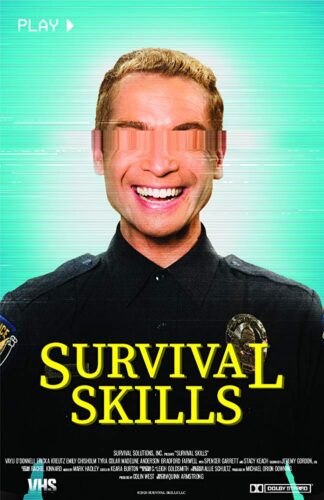 Survival Skills has its World Premiere at Cinequest Friday, March 6 at 9:15 pm at Century 20 Redwood City, and will play at the Hammer Theater in downtown San Jose on Sunday, March 8 at 7:15 pm. Tickets and further showtimes are available here.