Te morituri, röck and röll. They did say that in the gladiator arenas, didn’t they? If not, let’s say they will in our future history, and filmmaker/musician Röcket Stähr (probably a pseudonym — probably) does his best to make a case for it in his animated epic rock opera Death of a Rock Star.

Set roughly 200 years in the future but evoking the best of rock from 45 years or so in the past, Death of a Rock Star draws from many influences to tell a familiar story in a new way. It’s almost a web comic brought to life, as Stähr’s character design is mostly simplistic except for the leads, and throughout most of the film, word balloons help you keep up with the lyrics. (It might make for a pretty interesting sing-along.)

After an ultra-conservative religious takeover, the world has become dull and grey. Even the food has no flavor, though you could make an argument that no trans fats isn’t a bad thing. With no flavor, there’s no creativity, and so a survivor of the initial takeover reads, studies, and gathers a small group of rebels to create the perfect rock star clone, dubbed, of course, Rocky Starr. Given four arms to better shred on a dual axe, Rocky carries with him the spirit of Bowie, Queen, T. Rex, Mott the Hoople, and more. He’s a little bit Ziggy and a little bit KISS, especially when surrounded by his band, the Children of the Revolution. They drive around in a revolutionary tour bus that looks suspiciously like a yellow submarine. 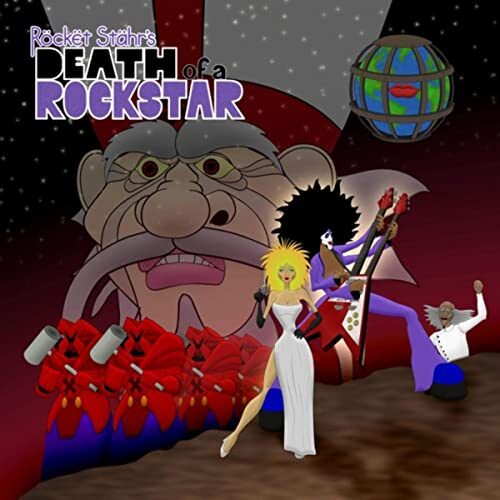 And no spoilers here: the film starts near the end, with a bullet headed right toward Rocky before the story jumps around in time. Viewpoints shift (though it’s almost always Stähr singing) and linear storytelling isn’t as important as celebrating free thought and creativity. Which Stähr also points out is stifled any time we worship idols — even when they rock — rather than just admire their gifts.

We should admire Stähr’s gifts. Death of a Rockstar is a singular vision aided by Abby Ahmad in the women’s roles, a celebration of rock and roll, and inspiration to tell your own stories in your own way. It fits comfortably alongside Yellow Submarine, Phantom of the Paradise, and Tommy. Death of a Rockstar should have a long life.

The film streams on Cinequest’s Cinejoy platform through March 30.

Death of a Rockstar’s soundtrack is currently available on Amazon digitally. Fanboy Planet is an Amazon affiliate, and any purchases made through links on this site may generate a bounty for us.