I’m doing this strictly as a Christmas gift — the timing of this display will probably pass by January 6, but if you have a chance to get to Disney California Adventure before then, do yourself a favor. Even if you’ve already seen Pixar’s Coco, visit the Bug’s Land theater and explore their display and the “preview” (really, an extended scene and the trailer). We didn’t review the movie, but it is one of my top 3 of 2017 (that I’ve seen — I’m sure I’ll get to a few in the next few weeks that might challenge it).

A film about tradition, family, and love, Coco may use the Mexican Day of the Dead as its backdrop, but it’s a beautiful family film for the winter holidays (unless you’re celebrating Festivus, then air your grievances elsewhere).  If you’ve seen previews at the Bug’s Land theater, you know they usually have a few theming pieces set up — Ant-Man, for instance, had Paul Rudd’s costume in a display case in the lobby. But for Coco, the Imagineers went all out, setting up “ofrendas” that revolve around the settings and characters, and almost make you forget which “land” you stepped out of to get there.

It makes me long for a dark ride to match, following Miguel’s journey through the Land of the Dead to get the blessing of his family. That is, if it’s not culturally insensitive. Disney and Pixar did originally blunder when they announced the project, but they really turned it around and once again proved that representation matters. Coco did what a good family film should do — not just open hearts, but open eyes. 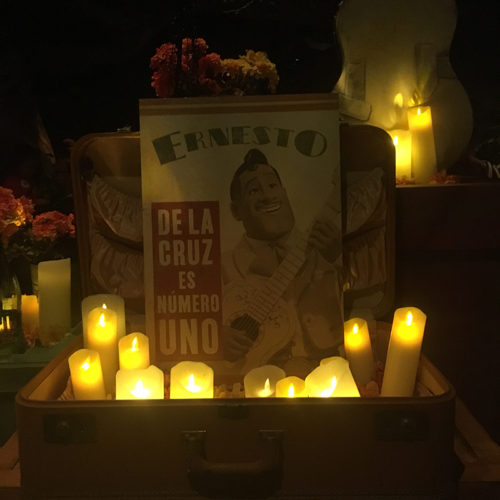 I don’t even mind the commercialism — it’s just exciting to see a whole new holiday honored and included in California Adventure’s Festival of Holidays. It’s inspired a couple of bright, exciting window displays at the World of Disney store. I haven’t broken down and bought a Hector figure yet, but I think it’s only a matter of time. At the very least, I want one of those posters. 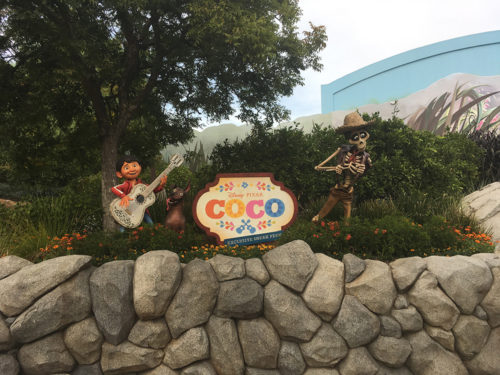