Back in the sixties, Roger Corman took the faded careers of old horror stars and gave them new life. By taking the most creative of licenses with the stories of Edgar Alan Poe, Corman practically created a genre unto itself. Giants like Karloff, Price, and Lorre lurked through these films, scaring newcomers like Jack Nicholson. At the time, they were cheap thrills. Now? They look pretty cheesy. So the moment really has passed when those Corman films could withstand being parodied. Writer/actress Cassandra Peterson must have missed that memo. Maybe it got lost in her cleavage.

Oh, she’s got the look down cold. By actually filming in Romania, Peterson and director Sam Irvin have managed to create an authentic atmosphere for the spooky goings-on. All the right characters are here: the tortured older man (usually Boris Karloff, here Richard O’Brien), his suspicious wife (Mary Scheer), and a family curse. Even the opening titles bring back those early sixties, down to the last drop of melted wax. The only thing possibly out of place would be Peterson herself, in her better-known persona of Elvira, Mistress of the Dark.

But even so, if you purposely do a bad movie version of bad movies, how good could it be? Two wrongs don’t make a right, though three lefts do.

As in her first film (remember it?), Elvira stars as Elvira, here allegedly a showgirl making her way to Paris with her servant girl Zou Zou (Mary Jo Smith). They catch a coach to the mysterious Castle Helsebus, where it turns out that Elvira bears a terrifying resemblance to the late mistress of Helsebus. And just for good measure, Vladimere (O’Brien) suffers a family disease that heightens his senses, only able to withstand the dimmest of light and softest of sounds. Of course, Elvira even walks loud. 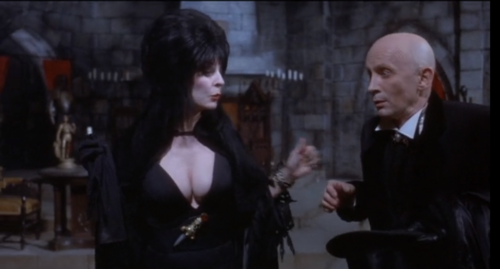 All the cast clearly has a grand time. Many of the players have been pulled from L.A.’s Groundlings Theater Company, where Peterson got her start. They have a great ensemble feel. O’Brien finally gets to play something other than terminally creepy (well, for a while, anyway – Vladimere has a split personality). In the purposely badly dubbed role of Nicholae, newcomer Remus Cernat plays earnestly dumb without seeming like a bad actor. Fabio should take a lesson here.

The sore thumb is Elvira, and though it’s intentional, it grates. The character offers up almost nothing but dumb double entendres, which can be funny in small doses. In a film with everything else so letter perfectly period (subtitles give the year as 1851), her modern viewpoint confuses everyone around her, including the audience.

Admittedly on a personal gripe, it also makes little sense that for a supposed “Mistress of the Dark,” Elvira seems to know so little about the supernatural. At least in her first film they gave the excuse that she was still learning. But here, other characters carry the burden of explaining the paranormal happenings. It works against the persona Peterson has carefully built for herself on television and in comics.

It’s a shame, really, because Peterson is so clearly a good writer. With her partner John Paragon, she proves that she has an ear for dialogue and story structure. If she applied it to something new, good things would not be surprising. Perhaps it’s time for her to move past Elvira. The rest of us have.