Meet the woman who plays Mara Jade, and please relax. She didn’t really marry Luke Skywalker. Why not? Because Luke is a fictional character. You did know that, right?

We started off the convention interviews by meeting Michonne Bourriage, the face (and hopefully someday, voice) of Aurra Sing in the Star Wars Universe. But Ultarama wasn’t through bringing conventioneers the ladies of Lucas’ dreams. Also signing was Shannon Baksa, the model hired to portray the “Expanded Universe” character Mara Jade for cards and conventions. As a nice bookend to our convention experience, Shannon asked us to keep her company at the autograph tables on a pleasant San Diego Saturday evening. With most of the fans preparing for the Masquerade, it was a lonely place. But hopefully, we made it a little more entertaining for her. 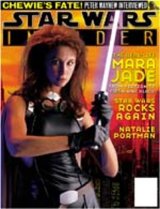 Derek McCaw: How long have you been cast as Mara Jade?

Shannon Baksa: I was hired in August of ’98, but we only shot the pictures then. I didn’t start doing appearances until I think, gosh, December of that year? So I’ll say two years. It’s been two years.

DM: You go from show to show. Do you do other work besides playing Mara? Are you an actress as well?

DM: How many kids?

SB: Just one. She’s three. Her name’s Willow, and people think that’s really interesting that I have a daughter named Willow, another science-fiction theme, so everybody knows.

DM: Did Lucas himself have to approve of you?

SB: Yes. Actually, Decipher (cards) met me, talked to me, got pictures, and they discussed it. And then everything had to go to George. It literally had to be sat in front of him, you know, “what do you think? This is the girl?” And he had to say yes or no.

DM: When you got this job, were you prepared for fandom and the way that it is?

SB: No. And I’m not sure if Decipher didn’t want to tell me or if they could have been smart in doing that or if they didn’t know. It 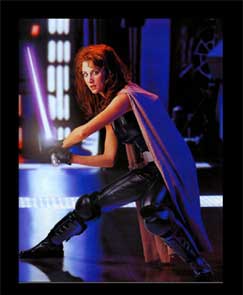 was presented to me like a modeling job. I would do this one card and maybe somewhere down the line I would have to sign a few of them but that was it. There was really no mention of anything beyond that. DM: No offense, but neither of us knew your name, though I saw you here last year. But everybody we talked to at Ultarama acted like we really should know who you are. Do you feel like you have a huge fan following as a result of being Mara Jade?

SB: Oh, my gosh. The reason they did this, the reason Decipher and Lucas did this, was because Mara is really the most popular character from the books and the comics and all of that. Star Wars Insider did an article a couple of years ago called “Who Needs a Movie Anyway?” and it was about Mara, because she’s got this tremendous following. That has nothing to do with me, and I think that what people like is that they actually finally put a face to her. Now there’s a person that they can talk to. So that’s where it is. And it was all there before I got the job.

DM: You say that you’re a face for them to talk to. Would you care to share the most bizarre convention experience that you’ve had as a result of someone talking to Mara?

SB: I don’t think there’s one in particular. I’ve had a couple of stalkers, which I think is really odd. I have people come up all the time who really live these stories. They don’t…it doesn’t click with them sometimes that I’m not Mara. It’s not reality. I had a guy come up to me a couple of conventions ago and say, “well, if you’re really Mara let me see you levitate this table.” But he was very serious. He wasn’t joking. You know you look for that “ha, ha, where’s the punchline?” and people come up and say things like that all the time. You know it’s not a joke. That’s kind of scary.

DM: Are you afraid that you might mistreat Luke in a book and have people come after you?

SB: Hey, I said I’ve had three stalkers. I’ve changed my phone number three times, my e-mail, my cell phone. I’ve had a guy follow me to the gym every day. It makes you wonder. I’m just Shannon.

DM: Let’s repeat that: JUST SHANNON. We can look around here at the convention and see people who did some science fiction thing thirty, forty years ago, padding their income by appearing at these things. Do you see yourself as Mara in twenty years?

SB: Yes and no. If they keep my face, if they keep Shannon as Mara. As long as stuff is coming out, and I’m representing her, I’ll always keep up with it and sign autographs and do everything that I can do. Will I do the convention circuit for the next thirty years? Oh, gosh, no. That’s just…it’s hard. A different city every other week through the convention season, and then overseas travel is crazy. I don’t think that I can raise a three-year-old and live like that.

DM: What do you want for yourself in the near future, your dream?

SB: Oh, gosh, this isn’t going to go over really well. I’d like to be re-married one day and have more children. I’d like to be a stay at home mom. And I know that does not sound exciting, but that’s what I’d like.

Update 2015: I’m happy to report that Shannon did indeed get re-married and has more children. She is now Shannon McRandle, and occasionally does still make convention appearances though, sadly, Mara Jade is no longer official canon in the Star Wars universe.