In a year when the movies feel flooded with superheroes, one came out of the gate early, violently and yet somewhat quietly. That would be James Gunn’s Super, starring Rainn Wilson, Ellen Page and Kevin Bacon.

We reviewed the film here, and with its imminent DVD release coming close to Comic-Con, the chance to sit down with writer/director/Demonswill James Gunn and talk about this very personal film was too great to pass up.

I first met James in 2000 when he appeared at Comic-Con to promote The Specials, a mockumentary he wrote about superheroes starring Thomas Haden Church and Rob Lowe (and James Gunn). A thoughtful man with the kind of skewed sense of humor that we treasure here at Fanboy Planet, Gunn stayed in touch and offered interviews on many major projects that followed, including Scooby Doo (Gunn remains the only screenwriter to have credit for two #1 movies two weeks in a row, with Dawn of the Dead followed by Scooby Doo 2).

Derek McCaw: We’re here at Comic-Con talking about the imminent release of Super on DVD…

James Gunn: We’re doing so well on Blu-ray. It’s really interesting because I think it just shows you who’s watching this movie – the cinephiles. Very interesting. The sales are crazy on this movie. It’s weird. It’s cool, though.

Derek McCaw: About eleven years ago, we sat in a room not too far from this one and talked about The Specials, which you wrote and acted in. Your career exploded after that (with Dawn of the Dead, the Scooby Doo movies, etc.). What drew you back to indie film?

And I think when I gave the script to Rainn Wilson is really when things cemented, because he felt the same way about the movie as I did. Once the two of us were together there was no stopping us. Because we both were unstoppable when it came to making the movie. We could have been stopped very easily. I mean, there were a lot of places where we could have given up and didn’t. We made it. We did it. 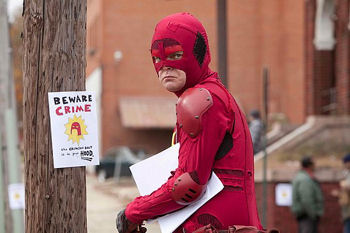 Derek McCaw: I know how he got the script, but what made Rainn the right guy?

James Gunn: The guy who played Frank had to be somebody who could handle the dramatic aspect of the role, the comedic aspect of the role, who was a big enough goof. You could imagine him getting picked on by the cook at the diner. But he was also physically powerful enough that you could imagine him beating the s*** out of people with a pipewrench.

Rainn is all of those things. There are not too many actors who fit that bill, which is one of the reasons this movie wasn’t made long before we made it. It’s very difficult finding an actor – and I’m very picky about my actors. It needs to be the right actor for the right role, and on top of that, I do background checks on all my actors, because I’m not going to work with anybody who I don’t like.

So, yeah, that’s Rainn. And Rainn also got the spiritual aspect of the movie. He has the same sort of mix of, he’s a very emotional sentimental guy but he also has a dark sense of humor, he’s very much like me. He fit the movie well.

Derek McCaw: I think it’s a surprising performance for people who are used to seeing him in The Office or even other films. I think this is the most wide range of emotion he’s ever gotten to portray on film. You’ve called this film a very personal project for you, do you feel exorcized now that you’ve gotten it out?

Derek McCaw: You wrote this script in 2002, which was really before the rise of the Real Life Superheroes.

James Gunn: The actual real ones.

Derek McCaw: The ones that are claiming to be.

Derek McCaw: How do you think that Super works as a commentary on that? We’ve had a group of police in Detroit dressing up as the Punisher, and going out and taking out criminals. I read that and I think, well, that’s what James is talking about.

James Gunn: I do get asked that question occasionally, but to me, Super is so much the story of a specific guy. I do have a hard time seeing it as relating to anything in the actual world. I think of Super as more of his journey as a human being and trying to be something extraordinary, something that isn’t quite human. Where’s the line drawn between justice and insanity?

I guess that relates to real life superheroes. But I see it more as being about all of us in different ways, the ways that we try to do that. Where does faith come in? Where is faith actually a good thing in life and when is faith telling us to do something that’s totally f***ing crazy?

Derek McCaw: When Rainn has that final confrontation with Kevin Bacon, and he delivers that monologue – it’s a beautiful monologue in the midst of so much rage. Every time I watch it I don’t know how to feel. But he is right.

Derek McCaw: But not in what he’s doing at that moment. Or is he?

James Gunn: I don’t know. I mean, I don’t know. Listen, I really, I really… I know that I personally agree with Frank in that instance. There is a type of moral relativism that is not me, you know? At the end, Jacques says “you’re a psychopath.”

I mean, yes, Frank almost kills a guy for butting in line. But then he says, “you don’t butt in line, you don’t molest little children, you don’t profit off the misery of others. These rules were set a long time ago. They don’t change.” There’s nothing about that statement that I don’t personally agree with.

Yeah, everything around it is what it is.

I also think it’s important to remember that it is a movie. This is a fable. It’s done in a real gritty manner, but it’s a fable. What is that really about? But yeah, I agree with Frank when he says that.

James Gunn: Directing him, I didn’t feel any of that, because he didn’t get the X-Men role until after. He came in and told me when we were doing ADR. Kevin came in to lay down his tracks and said, “I got a big role in X-Men.” And I’m like, “f***. That’s awesome!”<

And he was really excited, because Kevin’s a comic book fan. He was very excited. I was happy for him and plus I really dug that movie, too. There’s not too many good superhero movies and that is definitely one of them, so I was really happy for him that the movie was good.

Derek McCaw: So what are you moving on to next?

James Gunn: Well, I’ve got Movie 43 coming out, which is a Farrelly Brothers thing I did, in April.

Derek McCaw: As an actor or a director?

James Gunn: As a director. It’s a bunch of different directors doing comedy shorts. It’s got everybody from Hugh Jackman to Kate Winslet to Halle Berry. I did a short with Elizabeth Banks and Josh Duhamel, with an animated creature that’s sort of like the dragon from Pete’s Dragon. It’s a very very messed up piece of work. And I like working with the Farrellys, so that’s a lot of fun. 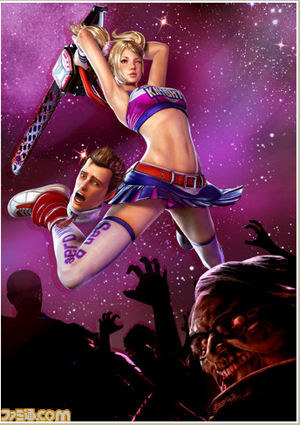 I’ve got a videogame coming out (Lollipop Chainsaw in 2012 from Warner Interactive) that I think we’re going to announce in August. I don’t know. I’m working on a couple of scripts. We’ll figure it out what’s going on in terms of features, but it’s probably another feature.

Derek McCaw: Thank you, James, we look forward to it. It’s always a pleasure.