In the roaring heart of the crucible, steel is forged. On the mean streets of your city, violence and injustice can make a man see red. And thus, we need to put a bolt on the lid of crime. Lo, there shall come a Crimson Bolt!

This is, of course, the real world, and as fantasy-satisfying as the thought may be, putting on a costume to fight crime is out and out dangerous if not crazy. Results may vary depending upon your point of view. But when Frank D’Arbo (Rainn Wilson) has been pushed too far, becoming the Crimson Bolt seems logical to him. Then again, he also has a history of visions which he may admit aren’t logical, but he makes it work.

A modern Don Quixote story, Super goes much darker than Cervantes ever did. Writer/director James Gunn doesn’t shy away from the consequences of a man losing his footing in reality and seeking cold justice. Occasionally Super settles into parody, and then something utterly savage happens, curdling the laughs. It is a comedy, but one that purposefully disturbs.

All his life, Frank has been a loser, though clearly a moral one. His finest hour was when he (sort of) helped a police officer nab a thief, followed by when he married Sarah (Liv Tyler). At least he had achieved some sort of equilibrium with his life.

At the outset, Sarah seems to have used Frank, leaving him for a skeevy local drug dealer – hard to say kingpin – Jacques (Kevin Bacon). But in bits and pieces, Gunn reveals that somewhere between the Sarah we see and the Sarah Frank has on a mental pedestal is a decent person caught in a loop of making really bad choices. 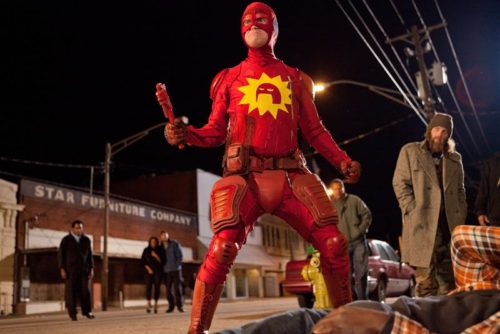 We’d like it to be simpler. Frank wallows in sorrow while watching a Christian television network that tells him it could be. On screen, The Holy Avenger (Nathan Fillion) easily overcomes Demonswill (Gunn) time and again. And when this super-powered crusader with the mane of a savior appears before Frank, things are simple.

He even picks up a sidekick, Bolty (Ellen Page). That’s not without duress, and not even with his cooperation half the time. And while Frank may be trying to bring about justice and a new Silver Age, the waifish Bolty would much prefer to be written by Frank Miller.

Luckily, she’s written by Gunn, a screenwriter who may understand the urges of fanboyishness but can’t help looking at the grime and unpleasantness lurking at their edges. With “Reals” popping up all over the country, this couldn’t be more timely.

Though superficially it bears a resemblance to last year’s Defendor (actually shot fairly concurrently), Gunn’s film doesn’t offer any easy morals. Even though his villains are definitely evil – and Bacon plays evil incredibly effectively and off-handedly – we’d have to agree with the police (Gregg Henry and William Katt) who consider the Crimson Bolt a menace, too. 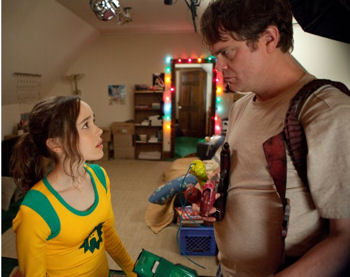 Except the police aren’t very effective here, either. And we’re wrestling with the issue again until Gunn sends us around another turn on this ethical roller coaster.

Anchoring it beautifully is Wilson giving a steady performance. At least at the start, this is the most normal Wilson has ever seemed, and while his humiliations are meant to be funny, it’s more a rueful empathy. In Frank, he creates a tender soul who isn’t necessarily dumb nor even naïve; he just wants things to be right, but life and the occasional touch of mental illness aren’t doing him any favors.

Super isn’t for everyone. Some of those who wouldn’t like it would ironically find many of their prejudgments validated by it. For the rest of us, it’s a film about vigilante justice that simply won’t make things easy. When we’ve got a season of summer blockbuster superhero movies coming, it isn’t a bad thing to stop and be made to think about it.