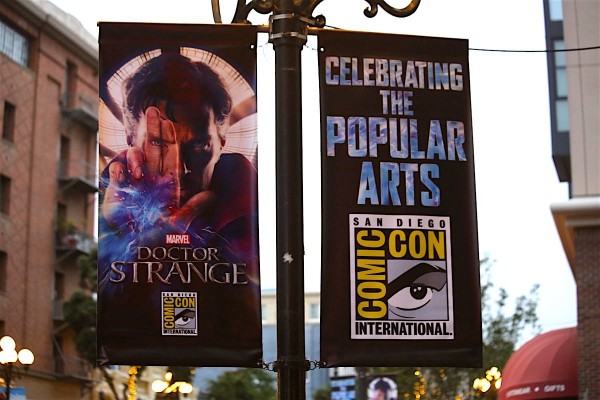 A while ago, Fox announced they would not be attending Comic-Con, and a bit of panic ensued. If that major studio wasn’t going to participate in Hall H, would others follow suit? At the time,I speculated that Marvel might not appear, because they have on occasion not participated, choosing to make announcements on their own in special events held in Los Angeles later.

Well, I was wrong. Spectacularly, thankfully, wrong. How do I know? Take a look at this tweet from Doctor Strange director Scott Derrickson:

Will I be at Comic Con this year? Here’s a hint… pic.twitter.com/ovawpnsLsj

And THAT was followed up this morning by a tweet from James Gunn replying:

Really? You’ll be so close. I might have to come see you.

So for those asking what the hot thing will be? Let’s speculate:

Scott Derrickson. Benedict Cumberbatch. Chiwetel Ejiofor. Mads Mikkelsen. Tilda Swinton. All talking Doctor Strange. Then interrupted by James Gunn, Chris Pratt, Zoe Saldana, Kurt Russell, and Sylvester Stallone to show a little something from Guardians of the Galaxy volume 2. The line-ups may not be right, but I’d say I’m going to be pretty darned close. And pretty darned excited.

And we might just get that Captain Marvel casting announcement after all.