There’s a side part of Comic-Con that most people forget exists — education. Some attendees do actually follow an academic track of panels, and obviously literacy efforts are going to be important to a convention built on comics. Along with literacy, if you point people to the right books, you might learn a little something about history. And this year, Top Shelf along with parent publisher IDW will be doing just that.

To celebrate the release of the third and final volume of John Lewis’ autobiographical graphic novel series March, Georgia Representative Lewis will be leading a “Children’s March” with students and teachers on Saturday, July 23rd, onto the convention floor. A legend in the Civil Rights movement, Lewis will be cosplaying as his younger self, one of the leaders of the march in Selma, depicted in the third volume. Yes, he’ll be doing it to promote his graphic novel, but it’s also to teach youth about the power of peaceful non-violent protest.

Lewis and his graphic novel collaborators writer Andrew Aydn and artist Nate Powell will also be signing copies of March, set for release in August but available exclusively at the IDW Booth (#2743) during Comic-Con. 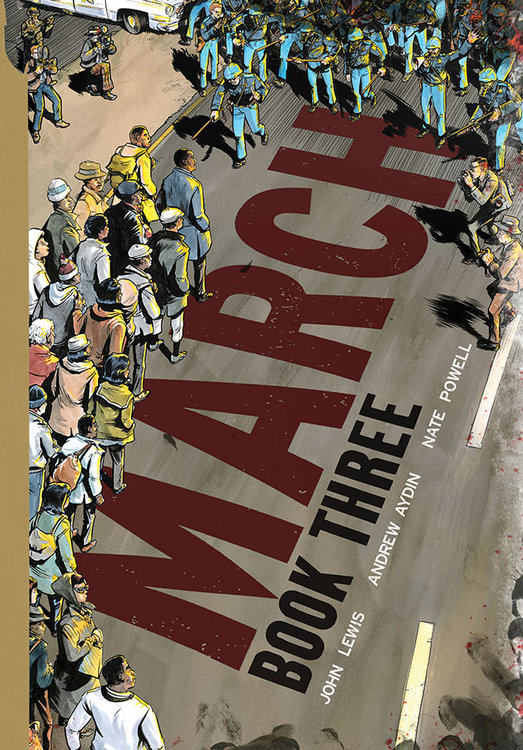 If you’re not familiar with March, the first two volumes cover Lewis’ childhood and college years, growing into his role as a leader in the Civil Rights movement and working with Dr. Martin Luther King, Jr. A powerful and moving work, it was inspired by Lewis’ memory of a comic book biography of King that he read as a child. Lewis realized that graphic novels could be an effective method of telling his story to younger generations. And yes, he is still serving in Congress and recently captured national attention by leading the sit-in for a vote on Gun Control issues. Whether you agree with his politics or not, the man has tremendous integrity.

And you say Comic-Con isn’t about comics anymore? You’re wrong. Not only is it, but it’s also occasionally about things even more important.