On the road to Comic-Con, BOOM! Studios continues spinning tales of Kong’s past. Though a completely separate project from the movie Kong: Skull Island, because the big ape is himself public domain, you could consider this a legitimate prequel.

But actually, it’s spun from both the original King Kong novel by Merian C. Cooper and from the work of creator Joe DeVito, who has done some beautiful work imagining the past of the famous simian behemoth. BOOM! Studios recently concluded a 12-issues series, Kong of Skull Island, that takes place thousands of years in the past. James Asmus and Carlos Magno worked on that book; for Kong: Gods of Skull Island writer Phillip Kennedy Johnson takes over, with art by Chad Lewis. 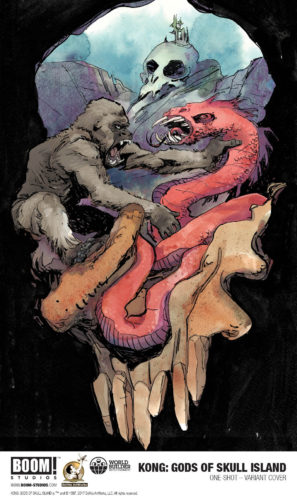 They leap forward in time, but still in an historical period we haven’t seen in regards to Kong. It’s 1912, and

…a wealthy humanitarian has traveled to Skull Island with the purpose of civilizing the native Tagatu living there. Although the Tagatu accept his gifts and allow his team to live among hem, they’re devoted to their god… and the team soon discovers that Kong is very, very real. 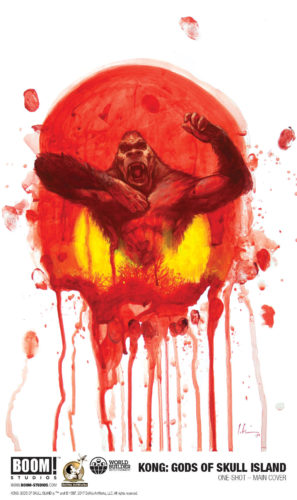 Writer Johnson says he always wanted to see more of the Tagatu’s culture in the films. As he points out, that’s not really ever been done; they’ve always been just… there, defined in the broadest of strokes. Delving into the question of how the relationship truly works between the natives of Skull Island and their protector? Brilliance. And one I’ll likely pick up to share with my son. 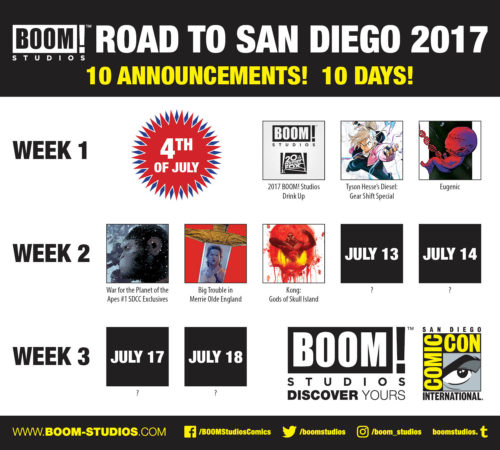