Many have tried to make the Great American Kaiju Movie. Most have failed, though it couldn’t be 100% failure because, well, GIANT MONSTERS. Until Kong: Skull Island, though, no one had struck the right balance between what we go to these kinds of movies for and what actually constitutes a good movie.

It turns out that what you need to do is take Apocalypse Now (or, if you prefer, Heart of Darkness) and let Samuel L. Jackson and a giant motion capture ape take turns standing in for Marlon Brando. (To be fair, Peter Jackson’s King Kong had some references to Conrad, too, but not nearly as subtly.)

The best lens on society is to look back and pretend that you’re not going through the same thing again. So director Jordan Vogt-Roberts and screenwriters Dan Gilroy, Max Borenstein, and Derek Connolly set the action in 1973. The war in Viet Nam is ending, and still Washington, D.C. is a powder keg. On the eve of the Watergate scandal, Bill Randa (John Goodman) is taking one last shot for his organization Monarch to prove that monsters exist. And he doesn’t mean jowly ones sitting in the Oval Office.

Randa has satellite photos of Skull Island, a legendary place surrounded by a permanent storm. Cadging a military escort for his organization, Randa will journey past the heart of darkness and into something more unexpected; at least, unexpected to the soldiers led by Samuel L. Jackson’s Packard.

The filmmakers use this set up to overturn the usual beats of the Kong story. Once on Skull Island, Vogt-Roberts’ first major set piece is an echo of the usual climactic fight of the ape versus planes (in this case, helicopters). It’s audacious and satisfying. Like all the action in the film, it’s also easy to track the conflict and actually figure out all the different ways that Kong picks off his perceived threats. Though stunning, it’s also obvious that to Kong that’s what it is. He doesn’t recognize that this expedition is human, and for other reasons not so obvious, Monarch has done more than just trespass against the delicate balance of the island.

All that gets explained by Hank Marlow (John C. Reilly), a World War II pilot trapped on the island since 1944. Living among the natives, Marlow mirrors his literary namesake; he’s gone up the river and come back with wisdom, even though he also seems unbalanced like Dennis Hopper’s photographer in Apocalypse Now. For the promise of making it back to America, Marlow will risk everything again, helping veteran tracker James Conrad (Tom Hiddleston), war photographer Mason Weaver (Brie Larson), and the remains of the expedition to escape. 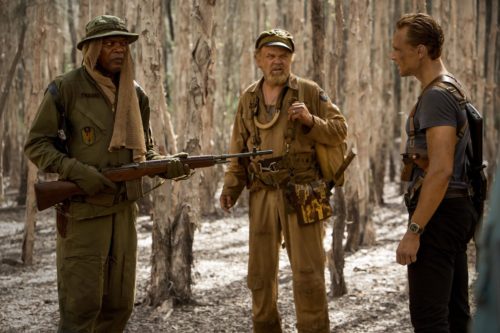 Smartly, the creative team gets the ambiguity of the usual Kong narrative out of the way, and that breathes new energy into the story. In the prologue, we see young Marlow crash and immediately encounter Kong, so there’s no “mystery” as to what that huge shape is. After that initial battle against aircraft, the crew encounters Marlow among the natives of Skull Island, and he shares with the other outsiders the lay of the land: though Kong is frightening, he’s also the protector. On Skull Island, there are many worse things than Kong, and he’s the last in a long line of giant apes fighting against the other monsters.

Infused with the moral spirit of later Toho Studios films — with which this is definitely meant to be part of a shared universe — Kong: Skull Island finally strikes the right balance that its precursor, Godzilla, failed to hit. There’s human drama with likeable, reasonably compelling characters, and there’s plenty of monsters fighting. And of course, the real monster is Samuel L. Jackson, whose eyes burn as intensely as Kong’s as he seeks vengeance against the ape for the loss of his crew.

Let me backtrack and focus on the “reasonably” part of compelling characters. Kudos for putting Hiddleston and Larson front and center, resisting the stereotypical characterization their parts had in earlier incarnations. They’re still not particularly deep, but not to the point of annoyance. As potential franchise characters for an almost inevitable Return to Skull Island, they’re a good start.

But it’s really Reilly’s show. He alternates from madman to hero and back again, delivering poignancy at just the right moments. In 1976, producer Dino De Laurentiis promised audiences that they were going to cry for the monkey; in 2017, you just might cry for the soldier, as Reilly’s sense of time lost is palpable and, let’s be honest, much more lived in than a movie about King Kong needed to be.

Don’t worry; Kong IS King here, with a fine motion capture performance by Toby Kebbell. When he appears as Jack Chapman, a soldier separated from the rest, he’s actually less convincing. Partly that’s because of the bad Southern accent he occasionally adopts, but also because he’s so clearly a sacrificial lamb that they should have just called him “Dead Meat” Chapman. (All due credit to Hot Shots for that joke.) It couldn’t all rise above the usual; the film also takes about 30 minutes to go into deeper cuts than the standard six rock songs that must always be played in Viet Nam war movies. I’ll give one point back because it’s kind of hard to avoid Creedence Clearwater Revival’s "Run Through the Jungle since so much of this is running through the jungle. 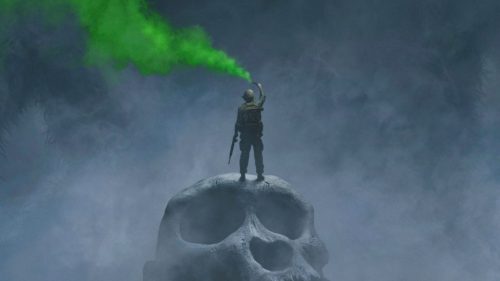 Though it shares an element with Godzilla, Kong: Skull Island seems to be resetting the franchise (there’s already a Godzilla vs. King Kong announced for 2020), and that seems like a good idea. Keep these monsters far away in our past, so that we can pretend we’ve already survived them.  And believe me, we can enjoy them.