BOOM! Studios has been doing a great job with Planet of the Apes for years. And now that they’re partially owned by 20th Century Fox, it only stands to reason that the studio behind the franchise’s revival and the comic book company that kept it alive will do a strong prequel comic. Then you’ve got a great writer who’s passionate about the concept getting to tell a piece of the story. As tie-ins go, I suspect this one’s going to be insanely good. You can pick it up at your local comics shop Wednesday, July 12, but if you’re at Comic-Con, you might want the exclusive covers.

The first exclusive cover, limited to a print run of 2,000 copies, will be available for FREE at the Fox booth (#4229) at SDCC, featuring Caesar, as played by Andy Serkis in the film. The second chase cover, strictly limited to only 500 copies, will be available for $10 at the BOOM! Studios booth (#2229), featuring The Colonel, as played by Woody Harrelson. The covers, which connect to form one image, are illustrated by Robert Sammelin (Planet of the Apes/Green Lantern). 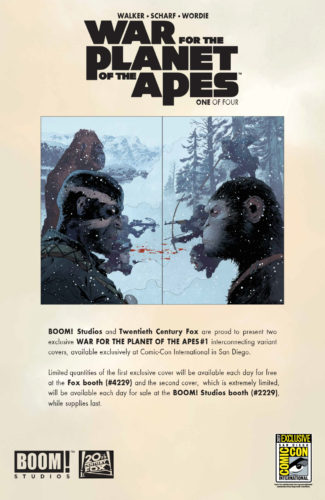 “War for the Planet of the Apes is one of the most anticipated films of the year and we’re excited to have our official prequel series launch alongside it,” said Filip Sablik, President of Publishing & Marketing, BOOM! Studios. “It’s even more exciting to team up with Fox at Comic-Con to deliver two limited-edition covers for the inaugural issue, forming one incredible image that no fan of these damn dirty apes will want to miss!”

Written by David F. Walker (Tarzan on the Planet of the Apes) and illustrated by Jonas Scharf (Warlords of Appalachia), BOOM! Studios’ War for the Planet of the Apes comic series is an original story set between 20th Century Fox’s films, 2014’s Dawn of the Planet of the Apes and the upcoming eponymous film. As Caesar and his apes recoup and recover after the Kubo-led attack on the human compound in San Francisco, the military begins moving in, setting the stage for the momentous war to come. 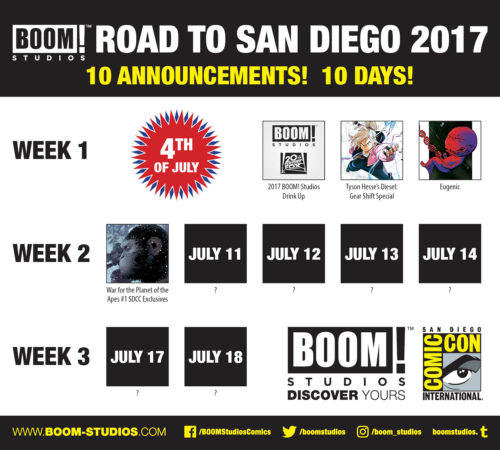