They may not exactly be the toys that haunted your childhood dreams. They look a little different. In order to keep some semblance of scale between a Transformer and a Micronaut, the Micronauts had to get really little. But a year after IDW presented its vision of the “Hasbroverse” with Revolution, Hasbro teams with IDW to return the favor at San Diego Comic-Con 2017.

It’s not quite an exclusive, as the Revolution boxed set of figures (retailing at $99.99) will also be available at Fan Expo in Canada, with a few set aside for sale at HasbroToyShop.com later. But it’s also a sweet set of figures, including a retooled ROM that for 2017, makes sense as what Hasbro should be selling. (Because if they sell this separately, there’s also the possibility of Dire Wraiths — one’s included in this set.)

The original figure was cool, but as we’ve noted time and time again, it was the story around ROM that was cooler; IDW’s revival has brought that cache back. 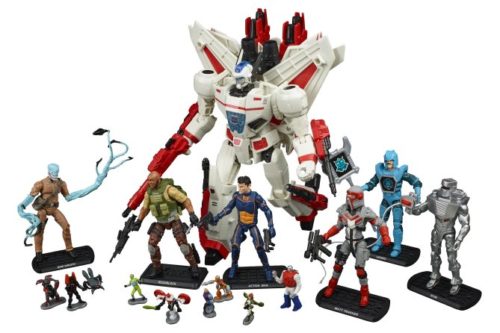 This is also the most effective way to relaunch Micronauts. Toy companies have experimented with this scale off and on over the years, and the Microverse in both Marvel’s and IDW’s visions has been diverse with alien races, cool robots, and the like. Let’s eventually get sets of micro-figures, because as explained in this interview with Hasbro’s global brand team from last summer, it’s going to be hard to get exact replicas of the original MEGO toys.

Entertainment Weekly got the full scoop, but all you really need right now is to look at these pictures and drool. In addition to Micronauts and ROM, there’s a retooled Jetfire made to match the comic book version, Roadblock from G.I. Joe, Matt Trakker from M.A.S.K., and Action Man, because you’ve got to have a message from the Action Man.

You may also notice Leoric of the Visionaries. Hasbro clearly wants to do something with the Spectral Knights of that toy set; I’m just not sure that has the rabid following that certain of their other toy lines have. Anybody have thoughts on that? Maybe this set will get fans more excited about them.