Stop me if you’ve heard this one: unknown creators release a book, it becomes insanely hot, and the entire world knows what they’ve created. Except the world might not know them. What happens when the money runs out and you’re both struggling to get by and trying to birth another creation? That’s the bare bones of Drawing Blood, a dramedy from Teenage Mutant Ninja Turtles’ co-creator Kevin Eastman and Doc Savage: Ring of Fire writer David Avallone.

On August 1, Eastman will be launching a Kickstarter campaign for the book (details below). At SDCC, he and Avallone will be paneling on Saturday, July 22 at 6 p.m. in Room 5AB, under the panel title “Kevin Eastman: TMNT and More.” UPDATE: The Kickstarter campaign has launched!

David Avallone answered a few questions about the book’s background for Fanboy Planet.

How did you and Kevin Eastman cross paths?

We were introduced by Allison Baker, at Emerald City Comic Con, and sat next to each other in a hotel bar there. We bonded over, of all things, our mutual love of 1970s DC World War Two comics (the work of Russ Heath and Joe Kubert and Bob Kanigher, etc.) The more we talked, the more we found we had in common, in spite of living very different lives. It may come as a shock for people to discover that I did not, myself, co-create a billion dollar worldwide franchise in my twenties. But even given that minor divergence, somehow we know a lot of the same people and had a whole lot to talk about. Endless show business stories late into the night, and we became fast friends. 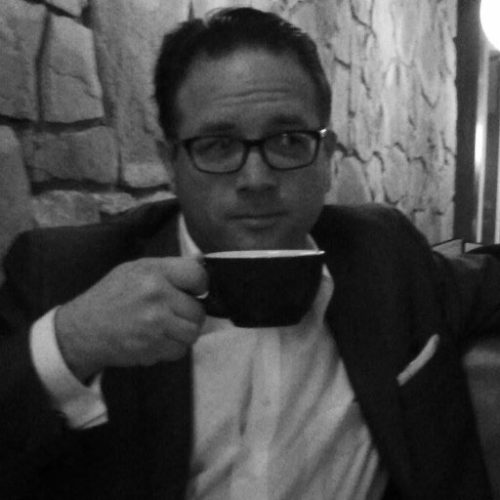 What made you the right voice for this project?

I think, initially, the life experience overlaps I discussed above… and a shared perspective on the joy and absurdity of the whole ridiculous show business lifestyle. This project was born in a variety of bars. Kevin and I were having drinks with friends at the Bayfront Hilton at SDCC when he told me he wanted to do a project like this, and gave me the broad strokes of it. He had a title – On The Shoulders of Giants – which reflects his feelings of indebtedness and gratitude to great comic creators who inspired him, like Jack Kirby.

But that wasn’t quite the right title for it, and he knew it. Just then Kevin had to go to the Con floor for a signing, and I decided to walk over with him. As we went along the bayside walkway, I was kicking around titles for the thing and by the time we got to the back door of the Convention Center I said to him, “Kevin, it’s called Drawing Blood.” He loved it. I think that coming up with the right title just then locked me in for the gig.

How does the collaboration work? Do you co-plot, then you go off and write a script?

That’s basically how it goes.

It’s worth mentioning at this point that the original idea was for me to turn Kevin’s ideas into a movie script. After going through his notes and sketches and thoughts I came back and said, “There’s too much here for a movie. It’s a cable tv show.” I even wrote a pilot script, and when he approved that, we worked together on a series bible and a first season story arc, the whole works. We made a little stab at selling it as a TV series, but the experience convinced us that it would be better, and smarter, to start this comic book project in the world that it belongs in: comic books. The TV series is the second step, not the first one.

At the beginning Kevin gave me a lot to read that he had accumulated as raw material for this project. He had a lot of notes, sketchbooks going back decades, a whole swirl of ideas and concepts that he wanted to be synthesized into a brand new whole. By the time we got to making it a comic book, I had the pilot script and series synopses to adapt, and the scripts all flow from there.

How is the process in comparison to your work with Dynamite?

The big difference is, of course, that I’m the co-creator of this series, and these characters. I love working with licenses and Dynamite has so many of the characters I love, and have always wanted to write, like Doc and the Shadow and James Bond. But this world is ours to create and shape, and that’s an even greater and more thrilling challenge.

Now you’re getting a taste of developing properties from scratch as opposed to playing with other people’s (beloved) toys. Do you have further ideas of your own that you’d like to start developing?

Many. Some I’ve tinkered with off and on over the years, and some aren’t any more than a funny title and an image, but I’ve got no shortage of material I want to turn into comics when I can. I’m hoping, naturally, that this first creator-owned series for me leads to more opportunities.

Why the Kickstarter route?

One of the interesting things that Kevin and I have in common, on very different levels, is we’re used to being our own boss. For him, in comics, and for me, in independent films. Given the choice between the high-paying job with a lot of producers and a lot of notes, or the low-paying job where I can go my own way I have always – to my sorrow, and my landlord’s – chosen the freedom over the money. I think I can speak for Kevin and say that this project is very close to his heart, and it is to mine. The world of social media, crowdsourcing and Kevin’s established fan-base, makes it possible for us to make this project without having to submit to editorial oversight from any comic book publisher. We agreed early this year that we wanted to maintain that freedom and independence, and Kickstarter was the way to guarantee it.

As an aside, my “boss” at Dynamite, Joe Rybandt, is extremely generous with creative freedom on the books I write for him, and that experience is enormously rewarding. Creatively. 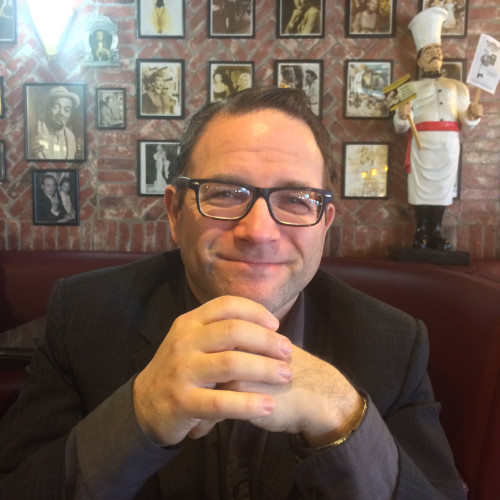 Are you ready to face Comic-Con as a panelist?

I’ve never been afraid of public speaking, for some odd reason… but this is something a little different, isn’t it? Kevin is a legend, and created something that is loved by millions around the world. To step into a partnership with someone like that has to be at least a little bit daunting. I don’t have millions of fans, myself, that I can disappoint, and I definitely don’t want to disappoint his. What puts this all to rest, for me, is Kevin himself. I’ve never worked with a more gracious and generous partner, and the collaboration is sheer joy. It’s been an amazing ride so far and I think we’re just getting started. We’ve been cooking it up for a while now, and it’ll be fun to finally present it in front of a live Comic Con audience. Wish me luck.

In 1992, Shane “Books” Bookman, and his brother Paul, released their scrappy indie creation on the unsuspecting comic book universe: The Radically Rearranged Ronin Ragdolls. To their great surprise, everyone went wild for the adventures of three feline Katana wielding mutant cats, and a multi-million dollar franchise was born.

After more than a decade and a half of global success – comics/action figures/movies and just about anything else you could sell with a Ragdoll on it — the creators imploded. Too young and too naïve to know how to handle the sudden pressures of wealth and fame, they split up, and the franchise eventually sold. 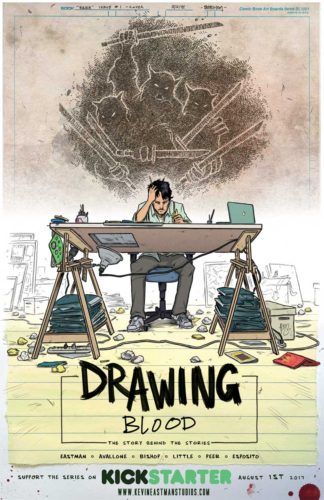 Now “Books” is hitting his forties (hard), his money all gone, his artistic inspiration tapped out, and his very life in danger from the loan sharks his crooked business partner failed to tell him about before committing suicide. It’s hard enough to recover from a catastrophic encounter with the hit and run driver called “early success,” without having to worry about killers chasing you all over town.

Drawing Blood is a dark-comic-drama (dramadey?), the story behind the stories, a look inside the twisted life of a professional cartoonist. A roller-coaster of show biz and sex, fame and infamy, controlled substances and uncontrolled artists, genius and goons, this series takes you into the darkest corners of a mad world only talked about in the hotel bars of a Comic Con.

You can follow the progress of Drawing Blood and the Kickstarter campaign at www.kevineastmanstudios.com.