When walking the floor at San Diego Comic-Con, the one thing you absolutely need is a bag to hold your stuff. Luckily, thanks to Warner Brothers, each and every attendee gets one when they first walk through the doors. The bags have undergone various iterations over the years, evolving to a semi-backpack. Last year, Warner Brothers tried including augmented reality with them, but in a place where data streaming gets slow, it wasn’t as effective an advertising model as they thought ahead of time.

This year, Warner Brothers is giving fans a leg up on what the bag is for: swag. In addition to a bag, attendees will get one of six pins featuring DC superheroes.

Fans will be trading, no doubt. But more importantly, they’ll be flashing ads for Warner Brothers movies and TV shows, including one we haven’t heard much about since it was first announced. Notice that the animated Freedom Fighters: The Ray is prominent among the bags, an animated series for Warner Brothers’ digital Blue Ribbon Content. 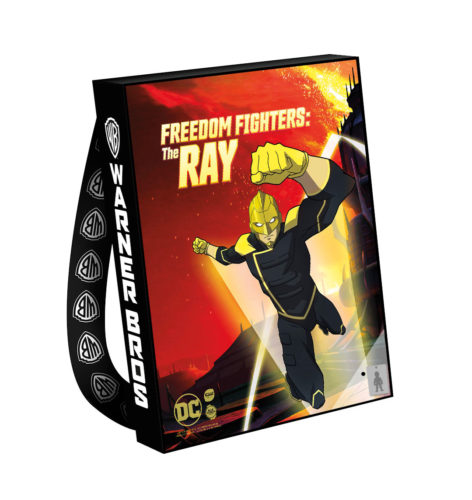 I’m not sure how that’s different from CW’s Seed, except that maybe that means it’s not in the Arrowverse, as Vixen was. But it would be cool if it were.