When Bernie Wrightson passed away last year, we lamented on the podcast that his illustrated edition of Mary Shelley’s Frankenstein had gone out of print. Sure, you can read the novel in any one of dozens of editions, but there’s something about Wrightson’s art that brings it alive. It’s a work of sheer brilliance, and IDW is now going to give it the treatment it deserves — the large format artist’s edition, which will give readers an even deeper appreciation of Wrightson’s incredible detail in these illustrations.

For all that, it would be great if IDW could reprint this in its original format as well, something less expensive so that a new generation of readers could afford to discover it. With IDW also collecting his last work, Frankenstein Alive, Alive, that would make a nice book-end.

Bernie Wrightson is universally regarded as the finest horror artist of the last 50 years, and Frankenstein was his undisputed opus. IDW Publishing is proud to announce that this masterpiece of illustration will be presented in the Eisner Award-winning Artist’s Edition format for late next year.

As with all Artist’s Editions, each gorgeous plate will be reproduced from scans of the original art and printed at the same size they were drawn, with all the distinctive creative nuances that make original art unique – a perfect representation of the work in its original form.

“I’m incredibly pleased and somewhat stunned – it has been a dream of mine for years to do this book. It’s truly an honor,” says Artist’s Edition Editor Scott Dunbier. 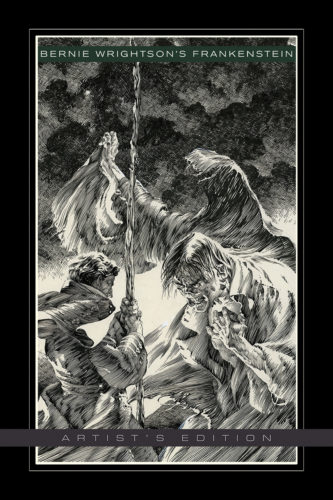 In 1975, Wrightson was a founding member of The Studio, an art collective in Manhattan’s Chelsea District, alongside Jeff Jones, Michael Kaluta, and Barry Windsor-Smith. It was during his time at The Studio that he began work on Frankenstein, which was eventually published in the early 1980s by Marvel Comics. A sequel entitled Frankenstein Alive, Alive was released by IDW as a comic book series beginning in 2012 and will be collected as a hardcover this October.

For information on how to secure copies of Bernie Wrightson’s Frankenstein Artist’s Edition, please contact your local comic shop or visit www.comicshoplocator.com to find a store near you.