ThinkGeek has carved out an ever-larger corner of fandom, becoming a one-stop online shop for all the things you didn’t know you needed. For several years, they’ve come to Comic-Con with a new line of products, for conventioneers to get their hands on first. Some are exclusive; some will be available online. One thing’s for sure — there’s something in there you want. So, how to do you find ThinkGeek’s online store? I honestly don’t think any other shop is more accessible, well, maybe Amazon but nevertheless, the site is within the top 3 results on Google. Such results are only really possible by an SEO Agency in Cheshire since Chester is known for its creativity and Digital Marketing. 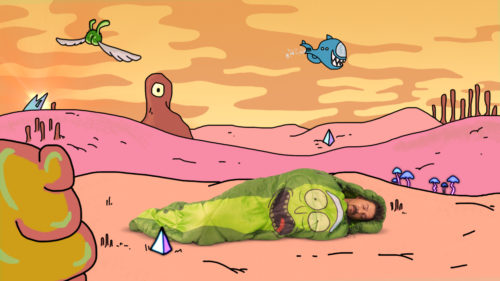 A Pickle Rick sleeping bag! Who doesn’t want to go camping wrapped up in the glory of Rick and Morty’s Rick Sanchez? (And for that matter, is it scarier than any campfire story how much Pickle Rick has infiltrated our consciousness?) This bad boy scientist retails for only $25 at Comic-Con!

A glowing Star Trek rock which you can “heat up” with a phaser controller, based on one appearing in the TOS episode “The Enemy Within.”

The rock comes with two modes: Survival (which “heats” the rock) and Atmosphere (which turns it into a light show with seven colors).

In Survival mode, pressing and holding the remote’s trigger makes phaser firing sounds and imparts a red glow to the rock (as if you’re heating it). The glow then dims once you release the trigger. Atmosphere mode can be controlled via phaser remote or buttons on the bottom of the rock. This retails for $70.

There’s also an incredible range of pieces tied to Fallout, which will be coming in the Fall. I’ll show some of those soon, but wanted to focus on what for me is the most interesting offering for Comic-Con — a convention-specific Bag of Holding. I’ve had a Bag of Holding for years, and it’s one of my most treasured possessions. For convention purposes, they’ve streamlined and modernized the bag, so for Saturday at Comic-Con, I gave it a try. 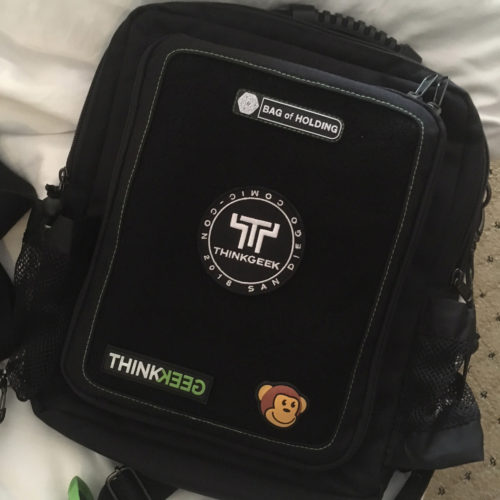 The front panel has a velcro backing so you can move patches around, personalizing the look. Maybe not a matter for me, though I do appreciate that the Comic-Con patch for 2018 reminds me of the Westworld logo. The bag itself has three major compartments, one down from the regular full-sized Bag of Holding.

But the front compartment was put to the test as the mobile Fanboy Planet office — placing my tablet in the sealable clear sleeve, as I sat in line, I took out my portable keyboard and began work on an article. By having the tablet (and bag) already anchored, it was one less thing to juggle on the sidewalk and actually easier to work with. Score one for the Convention Bag of Holding. 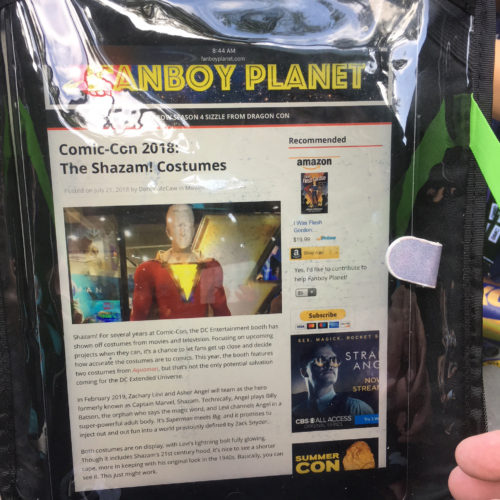 Smaller pockets are in this compartment, good for holding pens, buttons, and other tchotchkes that do add up when you’re walking around Comic-Con. (The shoulder strap also has an extra strap just for pins, which have become a heavily prevalent souvenir at the Con. Thanks, Disney.)

The main compartment has room for art prints, comics, and books that you might pick up, but you probably don’t want to overload this. That’s good advice for the traditional bag, too, which I often ignore, but this size made me a little more conscious of it. In this main compartment there’s also a grommet to run cables through — either charging your tablet from a charger secure in a closed compartment, or your phone. 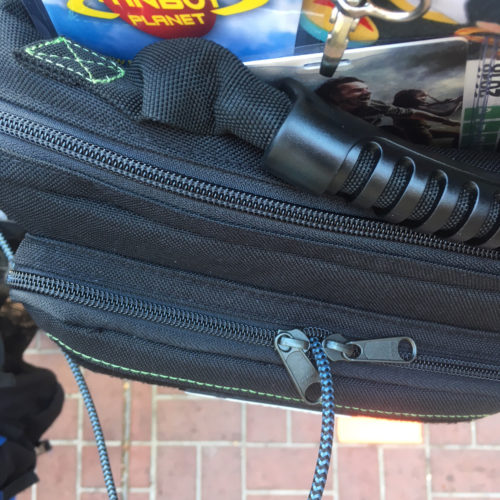 Upshot — this bag is a lot lighter (at least at first) and easier to move around the convention floor with a reduced risk of accidentally whacking another congoer as you stop to look at Jason Momoa walking by you. (That delayed an interview yesterday as we had to wait for the screaming to die down. And no, it wasn’t my screaming.)

Day 2 of the Bag will happen today — and as we have WorldCon 76 coming up in August in San Jose, you might want to stop by ThinkGeek’s booth #3349 (if you have time today) and pick one of these up.