This one’s going to have the convention floor buzzing, because it does and doesn’t make sense. Currently the comic book company with the highest brand awareness, Marvel has turned to San Diego publisher IDW to start a line of comic books and graphic novels aimed at middle-school readers. Read that again. Marvel Comics is licensing Marvel Comics to IDW to make comics.

Editorially, this saves Marvel some money. They don’t have to hire creators to work on the books, nor an editor to oversee them. That’s all on IDW, a long-established company with a great track record of both licensed and original properties, including several from Marvel’s parent company Disney. For years, IDW has worked directly with Marvel on the over-sized, beautiful but boutique “Artist’s Editions” of classic Marvel Comics’ work, recreating the original comics pages at original art sizes. And while not necessarily directly with Marvel, IDW has had the kids’ license for Star Wars comics for a year, publishing the very fun and somehow still in continuity Star Wars Adventures.

But this still seems a little strange, though good for kids if they’re going to be able to get their hands on new stories with Marvel characters aimed directly at them. Though Marvel has had some success with more kid-friendly books, they haven’t done much in recent years, though I’d argue that Monsters Unleashed, Champions, Moon Girl and Devil Dinosaur, and The Totally Awesome Hulk come close. Every time I rewrite that sentence, I come up with another example — let’s not forget Ms. Marvel — which makes this weirder to me. Except that most of those books do still seem more appropriate for teens. (But if you have not handed a child a copy of Moon Girl and Devil Dinosaur, you need to do so.)

All three of the announced books from IDW make marketing sense: in November, a Spider-Man book with both Miles Morales and Peter Parker (and Ghost Spider), just in time for Into the Spider-Verse; in December, an Avengers book, featuring the super-team that every kid in America seems to be talking about; and in January 2019, Black Panther, with a likely focus on Shuri, and yes, that’s well-deserved. Build the next generation, IDW! Long live… MarvelW?

Marvel Entertainment and IDW Publishing announced today that the two companies will develop middle-grade comic books designed for younger readers. Featuring some of Marvel’s most popular characters, the monthly issues and trade paperback collections, published by IDW, will be available for sale at local comic book shops and book retailers across the country, expanding opportunities for the next generation of Super Heroes to experience the Marvel Universe.

“From Iron Man to Captain Marvel, from the Hulk to Shuri — the Marvel pantheon has something for everyone,” says John Barber, editor-in-chief of IDW. “With this team-up, Marvel and IDW aim to bring exciting, all-new comics to a generation growing up in a Marvel world.”

Launching in November 2018, the Marvel and IDW collaboration will kick off with a Spider-Man series featuring both Peter Parker and Miles Morales, followed by an Avengers series beginning in December and a Black Panther series in January 2019. Each of these titles will serve as an easily-accessible jumping-on point for younger readers to follow the adventures of their favorite characters.

“Marvel is excited to work with IDW to share these brand-new stories with our younger fans,” said C.B. Cebulski, editor-in-chief of Marvel. “Characters like Spider-Man, Black Panther, and the Avengers inspire us through their strength and determination, but they resonate with readers because of the struggles they face and the challenges they overcome. We want to share their journeys with our younger fans first-hand.”

“Marvel is committed to delivering unique and accessible content for our younger audiences and fans,” said Sven Larsen, director, licensed publishing of Marvel. “As one of our most valued partners, IDW is the right fit to help us feature some of our most popular characters and publish stories created especially for the next generation of Super Heroes.” 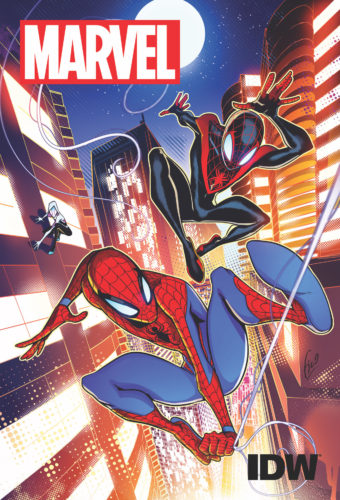 “This partnership reflects the true spirit of collaboration at work,” said Greg Goldstein, president and publisher of IDW. “As comic book publishers, IDW and Marvel are able to produce high-quality visual storytelling experiences for fans both young and old. By combining our efforts, along with Marvel’s ever-increasing presence in popular culture, the results will be spectacular.”

Story details and creative teams for the new line of middle-grade comic books will be announced at a later date.